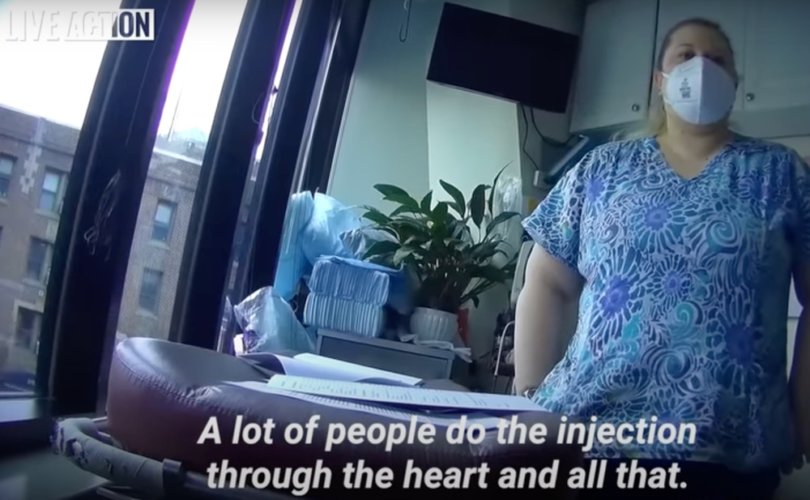 Undercover footage obtained by pro-life organization Live Action and released Thursday suggests that abortion workers at The Washington Surgi Abortion Clinic in the nation’s capital may have violated even the most basic standards of the abortion industry.

The clinic, run by by notorious abortionist Cesare Santangelo, is the same location at which pro-lifers discovered the remains of five extremely late-term babies, who may have been killed after being born alive, earlier this year.

In the video recorded in January and released Thursday, a patient asked an abortion nurse for details about the abortion procedures offered by the facility.

The nurse admitted during the conversation that staffers at the clinic do not use a feticide drug to ensure that babies are not born alive during an abortion. In the video, the nurse says that while “a lot of people do the injection through the heart and all that” to kill an unborn baby, “we don’t do that here.”

The nurse nonetheless assured the patient that despite not injecting the child with a feticide drug, the baby would “be alive when you go to sleep, but she will definitely have passed before [the abortionist] does anything.”

The remains of the child would then be disposed of as “medical waste,” the nurse said.

The nurse also told the patient that in order to get further details regarding the actual abortion, she would need to commit to the procedure and take the drug Xanax before speaking with Santangelo, the abortionist.

Santangelo had previously admitted in another undercover video nearly a decade ago he would not save a baby born alive.

According to the nurse in the video, “we have to make sure that it’s [the Xanax is] in your system before you talk to the doctor. He’s not going to be able to speak with you until he is ready to do it.”

READ: Abortionist of retrieved late-term babies once admitted he would leave born-alive children to die

Live Action president and founder Lila Rose described the footage in a press release Thursday, suggesting that the evidence shows the notorious D.C. facility “is forcing mothers to take mind-altering medications before meeting with the abortionist and giving final consent.”

Rose also highlighted the fact that according to the abortion nurse the clinic doesn’t use digoxin, which she described as “a lethal injection given to the infant in utero during an abortion to ensure the baby is not born alive during the procedure.”

“The footage also provides firsthand testimony that the Washington Surgi-Clinic may kill later-term babies without using a feticidal drug, increasing the chance that the babies would be born alive and then brutally and illegally killed,” Rose explained, adding that “[w]hether or not this drug is used, this facility is ending innocent lives through violence.”

“Tragically, this footage also shows the nurse relaying the reality that the patient may be left to deliver her dead child alone in her hotel room,” she added.

In the video, the nurse tells the patient that there’s a possibility the patient could “go into premature labor and deliver the fetus in your hotel.”

The nurse added that in that case, the abortionist “could come and help you take care of it.”

Observing that the apparent procedures undertaken by the Washington clinic violate “basic medical ethics,” Rose noted in the Thursday press release that the patient in the video has subsequently filed a complaint with the Washington, D.C. medical board.

In a press release shared with LifeSiteNews, pro-life group Progressive Anti-Abortion Uprising (PAAU) said the evidence in the video suggests “a clear violation of the ethics of informed consent and an abuse of power.”

PAAU, the pro-life group that discovered the remains of five late-term aborted babies outside the Washington Surgi-Clinic earlier this year, noted that the new evidence forms part of an “ongoing international quest for #JusticeForTheFive.”

To date, despite calls from pro-life groups and Republican lawmakers for a full federal criminal investigation into the deaths of the five babies found in D.C., no action has been undertaken to determine whether the infants were victims of illegal partial-birth abortion or infanticide.

Numerous physicians have suggested that at least some of the babies discovered in D.C. may have been born alive before being killed in violation of federal law.

PAAU told LifeSiteNews in an email Thursday night that ​​”the D.C. Police have said on the record that they’d consider an autopsy for the babies upon the discovery of new evidence. This footage is new evidence.”

“It clearly shows Santangelo was not using a feticidal injection at the time the babies were killed. This indicates the babies were likely born alive. Failure to provide care to a baby born alive during an abortion is a crime,” PAAU added. “We are demanding that the D.C. Police follow through with their public statements and proceed to investigate the deaths of these babies.”

Like PAAU, Rose ended her Thursday press release by renewing a call for “The government of DC including the Mayor, Medical Examiner, and Chief of Police” to “investigate Santangelo and his facility.”

RELATED: ​​DC abortionist accused of partial-birth abortions should be ‘behind bars’: Lila Rose

“They are not only killing children through abortion, but they may be committing illegal infanticide, as well as other federal crimes such as partial-birth abortion,” she said. “We demand justice for these babies, and the closure of DC’s House of Horrors, the Washington Surgi-Clinic.”