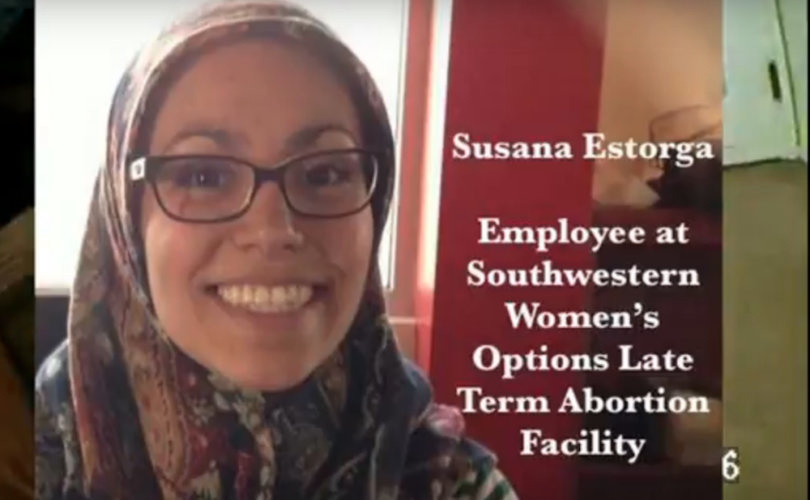 ALBUQUERQUE, New Mexico, October 25, 2017 (LifeSiteNews) – A new undercover video shows the staff of one of the country’s most notorious late-term abortion facilities offering to abort a 37-week-old baby for $17,000 and help the mother get on Medicaid to pay for it.

An undercover investigator from Abortion-Free New Mexico, identified only as Felicia, went into Southwestern Women’s Options at 37 weeks pregnant. She’d had two tests during her pregnancy that indicated her baby had trisomy 18.

“If we are to see you here in the clinic, it would be $17,000” for the entire procedure, a Southwestern Women’s Options employee told Felicia. The employee was Susana Estorga, according to Abortion-Free New Mexico.

Felicia said throughout her pregnancy that medical professionals brought up abortion to her “three different times” and focused on how difficult life would be if she chose not to kill her baby.

“It wasn’t talking positive about keeping the baby and how some parents make a good life for the baby,” she told Abortion-Free New Mexico’s Tara Shaver. “I didn’t hear anything like that.”

“Not once when I talked to the genetic counselor did I hear” about parents who didn’t abort their babies with trisomy 18, said Felicia.

Inside Southwestern Women’s Options, Felicia wasn’t allowed to bring her sister back into her consultation appointment with her.

Estorga explained to Felicia that the late-term abortion would begin with an injection to cause her baby to have a heart attack.

“The first day after you checked in, filled out paperwork, then met with the doctor, part of the procedure that happens that day is a fetal injection which lowers the heart rate and eventually stops it,” the abortion worker said. “It takes about four to six hours to stop” the baby’s heart.

The abortion facility would try to inject the baby with poison vaginally, but if that wasn’t possible, “then we’d have to go abdominally,” the abortion staffer told Felicia.

“Centro Sávila is a treatment program devoted to the recovery and healing of individuals, families, and communities suffering from emotional and psychological distress,” its website says. “Our comprehensive model of care works to decrease health disparities in Bernalillo County by providing services that include “Free Health Insurance Enrollment Assistance for Medicaid and the NM Health Insurance Exchange.”

Instead, she advised Felicia to “call the other numbers” and then contact Gonzalez directly to enroll in “emergency pregnancy Medicaid.”

“Sometimes they say, like, ‘oh, we don’t do that here,’ but they totally do. It’s just they might be a little anti” and “deflect patients.”

Gonzalez “goes above and beyond to get you covered,” the abortion worker promised Felicia. “Call her and get an appointment and she can probably get you presumptive eligibility.”

Two days after what would have been Felicia’s scheduled abortion appointment – with which the pro-life investigator never planned to follow through – she went into labor and delivered a baby boy.

“This project has uncovered the shocking reality that the medical community is knowingly relying on faulty and misleading genetic testing that leads women to local abortion facilities to kill their babies,” said Shaver. “According to known published studies, 60 percent of prenatal tests can come back with false positives on babies without any genetic defects.”

“Just sit on the toilet if the baby comes” at a nearby hotel and not inside the abortion center, the Live Action investigator was told.