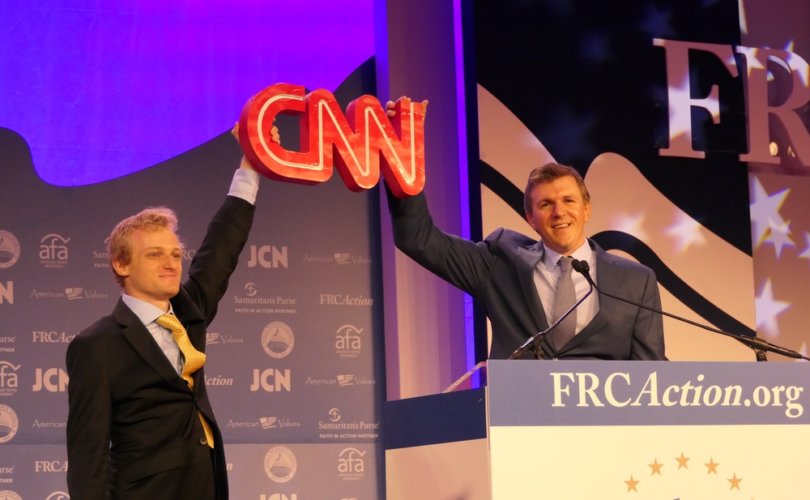 October 14, 2019 (LifeSiteNews) — The conservative investigative group Project Veritas released on Monday its first report detailing “explosive” revelations about the political machinations behind the scenes of CNN, courtesy of a whistleblower who spent months wearing a hidden camera.

Over the weekend, Veritas cofounder James O’Keefe first teased the exposé to attendees of the annual Values Voter Summit in Washington, D.C., promising that it “may be the biggest story Project Veritas has ever broke.” Veritas released Part 1 of its report on Monday, revealing the insider to be Cary Poarch of CNN’s Washington, D.C. Bureau.

The footage reveals CNN Worldwide president Jeff Zucker stressing that “impeachment [of President Donald Trump] is the story,” necessitating constant attention from network’s top reporters and analysts; claiming that “fake conspiracy nonsense” from Fox News is “beyond destructive for America”; and even chastising CNN staff for being “friendly” with Sen. Lindsey Graham (R-S.C.) to “knock that off.”

At one point in the video, Zucker responds to a producer suggesting coverage of a Democrat primary town hall on gun control by stating he didn’t care about the event and wanted to “just stay very focused on impeachment.”

Also caught on tape was CNN media coordinator Nick Neville lamenting Zucker’s habit of interfering with the network’s reporting to inject his politics.

“There are a lot of people who are out here trying to play like, just do what they think is the best of journalistic integrity,” Neville says. “Then you get on the 9am call, and big boss, Jeff Zucker, f—— tells what to do […] so if Jeff Zucker like blatantly hates Trump, and he runs CNN (which he does), it’s not gonna be positive (for you guys)…no I mean it’s not gonna be positive for Trump. He hates him. It’s gonna be negative!”

Zucker “has had an ongoing feud with Trump since The Apprentice,” he also acknowledges.

“There’s new developments [on impeachment] every day, more shoes drop, and it’s like there’s just nothing we can do if Zucker wants impeachment every single day to be the top story,” CNN media coordinator Christian Sierra admits in the footage. Sierra also confesses that he “hate[s]” how “everything is like all Trump all the time now,” and claims “everyone at the network complains about it.”

The CNN employees also state bluntly that CNN personalities Anderson Cooper, Jake Tapper, and Don Lemon all have anti-Trump biases, with Neville singling out Lemon for making audiences “think he’s objective news, but he’s blatantly opinionated […] CNN makes it appear as though we have 24 hours of unbiased news. That’s not true.”

“MSNBC is tougher on Republicans, and we’re tough on the Republicans too, more so than the Democrats,” Sierra admits. “Our Democratic interviews are like softballs, compared to the Republicans.”

Another CNN employee, floor manager Mike Brevna, recalls that the atmosphere within CNN’s halls on Election Night 2016 “was like a funeral,” with employees “sobbing” and “in shock.” In the run-up to the election CNN published numerous stories predicting a landslide victory for Hillary Clinton, with its own Political Prediction Market giving the Democrat nominee a 91% chance of winning the day before Trump defeated her.

O’Keefe promises that more footage is on the way and advertised a GoFundMe campaign to help support Poarch’s family in the likely event that CNN fires him for recording and releasing the undercover videos. He also posted a tweet October 13 claiming that Twitter is trying to suppress the results of the project.

Twitter is doing everything they can to stop #ExposeCNN and we haven’t even released the story yet.

What are you going to do tomorrow when we do @jack? https://t.co/kDe3HDdX2r pic.twitter.com/pGVdj6sush

“I was about to quit, and I wrestled with the decision long and hard,” Poarch told O’Keefe. “This is exposing most likely the biggest media conglomerate in the world. I lose sleep over it. But I decided to wear the camera because I didn’t see any other option, because I noticed that I was in a very unique position in space and time to just do something to protect the republic. To basically put everything in sunshine that I could, let the cards fall where they may, and hopefully again, dovetail into letting us at least have one more fair and free election.”