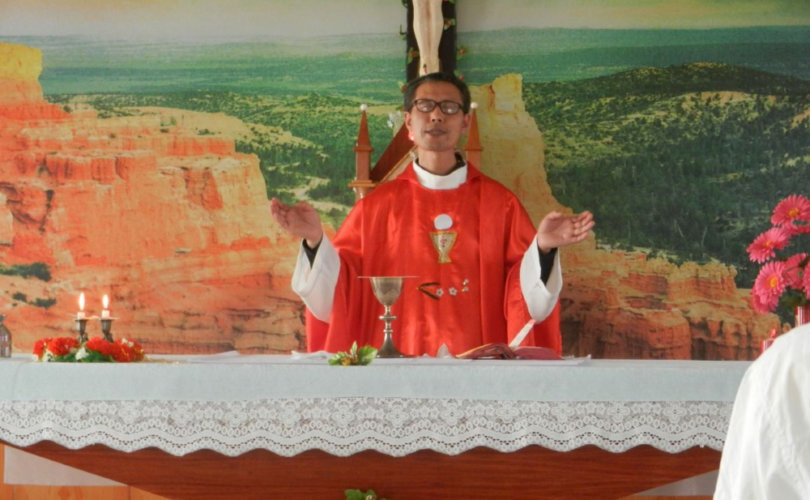 HENAN, China (LifeSiteNews) – An underground Chinese bishop has now been under arrest without being charged for nine months, in what has been described as an “illegal” continuation of arrest.

Bishop Joseph Zhang Weizhu of the Xinxiang Diocese, in Henan province, was arrested May 21, 2021 when 100 police officers and public security agents carried out a raid on a disused factory which had been used as a seminary for those who refused to join the Chinese Communist Party (CCP)-approved church.

Ten priests and 13 seminarians were also arrested with the bishop. While the seminarians were later released and forbidden to continue their studies, the priests and Bishop Zhang were taken by the Chinese authorities for “political sessions” at “Legal Education Centers,” which include “brainwashing” in line with the CCP ideology.

The priests were also subsequently released, but Zhang was not.

According to AsiaNews, the official line from the CCP was that Zhang and the priests had been invited “for tea.” Zhang had only recently returned from hospital following an operation treating cancer, when he was taken by police.

AsiaNews noted that under Chinese law, any imprisonment longer than three months without charging the individual is illegal.

However, no charge against Bishop Zhang has been made public, and his family is reportedly unaware of his location. Zhang has been allowed two visitors during his confinement, though “only for a few minutes and in the presence of police officers,” according to AsiaNews.

Sixty-three-year-old Zhang, bishop of Xinxiang since 1991, refuses to join the state-approved “church” in China, the Chinese Catholic Patriotic Association, and as such is deemed to be a “criminal” in the eyes of the CCP.

Another underground cleric, Bishop Peter Shao Zhumin, was arrested last year in his seventh arrest at the hands of the CCP authorities. As with Bishop Zhang, the authorities denied arresting him and stated that Shao was instead away for “tourism.”

The continued, secret detainment of Bishop Zhang comes on the back of religious persecution which has increased under the Vatican’s secretive deal with Beijing. First signed in 2018 and later renewed in 2020, the deal’s specific details remain undisclosed, but China expert Stephen Mosher described it as “perhaps the most controversial of a papacy dogged by controversy.”

As part of the Sino-Vatican deal, Pope Francis recognized seven bishops appointed by the Chinese government who had previously been excommunicated, even requesting that two underground, legitimate Chinese bishops cede their offices to accommodate the former schismatics. Cardinal Joseph Zen, emeritus bishop of Hong Kong, has described the deal as a “betrayal of the real Church.”

New rules implemented by China in early 2021 appeared to further remove the Vatican’s involvement and veto power in the appointment of new bishops, by effectively making the CCP the “ultimate decision maker when it comes to deciding who heads Chinese dioceses.”

China expert and Population Research Institute founder Steven Mosher told LifeSiteNews at the time that the new regulations were “a slap of the face of the Vatican.”

Additionally, all priests are now required to register in a database that will “regulate the management of religious clergy” as of May 2021. Run by the State Administration for Religious Affairs, the database will continually assess a religious minister’s loyalty to the CCP. Article III of the rules stipulates:

Religious clergy should love the motherland, support the leadership of the Chinese Communist Party, support the socialist system, abide by the Constitution, laws, regulations, and rules, practice the core values of socialism, adhere to the principle of independent and self-administered religion in China, adhere to the direction of the Sinicization of religion in China, operate to maintain national unity, religious harmony, and social stability.

Any priests who remain loyal to Rome rather than the CCP or the CCPA will not be included on the database and deemed outside the law.

Despite Pope Francis’s personal defense of the deal, religious persecution significantly increased since it was signed, which the U.S. Congressional-Executive Commission on China described as a direct consequence of the deal. The Commission’s January 2020 report directly linked the Sino-Vatican deal to increased persecution, saying:

Catholics of the Xinxiang have composed a prayer for the safe release of Bishop Zhang:

“Lord our God, Father of all peoples, you have chosen your servant, Bishop Zhang Weizhu, to be the pastor of your people. We pray that you will give him the strength and courage to face the difficulties encountered during his ministry; we pray that you will give him physical and inner peace. Through our Lord Jesus Christ, your Son, who is God, and lives and reigns with you, in the unity of the Holy Spirit, for ever and ever.”