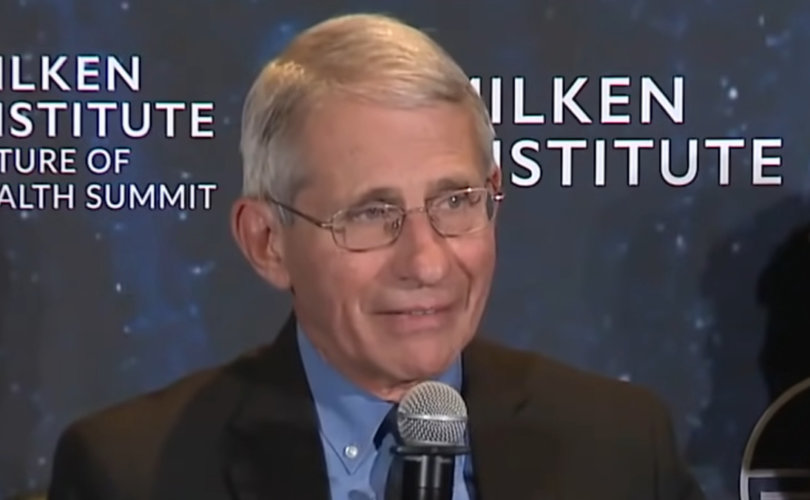 WASHINGTON (LifeSiteNews) — In October 2019, COVID czar Dr. Anthony Fauci and other health experts speculated that a new ‘China’ virus could be used to facilitate an mRNA-based, “universal” flu vaccine.

Just weeks before COVID-19 made the news, a panel of health experts met for a Milken Institute-hosted discussion on “the quest for a universal vaccine” for influenza, with the premise that there was at the time “no greater threat to global health, security, and the economy” than the emergence of a flu “that could spark the next global pandemic.”

“​​Why don’t we blow the system up?” asked the talk’s moderator, The New Yorker staff writer Michael Specter, addressing the group’s consensus that they “urgently” needed a new, “disruptive” way of quickly making vaccines.

“I mean obviously, we can’t just turn off the spigot on the system we have and then say, hey, everyone in the world should get this new vaccine that we haven’t given to anyone yet,” he continued. “But there must be some way.” Specter wondered aloud that “we live in a world where I can download whatever song I want onto my phone at command, and we grow vaccines the way we did 70 years ago.”

When Specter asked the panel how far we are from creating vaccines within a matter of hours, Rick Bright, Director of the Biomedical Advanced Research and Development Authority (BARDA), proposed mRNA technology as a way to super-expedite vaccine production:

“It is not too crazy to think that an outbreak of a novel Avian virus could occur in China somewhere, we could get the RNA sequence from that, beam it to a number of regional centers, if not local, if not even in your home at some point, and print those vaccines on a patch and self-administer,” said Bright.

Bright noted that the White House’s Council of Economic Advisers called for prioritizing “fast” development of flu vaccines. He alluded to Specter’s admission that current flu vaccines “really kind of suck” in terms of their effectiveness.

“Right now they’re, as you said, mediocre and slow. A mediocre and fast vaccine is even better than mediocre and slow vaccine honestly,” Bright said. “We need to move as quickly and urgently as possible to get these technologies that address speed and the effectiveness of the vaccine.”

Bright proposed that “in parallel” to current methods of vaccine creation, “there might be a need and an urgent call for an entity of excitement,” in contrast to what one panelist complained was “unsexy” flu vaccine work that failed to attract many young innovators. Bright further proposed that this new method would be “completely disruptive” and “not beholden to bureaucratic strings and processes.”

The panelists addressed what they saw as obstacles to a better, faster way of creating a vaccine that would have a “universal” effect against the flu. Fauci explained that such a vaccine is needed because, unlike diseases such as measles, the flu virus frequently mutates, so that infection or vaccination only provide temporary protection.

A lack of a sense of urgency behind what is perceived to be a mostly harmless virus, they agreed, was one of the main obstacles to such a vaccine, prompting Specter to ask, “Do we need to have lots of people die for that sense of urgency to occur?”

“Well, that’s the incredible thing, is that lots of people do die every year and yet we aren’t mobilizing,” said Margaret “Peggy” Hamburg, Foreign Secretary of the National Academy of Medicine and former FDA commissioner. She called for more “collaboration,” including “open data sharing” that “could unlock breakthroughs,” and praised the efforts of Fauci, the Gates Foundation, and the European Union in the field.

Fauci pointed out that “there isn’t anybody that’s afraid of influenza,” claiming there is “a misperception that it is not a serious disease.”

“So we really do have a problem of how the world perceives influenza and it’s going to be very difficult to change that, unless you do it from within and say, ‘I don’t care what your perception is, we’re gonna address the problem in a disruptive way, and in an iterative way, because you do need both,” he said.

Specter went on to ask the panel, “Would it have been a better thing for humanity if the 2009 pandemic had been much more deadly?”

Hamburg responded, “The sad truth is that when there’s a major crisis it focuses attention and usually resources and some significant mobilization follows … I think part of what other members of this panel were pointing out is, we need, number one, this time to be different, and we also need to really organize ourselves in a way where there will be accountability for sustained action and not just response.”

In concluding statements, Fauci noted that he thought it would “make a difference” if more resources were poured into such an initiative, and Hamburg again pushed for immediate action: “We really do need to have some accountability. We can’t just keep talking. We have to really demonstrate progress towards goals,” she said.

Were panelists simply “in the right place at the right time?”

The panel discussion took place during a Milken Institute summit held October 28-29. There are several reports suggesting COVID-19 spread as early as November 2019. A Chinese defector claimed in a documentary released by SkyNews that the Chinese intentionally released the virus during the World Military games, which were held in Wuhan City from October 15 to October 30.

Axios has reported that National Institutes of Health (NIH) helped develop Moderna’s mRNA-1273 vaccine under the National Institute of Allergy and Infectious Diseases (NIAID), run by Dr. Anthony Fauci, and that the NIH and Moderna signed a contract in December 2019 “that stated ‘mRNA coronavirus vaccine candidates [are] developed and jointly owned’ by the two parties.

The first signature of the agreement is dated December 12, 2019, which was only four days before the first documented hospital admission due to COVID-19, and weeks before the virus outbreak was publicized.

As of May 2020, only one of Moderna’s mRNA candidates had passed Phase 1 trials, and not one had been brought to market since 2013, when it signed an agreement with AstraZeneca to develop and commercialize mRNA therapeutic treatments.

StatNews noted in 2016 that mRNA-based treatments are “highly risky,” and that “[b]ig pharma companies had tried similar work and abandoned it because it’s exceedingly hard to get RNA into cells without triggering nasty side effects.”

Several panel members have been involved in and profited from the COVID-19 response, and most have worked with or been connected to either the Bill and Melinda Gates Foundation, or the Rockefeller Foundation.

Specter has since written and performed Fauci, an audiobook biography that discusses Fauci’s COVID-19 response as NIAID director.

Specter’s New Yorker bio notes that during his decades-long writing career, he has written about “synthetic biology,” “new ways to edit DNA with crispr,” and the “implications of gene-driven technology.”

Hamburg is a member of the Global Health Scientific Advisory Committee of the Bill and Melinda Gates Foundation and a member of the board of the GAVI Alliance; she has previously served on the boards of the Rockefeller Foundation. In 2020, Hamburg was appointed by the Council on Foreign Relations to serve on its Independent Task Force on Improving Pandemic Preparedness.

On March 8, it was announced that Bright had been appointed Senior Vice President of Pandemic Prevention and Response at the Rockefeller Foundation, after he resigned from BARDA, where he opposed Trump’s COVID-19 response.

Casey Wright’s organization, the Flu Lab, has partnered with the Bill and Melinda Gates Foundation to award funding to various groups for projects that “could provide the foundation for a future universal flu vaccine.”

Since the experimental mRNA vaccines have come to market, there have been at least 45,000 COVID deaths connected to these shots, alleged attorney Thomas Renz in a lawsuit this July. Renz said the deaths documented by the Vaccine Adverse Event Reporting System (VAERS) are “under-reported by a conservative factor of at least 5,” according to a whistleblower computer programmer who works in healthcare data analytics.

Renz has said another whistleblower has come forward claiming, “There are at least a hundred thousand reports that are not in VAERS that should be.”

The attorney believes there is a “huge conflict of interest” among public health agencies and the pharmaceutical companies responsible for manufacturing COVID-19 shots, and argued that public health officials are “hiding behind the cloak of government immunity.”