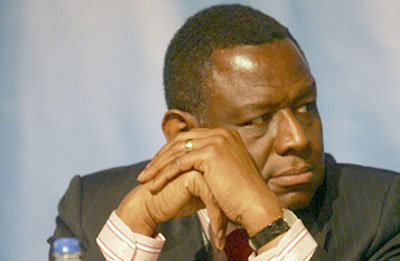 Babatunde Osotimehin, executive director of the UN Population Fund (UNFPA) said Tuesday that the Conservatives’ maternal health Muskoka Initiative “made a difference, but I think what we are trying to make out here is that we should not treat women just as bodies that deliver babies but actually as human beings with rights and dignity.”

The UNFPA official made the statements at the Ottawa launch of the agency’s 2015 report on world population, reported the Canadian Press.

The Conservatives had allocated a total of $6.3 billion from 2010 to 2020 to the Muskoka Initiative for Maternal Health, but were criticized for excluding abortion from that funding.

UNFPA: “We should not treat women just as bodies that deliver babies but actually as human beings with rights and dignity.”

“In other words, what the head of the UNFPA is saying is that Canada’s maternal health initiative, which saved lives and improved the health and wellbeing of millions of women and children, wasn’t good enough for the UN’s vision for population control,” noted Campaign Life Coalition’s Matt Wojciechowski, who represents CLC at the UN.

“If you read between the lines, according to Osotimehin, caring for mothers in need and helping them deliver their babies safely does not equate to treating them with dignity,” he told LifeSiteNews.

“However, killing their children does.”

“It’s is a terrible thing that an African official would be saying this,” says Obianuju Ekeocha, founder of Culture of Life Africa.

“The prevalent thought in Africa is that abortion is a direct attack against human life,” the Nigerian-born Ekeocha told LifeSiteNews in a telephone interview from the UK.

And promoting abortion will put him “in a very negative light” in Africa, she added, pointing out that Osotimehin, formerly Nigeria’s minister of health, returned to the country recently to publicly assure Nigerians that the UNFPA does not promote abortions.

Conservative interim leader Rona Ambrose defended the Tory policy, telling the Canadian Press that the Muskoka Initiative is “a highly respected program” and that “at last count, it had saved the lives of six million women and babies.”

“Nobody should ignore that fact that six million women and babies have been saved,” points out Ekeocha, adding that Nigeria has one of the highest maternal mortality rates in the world.

“They should only build on top of that program,” she stressed. “Pregnant women are dying. Of course we should prioritize that.”

On Monday, UNFPA’s Osotimehin stood beside International Development Minister Marie-Claude Bibeau as she pledged $81.5 million to the UNFPA to fund “reproductive rights and health initiatives.”

Bibeau told the Globe that while the Liberals are not “promoting abortion,” the funds are earmarked for improving health systems in various countries, so could fund abortion where it is legal.

“Providing the service of safe abortion may be in some countries where it’s legal, it’s part of it, and we’re not against it,” she said. “This is a difference.”

That difference, however, is evidently not enough for either the UNFPA, or Sandeep Prasad of the Action Canada for Sexual Health and Rights, who joined Osotimehin at Tuesday’s event.

Prasad said the Conservatives’ Muskoka Initiative “instrumentalized women as child-bearers and prioritized the lives of mothers over other women,”and told the Canadian Press he is looking to the Trudeau Liberals to change the that policy.

The reality is that “Canada wouldn’t be the first” to fund abortion overseas, Ekeocha said.

“A lot of countries in the EU have absolutely no problem at all funding abortion in the developing world,” she told LifeSiteNews. “It’s sort of a carrot in front of African leaders…making available funds that can only go to the promotion of abortion,” including the training of doctors to do abortions.

And “whoever is promoting abortion is always in a better position that those who refuse to endorse abortion,” she said.

Moreover, “a lot of these countries that are being targeted, many of them don’t have have legal abortion,” noted Ekeocha. “A lot of that money will be going to associations that will be lobbying for abortions, working hand-in-hand with UNFPA.”

Those associations include International Planned Parenthood Federation. In 2013, the IPPF/UNFPA launched a family planning initiative in 13 countries.

“The practice of abortion is the antithesis of helping mothers and their children,” noted CLC’s Wojciechowski.

“Every Canadian dollar that is spent on abortion and contraception is a dollar stolen from providing the world’s poor with genuine health care, nutrition, medicine,” he said.

“That is where the problem is,” Ekeocha agrees.