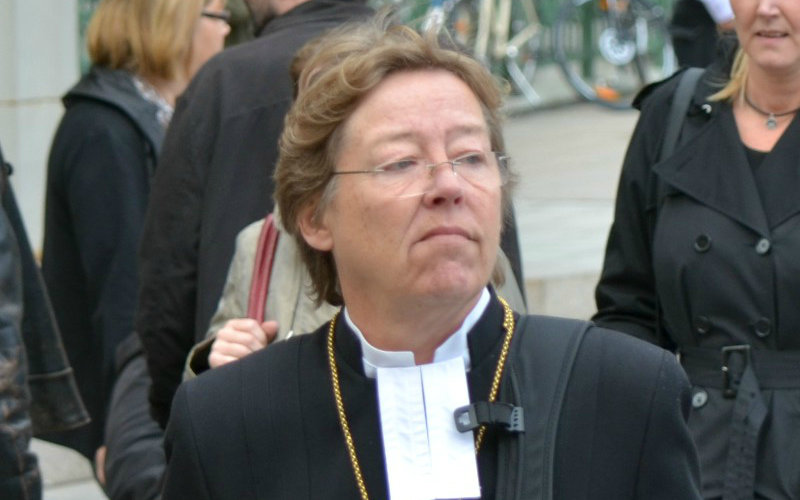 Eva Brunne is an openly lesbian bishop in the highly liberal Church of Sweden.Wikimedia Commons

August 8, 2016 (C-Fam) – For many years UNFPA leadership  has maintained that religion is one of the biggest barriers to people’s enjoyment of their “sexual rights.” The United Nations Population Fund (UNFPA) has teamed up with the Church of Sweden to convince religious leaders to accept abortion, contraception, and the sexual autonomy of children.

A recent joint event in Sweden named “Women, Faith and Human Rights,” was ostensibly aimed at proving there is no incompatibility between faith and human rights. A closer look reveals deep fault lines between religion as practiced by most of the world’s believers and human rights as interpreted by UN agencies.

A report of the event was co-published with UNFPA by the Church of Sweden, a Lutheran denomination based in one of the least religious countries in the world, with less than a tenth of its members attending services once a month. The Church of Sweden, which performs same-sex marriages and supports legal abortion, published a position statement supporting sexual and reproductive health and rights (SRHR). This term, supported by UNFPA, does not enjoy consensus at the UN due to concerns about its inclusion of abortion and homosexuality.

The vast majority of people in the world identify as religious, but in many developing countries, religious or faith-based organizations are the major providers of quality health care.

UNFPA frequently partners with religious leaders who support its aims—sometimes in opposition to the teaching of their own religion. In 2009, UNFPA prominently joined forces with the pro-abortion group Catholics for Choice, a dissenting splinter group that provides no health services, rather than one of the myriad Catholic organizations delivering medical care to the world’s poorest.

The UNFPA report was excerpted from a larger document with more detailed discussion of topics like abortion, absent from the shortened version.

Participants in the Swedish conference providing expertise on Catholic teachings included Scottish professor Julie Clague, who ended her critique of the Church with this call: “Strong advocacy is required to press for change.” Swedish Dominican sister Madeleine Fredell began by stating her conviction that she does not need to accept all Church teachings, and expressed disappointment that the then-ongoing Synod on the Family did not seem to be moving toward greater acceptance of homosexuality.

Evangelical Protestantism was barely mentioned in the report at all.

UNFPA suffered a major setback in 1994 when a coalition of religious leaders led by Pope John Paul II and traditional countries beat back an attempt to create a right to abortion at the International Conference on Population and Development in Cairo.

‘There are some voices who are actively challenging the UN rights agenda,” the new report says. “Among them are those who demand that the UN adopt the concept of the 'natural family.'” This puts UNFPA’s notion of the “UN rights agenda” at odds with multiple recent resolutions from the Human Rights Council supporting the traditional family.

The family is also described as the “natural and fundamental group unit of society” in the Universal Declaration of Human Rights, which is the closest thing the UN’s human rights system has to a sacred text.