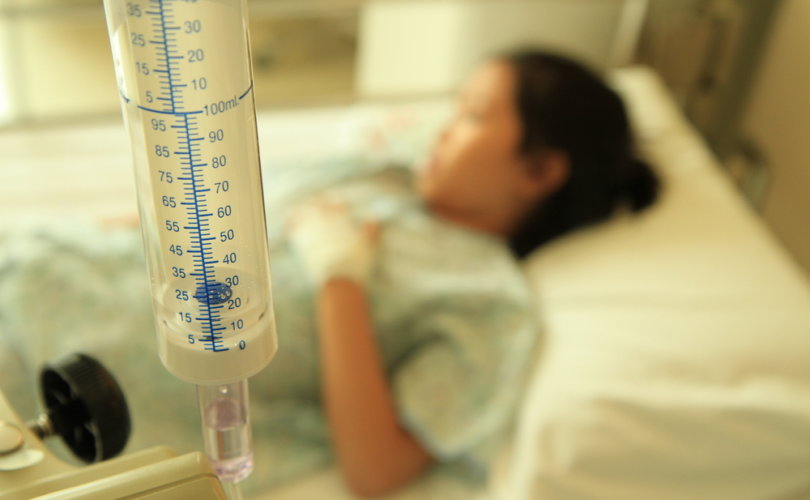 OTTAWA, May 24, 2016 (LifeSiteNews) — UNICEF Canada is pushing for assisted suicide and euthanasia for children — or “mature minors” — arguing that this conforms with the Charter, Canadian legal precedent and the UN Convention on the Rights of the Child.

That would include euthanasia or assisted suicide for mature minors who suffer from a non-terminal illness or disability, according to UNICEF Canada’s policy director Marvin Bernstein.

UNICEF, or United Nations Children’s Fund (originally, Emergency Fund) is a UN organization that is, according to its website, “on a mission to reach every child and ensure their well-being, no matter where they are in this world.”

“There’s no limit to the lengths UNICEF will go, the risks we’ll take or the depth of our commitment to save children’s lives,” it reads. “We are committed to take action, save, rehabilitate and watch over children, with a special attention to the most vulnerable and excluded groups.”

The legislation amends the Criminal Code in light of the Supreme Court’s February 2015 Carter ruling, which ruled the current ban on assisted suicide and euthanasia violates the Charter, and comes into effect June 6.

Carter ruled “competent adults” had a Charter right to seek assisted suicide or euthanasia, and Bill C-14 limited eligibility to be killed in this way to persons aged 18 and over.

The bill’s eligibility criteria also include that the individual have a grievous and irremediable disease or disability that causes unendurable suffering, is in an advanced state of irreversible decline, and his or her natural death is reasonably foreseeable.

“UNICEF believes that this right should be extended to mature minors who are competent to make end-of-life decisions for themselves,” Bernstein told the committee May 12, “but with additional potential safeguards as a measure of last resort.”

The Supreme Court had given “competent, mature minors” “the rights to make health and survival-related decisions” in its 2009 AC v Manitoba  ruling, which found that it was “arbitrary” to assume anyone under age 16 was not competent to make medical decisions, he said.

UNICEF also supported the recommendation by the joint parliamentary committee that mature minors be eligible for assisted suicide or euthanasia in the second of a two-stage legislative roll-out, “which would come into force no later than three years after the first stage is enforced,” noted Bernstein.

“In fact, this is very close to the recommendation advanced to that committee by UNICEF Canada,” he told the Senate committee.

The three-year period “would allow sufficient time for informed research and broad-based consultation to occur and the appropriate safeguards and due care considerations to be identified.”

But UNICEF Canada further proposed that in the three-year interim, children be allowed to petition a Superior Court to be allowed assistance to kill themselves, or to killed by lethal injection.

That recommendation was “so we don't have an unfair prejudicial situation continuing for three years with no remedy that can be accessed by mature minors,” Bernstein said.

United Nations General Assembly mandated UNICEF “to advocate for the protection of children's rights, to help them meet their basic needs and to expand their opportunities to reach their full potential,” Conservative Manitoba Senator Don Plett told Bernstein.

“Do you not see a major problem with the consideration of allowing vulnerable children to request assisted death?” Plett asked.  “Have these children, in your opinion, reached their full potential?”

There “may be children who are experiencing irremediable conditions, intolerable and enduring suffering,” replied Bernstein, “and they should have the right when they reach a point of sufficient maturity to make some determinations for themselves.”

If “a competent adult has the right to access medical assistance in dying, based upon a certain set of circumstances and conditions, that should not be denied, not to all children, but to mature minors,” he added.

UNICEF Canada supports euthanasia and assisted suicide in cases where the children are not suffering from terminal illness, Bernstein told the committee, adding: “I think it should be the same criteria…applied to adults and children.”

As for assisted suicide or euthanasia for children who suffer from mental illness, not permitted under Bill C-14 in its current form, “UNICEF is not suggesting psychological suffering, in and by itself, be the litmus test in terms of terminating life and making those decisions for young people,” he said.

Extending euthanasia and assisted suicide for mature minors was among three contentious recommendations in the joint parliamentary committee’s February 2016 report.

It also recommended the use of advance directives for people diagnosed with degenerative diseases such as dementia, and euthanasia or assisted suicide solely for mental illness.

Bill C-14 rejected all three, but Justice Minister Jody Wilson-Raybould promised that the Liberals would study the issues before the bill’s mandated five-year review.

That wasn’t soon enough for the Liberal-dominated House of Commons justice committee, which added clause 9.1, requiring Parliament start independent reviews of the three issues no later than six months after the bill passes.

MPs are expected to vote on C-14 on May 31, after which it goes to the Senate, which has signalled it will overhaul the bill.

The Senate committee’s pre-study report of May 17 endorsed the use advance directives, but recommended dropping further consideration of euthanasia solely for mental illness, and for mature minors.