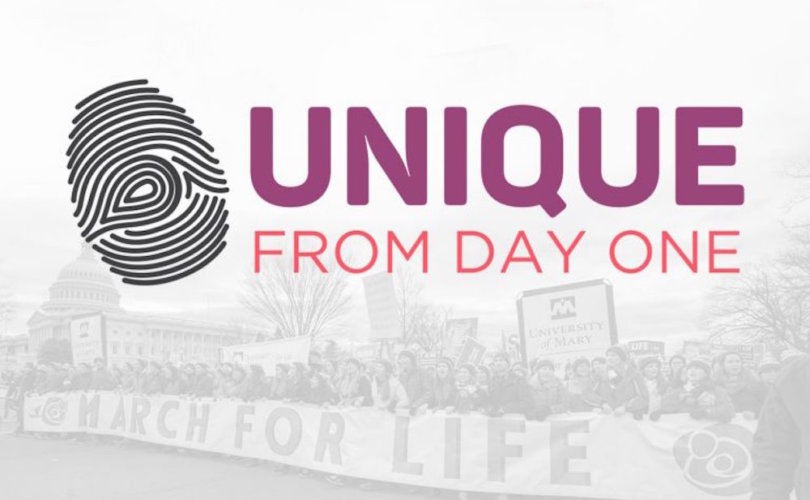 October 18, 2018 (LifeSiteNews) – The March for Life Defense and Education Fund has announced the theme for its 46th annual gathering at the nation’s capital, deciding to emphasize the science of preborn personhood in 2019.

On Friday, January 18th, pro-lifers from across the United States and around the world will gather on the National Mall in Washington, D.C., for a series of speeches and music before the main event: marching to the U.S. Supreme Court, which imposed abortion-on-demand on all fifty states with 1973’s Roe v. Wade.

The theme of this year’s march will be “Unique from Day One,” the group has announced, declaring that “science is on the side of life” and emphasizing the settled biological fact that individual human beings are not only alive but genetically complete and unique, starting with their earliest days as an embryo.

“Medical and technological advancements continue to reaffirm the science behind the pro-life cause – that life begins at fertilization, or day one, when egg meets sperm and a new, unique, human embryo is created,” the group says. “From the moment of fertilization, our DNA is present, whether its 23 pairs of chromosomes or 22.”

The theme’s banner features a fingerprint, something that “distinguishes us from any other human on the planet” and “is determined by that DNA at day one!”

“When life begins and the stages of prenatal development are scientific facts. Humanity – and our uniqueness as individuals – begins at day one, at fertilization. Life, in its most vulnerable form, should be protected,” the group concludes. “That, in essence, is why we march. We march to end abortion, with the vision of a world where the beauty, dignity, and uniqueness of every human life are valued and protected.”

Modern biology determines whether something is alive or dead, human or animal, and an organism or mere organic matter based on broadly-accepted criteria. Many mainstream, respected medical and scientific textbooks agree that a living, human organism – i.e., a human being – is present once fertilization has completed.

In addition, several prominent abortionists and pro-abortion philosophers have admitted that the preborn are alive and abortion is killing.

Complete details for attending the 2019 March for Life can be found on the group’s official website.