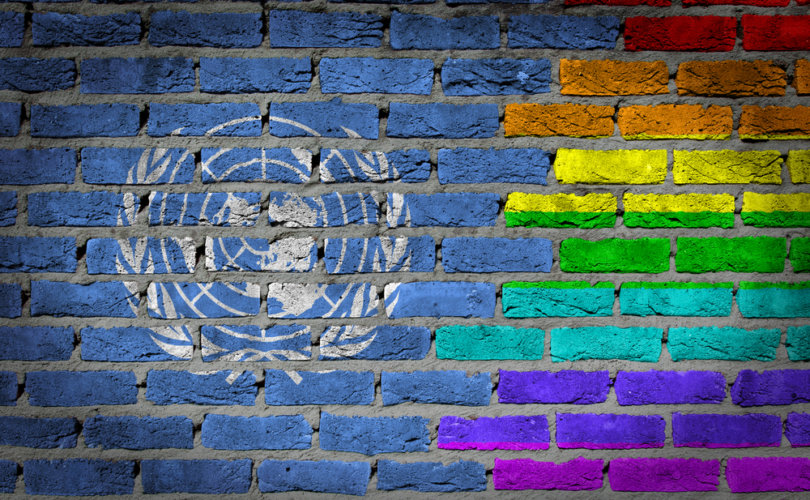 NEW YORK, New York, September 27, 2018 (LifeSiteNews) – The secretary general of the United Nations called Tuesday for the international body to “redouble” its efforts to support the “LGBTI community” around the world.

“The United Nations stands up for the rights of the LGBTI community,” Antonio Guterres said in a message to a ministerial meeting of the UN’s LGBTI Core Group. “Many of its members are imprisoned, abused and even killed simply for who they are or whom they love.”

He praised recent developments such as the Supreme Court of India ruling earlier this month that the nation’s 150-year-old sodomy ban was unconstitutional, which pro-homosexual activists hoped would promote a broader trend in the region.

“But so long as people face criminalization, bias and violence based on their sexual orientation, gender identity or sex characteristics,” he added, “we must redouble our efforts to end these violations.”

Guterres concluded his message with a promise “that the United Nations will never give up the fight until everyone can live free and equal in dignity and rights.”

UN High Commissioner for Human Rights Michelle Bachelet also called on the UN to “defend and protect” homosexuals and gender-confused people from “every” kind of “discrimination,” according to the pro-LGBT PinkNews.

The meeting was timed to coincide with the 70th anniversary of the UN’s Universal Declaration of Human Rights. Article 16 of the document affirms that the “family is the natural and fundamental group unit of society and is entitled to protection by society and the State,” though in recent years the UN has omitted the phrase from agreements, and has been reluctant to define “family.”

“It’s great, as we’ve been waiting to get something longer and more substantial than just a response to a couple of questions that he’s had before,” Maria Sjödin, deputy executive director of the pro-LGBT group OutRight Action International, told Reuters in praise of Guterres’ speech. “It’s really important not to backslide and to ensure that the human rights of LGBTI people continue to be a priority for the U.N. and the secretary general.”

The secretary general’s remarks placing undefined “bias” on the same plane as literal violence against homosexuals align with conservatives’ objection that pro-LGBT activists use LGBT “rights” as a pretext for goals such as redefining marriage and silencing any disagreement with homosexuality or recognition of differences between the natural family and same-sex unions.

The UN has a long record of promoting the LGBT agenda in ways that go far beyond human rights, such as calling for elementary school children to be taught “non-judgmental and accurate information on sexual orientation and gender identity/expression”; promoting social acceptance of homosexuality and legal recognition of perceived “gender identity”; imposing same-sex “marriage” on countries; and prohibiting treatment for unwanted sexual attraction.

“Freedom of expression and expression of religion” are “not absolute” rights, UN Independent Expert on sexual orientation and gender identity Vitit Muntarbhorn said last year, and can be curtailed if doing so is deemed necessary.