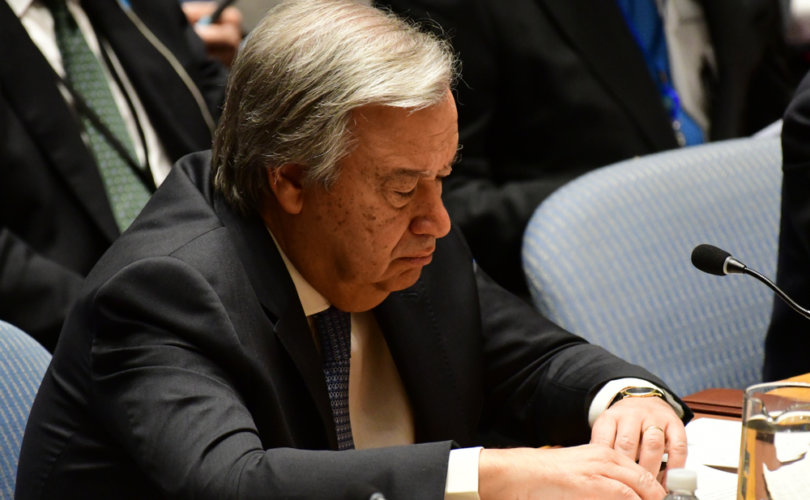 March 11, 2019 (C-Fam) — In a speech to the U.N. Human Rights Council last month, U.N. Secretary-General Antonio Guterres announced that the U.N. system is going after what he calls “hate speech.”

In a February 25th speech in Geneva, Guterres said the rights enshrined in the Universal Declaration of Human Rights “belong to everyone, everywhere. They are independent of nationality, gender, sexual orientation, race, religion, belief, or any other status.” It should be pointed out that U.N. member states have never agreed that “sexual orientation” is a protected category of nondiscrimination. This is an invention of the U.N. Secretariat and various U.N. committees.

Guterres said he is alarmed, however, “by the shrinking civic space in every region — and every corner of the internet.” He said activists and journalists are targeted by “campaigns of misinformation,” posing a danger to their lives. This and much else in the speech seems to point to his disapproval of President Donald Trump who, along with the president's supporters, have sharply criticized what they see as the partisan nature of the mainstream media.

The Secretary-General said he is alarmed by “a groundswell of xenophobia, racism, and intolerance — including rising anti-Semitism and anti-Muslim hatred,” and that “hate speech is a menace to democratic values, social stability, and peace.” He said hate speech “spreads like wildfire through social media, the internet, and conspiracy theories.”

In an apparent reference to Trump and to leaders like Victor Orbán of Hungary, Guterres is concerned with speech that “stigmatizes women, minorities, migrants, refugees, and any so-called 'other.'” He says, “Hate is moving into the mainstream — in liberal democracies and authoritarian states alike.”

Under the guise of “human rights,” Guterres wants speech stopped that he says presents false information about policy differences. He specifically mentioned policy claims made by opponents to the Global Compact on Migration. He said opponents of the Compact initiated a “flood of lies about the nature and scope of the agreement.” What this suggests is Guterres proposes speech he and others on the left disagree with.

The United States has a long history of accepting even vile speech. Many years ago, outright Nazis were allowed to march through the mostly Jewish town of Skokie, Illinois. This was protected by the leftwing ACLU and ultimately by the U.S. Supreme Court.

In recent years, however, conservative speakers deemed “hateful” have been hounded off of taxpayer-supported colleges and universities. Large tech companies now routinely “de-platform” those voices they disagree with, voices that tend to be conservative on public policy issues. Some governments in the European Union have banned certain types of speech. Evangelical preachers have been hassled for preaching on public streets in certain parts of Great Britain. Two years ago, France made certain pro-life speech illegal. In the Colorado baker's case, pro-gay speech has been compelled by the government. Polls in the United States show that young people on the left are willing to limit speech they disagree with.

Experts are concerned that Guterres seems to agree that certain speech that he deems wrong must be stamped out, and that he sees it as the role of the United Nations apparatus to silence it.