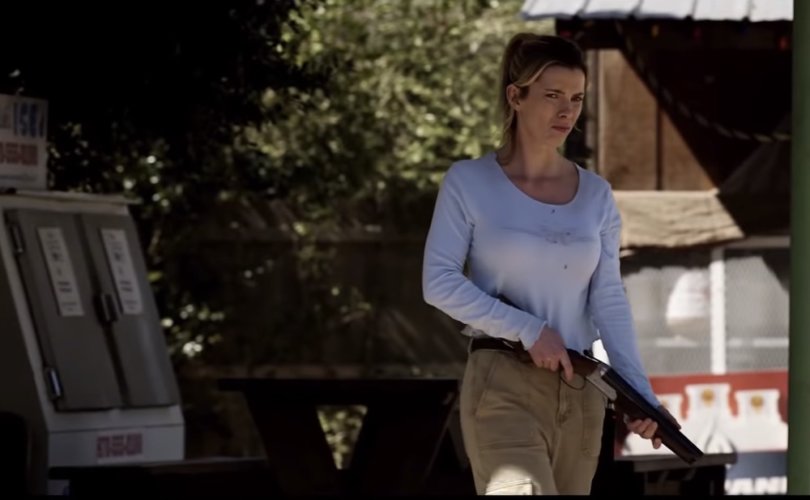 August 13, 2019 (LifeSiteNews) – Universal Pictures will not release a controversial thriller about wealthy liberals hunting conservative Americans for sport following intense backlash against the film’s political connotations as well as concerns about the timing of releasing a violent movie so soon after mass shootings in Texas and Ohio.

Originally slated to open September 27, The Hunt “follows 12 red-state strangers who wake up in a clearing and realize that they’re being hunted by liberal elites,” according to Deadline. “Betty Gilpin and double Oscar winner Hilary Swank play women on opposite sides of the political spectrum, conservative and liberal, who are targeting each other.”

“We pay for everything, so this country belongs to us,” Swank’s character declares in the film’s trailer. Later, another character explains that “every year, a bunch of elites kidnap normal folks like us … and hunt us for sport.” The Hollywood Reporter added that the screenplay features a character referring to the President of the United States (presumably Donald Trump) as “ratf***er-in-chief,” to which another quips, “nothing better than going out to the Manor and slaughtering a dozen deplorables” (Hillary Clinton’s infamous label for Trump supporters).

It’s not entirely clear how the politics of the final product were to play out; the trailer depicts the “liberal elites” as the villains while at the same time one of their would-be victims, played by Gilpin, commits several brutal killings as well. Yet many on the right, including Rev. Franklin Graham and the president himself, condemned The Hunt as a violent, left-wing power fantasy:

….to inflame and cause chaos. They create their own violence, and then try to blame others. They are the true Racists, and are very bad for our Country!

The very development & filming of “The Hunt” shows just how sick the liberal left in Hollywood are. That they would spend money to make such a violent, politically-charged film like this, considering the state our country is in, is inconceivable. 2/3

Several ads for the film were pulled after mass shootings in El Paso, Texas and Dayton, Ohio. On August 10, Universal announced that “after thoughtful consideration, the studio has decided to cancel our plans to release the film. We stand by our filmmakers and will continue to distribute films in partnership with bold and visionary creators, like those associated with this satirical social thriller, but we understand that now is not the right time to release this film.”

“I fully support the decision by Universal and the filmmakers regarding The Hunt,” Swank added. “It is a choice that I also personally felt was necessary. I can’t comprehend the violence happening in our county right now. We should all focus on healing, and above all else, kindness, sensitivity(,) and humanity.”

IndieWire reported that, according to its sources, Universal made the decision to scrap the release before Trump’s comments. It’s widely assumed that the company will eventually release The Hunt, but when is unknown.