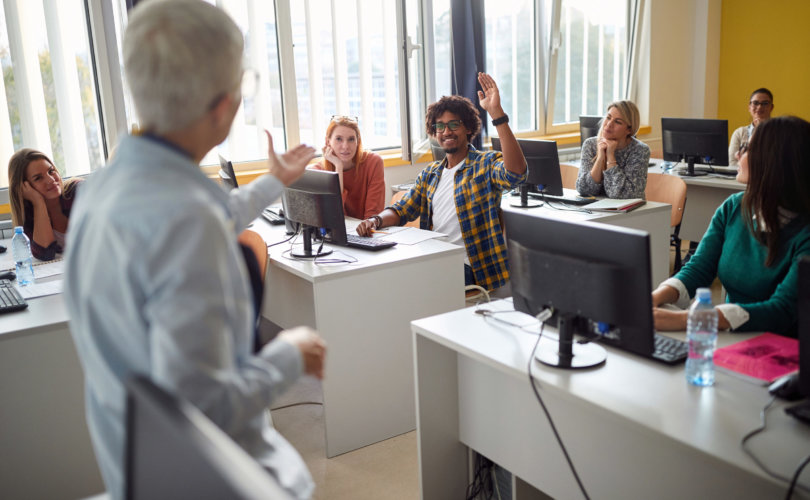 March 4, 2021 (LifeSiteNews) – A new study exploring political biases in academia over a decade demonstrates “that a majority of conservative academics experience a hostile environment for their beliefs in U.S., Canadian, and British universities.”

According to Kaufmann, the study is the first of its kind investigating political discrimination in academia and authoritarianism by surveying professors and graduate students in social sciences and humanities faculties (SSH) at universities in the United States, Canada, and United Kingdom. His findings constitute “hard data on the absence of viewpoint diversity (in universities) and the presence of discrimination against conservative and gender-critical scholars.”

In the top 100 U.S. universities, the study found that 73 percent of academics are liberal, 22 percent made no affiliation, and only around 5 percent are conservative. Less than half of left-leaning professors would be comfortable in a close social situation with someone who voted for Donald Trump, with that number plummeting to a quarter if the voter is critical of transgenderism, i.e., holds to the biological truth of man and woman.

Among his main findings, Kaufmann noted that more than 90 percent of Trump supporters and 80 percent of Brexit supporters (Britain leaving political union with Europe) working in academia reported discomfort in expressing their views to colleagues, while more than 50 percent of all conservative academics in North America and Britain have admitted censoring their own work, be it in teaching or research. This is compared with around 8 percent combined slightly-left and far-left academics who believe their department is hostile to their political beliefs.

Kaufmann’s study also revealed a tendency of younger academics, including Ph.D students, to favor their ideological opponents being fired for holding “controversial” beliefs than do their older counterparts. Kaufmann warned that the trend signifies “progressive authoritarianism is likely to get worse in the coming years.”

Generally, though, Kaufmann found that less than 10 percent of academic staff members support “hard authoritarianism,” which includes dismissal campaigns, social media smears, and disciplinary action. That being said, “a significantly larger group” of left-leaning academics are unwilling to challenge free speech infringements, the burden of which lies upon “a significant minority of right-leaning academics and doctoral students.”

But being “cancelled” is “the tip of the iceberg” as far as Kaufmann is concerned.

In terms of “soft discrimination,” Kaufmann explained it is again a minority group of conservative academics who, dissenting from consensus views, suffer from prejudices regarding “hiring, promotion, grant applications, publishing, the allocation of teaching and research tasks, workplace civility, and social inclusion.”

His findings show that, left or right, discrimination arises at similar rates. The key distinction that puts conservatives at particular risk is “the heavy leftward skew among staff at virtually all universities, and among students – especially at elite institutions.”

Soft discrimination is much more broadly practiced among the ranks of leftists, according to Kaufmann’s study, which found that “not only a near-majority on the far left, but also some center-left and even centrist staff” would support softer censorship measures against their right-wing colleagues.

As a result, most conservative academics report self-censorship, with the problem being of particular concern in the United States, where 70 percent of professors admit to taking such measures.

The leftist bias in academia has intensified dramatically since the 1960s, at which time leftists outnumbered conservatives twofold. Now, that ratio has shifted to a 10-1 average bias of leftists over conservatives. This vast left-leaning proportion within academia has, according to Kaufmann, discouraged conservatives from pursuing careers in SSH university departments, with “70 percent to 80 percent” of current conservative academics saying “their departments are hostile environments for their political beliefs.”

The high proportion of left-leaning academics somewhat explains a lack of pressure from within tertiary-level institutions to engender a freer academic environment.

Kaufmann concluded that interest in academia is stifled among conservative-minded individuals, in part on account of the difficulty found in attainting an academic job and of progression thereafter based solely on their political beliefs. In like manner, more conservative professors retire early than their liberal counterparts, increasing the disparity of political thought and entrenching the already implacable biases.

Kaufmann observed that, in the “four decades” that this “problem” has existed, no internal measures have proved capable of redressing the growing levels of discrimination against conservative academics. Since “(u)niversities cannot reform themselves,” Kaufmann proposes they “require external intervention.”