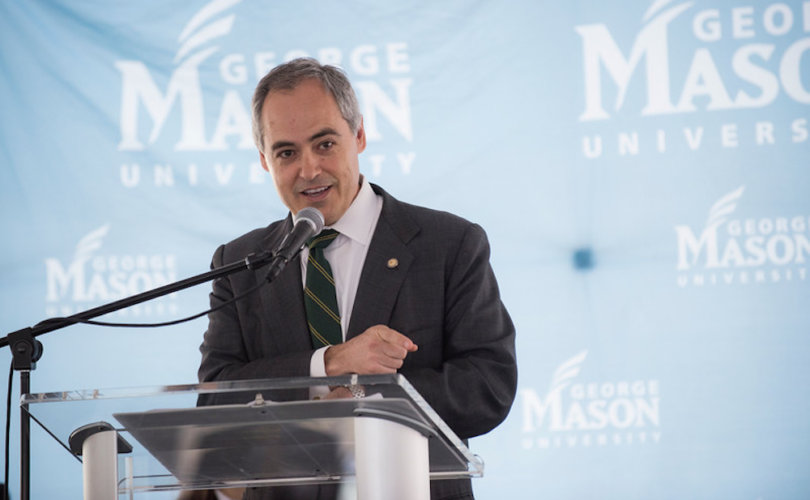 FAIRFAX, Virginia, November 15, 2016  (LifeSiteNews) — If you believe in traditional, natural marriage, then you are “piece of useless trash” in the opinion of an assistant admissions officer at George Mason University, a Virginia public school just 15 miles from the nation’s capital.

The National Organization for Marriage wants GMU to disavow Andrew Bunting’s comments so as not to give prospective applicants with conservative, Christian, heterosexual values the idea they aren’t welcome. “We want the university to publicly repudiate the remarks,” NOM’s Joseph Grabowski told LifeSiteNews. “Right now, the clear implication of the comments, when they come from the admissions officer, is that they won’t be welcome if they hold conservative views on marriage.”

Bunting, an assistant admission officer at the university, was responding to NOM’s triumphant blog posted the day after the federal election, which “heartily” congratulated Donald Trump and his team on their “incredible win.” In the blog, NOM announced that it was committed to working with the president-elect and  “confident that our voice and our views will be important in a Trump administration.”

This was followed with NOM’s action plan for the next four years — one likely favored by millions of Trump voters. It starts with getting conservatives appointed to the Supreme Court because “such justices will inevitably reverse the anti-constitutional ruling of the Supreme Court imposing same-sex “marriage” on the nation in the Obergefell decision, because that decision lacked any basis in the Constitution.”

Second, get outgoing President Barack Obama’s string of “illegal, overreaching executive orders” rescinded, including his “dangerous gender identity directives.” Third, reverse the Obama administration’s foreign policy of withholding foreign aid from countries that won’t accede to the “LGBT agenda.” And fourth, get the First Amendment Defense Act passed “to protect people who believe in marriage from being targeted by the government for persecution.”

According to Grabowski, NOM has “hundreds of thousands of email subscribers” who received the outline of the plan the day after the election. He speculated that, because of the result, “people may a little braver about sharing their views than they were the day before the election.” Someone passed on NOM’s plan to Bunting.

He evidently saw red: “NOM, a recognized HATE group by the Southern Poverty Law Center … seeks to limit life. Limit liberty. Limit Freedom. Limit the pursuit of happiness for millions of American[sic]. If you agree with them then that is your opinion. Just know that to the rest of us you are a piece of useless trash.”

GMU president Angel Cabrera responded to the election with a statement of inclusion without referencing Bunting’s comments.

Grabowski responded, “We are used to seeing a double standard from advocates for diversity. Tolerance is OK as long as it doesn’t apply to conservatives. It is almost Orwellian doubletalk.”

Asked about various comments from Trump about illegal immigration, Grabowski told LifeSiteNews that the “NOM wanted to keep the discussion focused on issues related to the public good and away from inflammatory comments from anyone.”

GMU issued the following response to LifeSite. “Mr. Bunting’s comments on his personal social media page reflect his own personal views. The university does not agree with his comments, and they do not reflect the views of the university.”