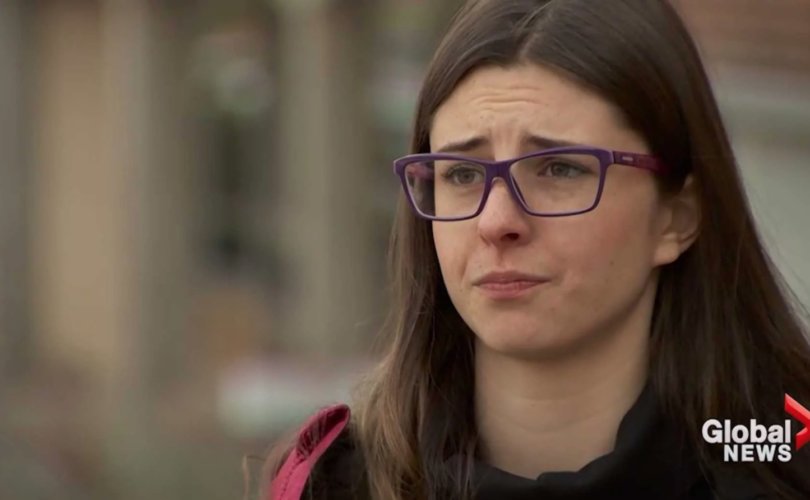 WATERLOO, Ontario, November 21, 2017 (LifeSiteNews) — An Ontario university has apologized to a grad student after faculty subjected her to an investigation for showing a clip, in a neutral way, of a University of Toronto professor opposing the transgender agenda.

Last week, Lindsay Shepherd, a teaching assistant at Wilfrid Laurier University, went public with a tape of a private meeting in which three faculty members reduced her to tears, berated her for creating a “toxic climate” in class and repeatedly suggested she’d broken Canada’s new law enforcing the use of gender neutral pronouns.

Ironically, Shepherd got into hot water by showing students an interview clip of controversial professor and psychologist Jordan Peterson, who warned from the outset the law would lead to compelled speech in Canada.

Wilfred Laurier University’s President and Vice-Chancellor Deborah MacLatchy released a letter Tuesday saying “through the media” she was able to listen to the audio of the meeting Shepherd had with three faculty members, and which Shepherd secretly taped.

“After listening to this recording, an apology is in order. The conversation I heard does not reflect the values and practices to which Laurier aspires. I am sorry it occurred in the way that it did and I regret the impact it had on Lindsay Shepherd.”

“Everything that has happened since the meeting has given me occasion to rethink not only my approach to discussing the concerns that day, but many of the things I said in our meeting as well,” Rambukkana wrote.

Shepherd played a video in two communications tutorials of Peterson’s interview with TVO’s Agenda with Steve Paikin on the subject of the controversial Bill C-16.

Peterson predicted the bill, which prohibited discrimination based on “gender ideology and expression,” would lead to “compelled speech” and forcing people to use gender neutral pronouns or neolgisms such as “zer” and “ze.”

After a student complained, Shepherd was summoned to the meeting with Rambukkana and associate professor Herbert Pimlott and Adria Joel, the university’s manager of gendered violence prevention and support.

Rambukkana told Shepherd she should not have remained neutral about Peterson’s views, and compared doing so to playing and not debunking a speech by Adolf Hitler.

In his apology, Rambukkana said he should have used different wording.

“I meant to use it to drive home a point about context by saying here was material that would definitely need to be contextualized rather than presented neutrally, and instead I implied that Dr. Peterson is like Hitler, which is untrue and was never my intention.”

He also apologized for not providing support for Shepherd during the meeting.

“I should have seen how meeting with a panel of three people would be an intimidating situation and not invite a productive discussion,” he said.

However, despite apologizing for mishandling the meeting, Rambukkana defended the meeting’s purpose as “finding out why a lesson on writing skills had become a political discussion, and making sure harm didn’t befall students.”

Shepherd said during the meeting she presented the material “critically” and that “I disagree with Jordan Peterson…I disagree. But you guys seem to think that I’m pro-Jordan Peterson, or something.”

She responded to the apologies on Twitter with a warning:

Moral of the story: A university must be repeatedly publicly shamed, internationally, in order to apologize (oh, but keep the task force & investigation). Even then, ambiguous about free speech. Also, make sure to secretly record all meetings or they won't take you seriously.

Peterson warned there will be more of the same.

This is precisely why I opposed Bill C16. And this is no anomaly: it's the new norm for universities. Here's what I said last year: https://t.co/WxrxxNjyEz https://t.co/G1htWUiwFD