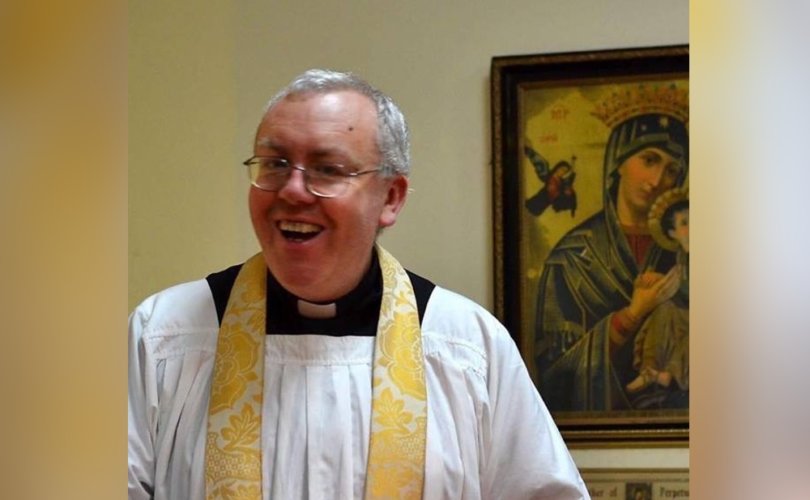 GLASGOW, Scotland, July 20, 2018 (LifeSiteNews) – A Catholic priest has been fired from his position as a university chaplain for advertising a rosary in reparation for a homosexual “pride” parade.

Father Mark Morris, the Catholic chaplain for Glasgow Caledonian University (GCU), was removed from his ministry to students after complaints that he had advertised a rosary of “reparation for the gross offence to God which is Pride Glasgow” on a website. The event took place on Monday in Immaculate Heart of Mary Church in Balornock, where Morris is the parish priest. The advertisement has been taken down.

The story was immediately picked up by British media yesterday and splashed throughout papers all over Scotland.

Yesterday GCU expressed “great disappointment” in Fr. Morris. Today its principal, Professor Pamela Gillies, stated, “Following due consultation, Father Mark Morris will not return to his chaplaincy role at the University in September. The University will work with the Archdiocese of Glasgow to ensure the continued provision of chaplaincy support for students and staff at our Faith and Belief Centre when the new term starts.”

Members of GCU’s Catholic Community were outraged that their chaplain was removed. In a statement posted on Facebook yesterday, they wrote:

“The Catholic Community at GCU would like to express our full support and solidarity with Fr. Mark Morris at this time. He is a faithful priest who has served our community with joy, dignity, and a smiling face for many years now. We are extremely disappointed that the university have decided to dismiss Fr. Morris. It is frankly abhorrent that a Catholic priest would be dismissed from his post as a Catholic chaplain for merely reaffirming the teachings of the Catholic faith.”

Doubling down, the Catholic students made their own critique of Pride Glasgow.

“The Church is very clear that any sexual acts committed outside the context of marriage are sinful,” they wrote. “Naturally, it would therefore be expected that the Church would not align herself with a movement like ‘Pride’, which promotes sexual promiscuity and celebrates extra-marital actions which are considered gravely sinful.”

They stated that their chaplain had made it clear on several occasions that same-sex attracted persons are called to a life of chastity, and that this did not mean they were not welcome at chaplaincy or had “fallen short of the love of God.”

“Anyone who knows Fr. Morris will know he…is very careful to be truthful but also charitable. He is well-loved by the students and spends a lot of time with the homeless, providing them with meals and a listening ear,” they wrote.

The students pointed out that the reparation service was scheduled for Morris’s parish church, and had nothing to do with his duties at GCU: “The media, for whatever irrelevant and cruel reason, have decided to focus on his role as a University Chaplain. We think this association is unfair and unnecessary.”

They accused GCU of having a “very warped understanding” of “equality and diversity” as “they have permitted absolutely no diversity of opinion [on Pride Glasgow] whatsoever.”

“We are very sad to see that the opinions and beliefs of Catholics are not valued or respected at the university chaplaincy,” they said.

Ricardo German, a Brazilian graduate student who has attended Masses celebrated by Fr. Morris in Balornock, told LifeSiteNews that the expulsion of the priest from the university was a result of the de-Christianization of Scotland.

“GCU’s removal of a gentle priest like Fr. Morris to please the deeply political homosexualist movement shows the consequence of accepting a ‘secular’ political structure,” he said. “Sooner or later, the ‘secular’ will become ‘secularist’ and all taxpayer-funded institutions like GCU…will not be satisfied until they have forcibly cast God and morality out of society for good.”

The firing of Fr. Morris follows swiftly behind a physical attack on another Glasgow Catholic priest last week. Canon Tom White was spat on, menaced with a pole, and subjected to a shower of anti-Catholic verbal abuse during an annual Orange March. It also comes after Glasgow City College inexplicably forbade its Catholic chaplain from celebrating a scheduled Mass on Ascension Thursday.

LifeSiteNews reached out to Fr. Morris for comment but has not yet received a reply. A source known to LifeSiteNews said that he would not be saying Mass in public on Thursday.