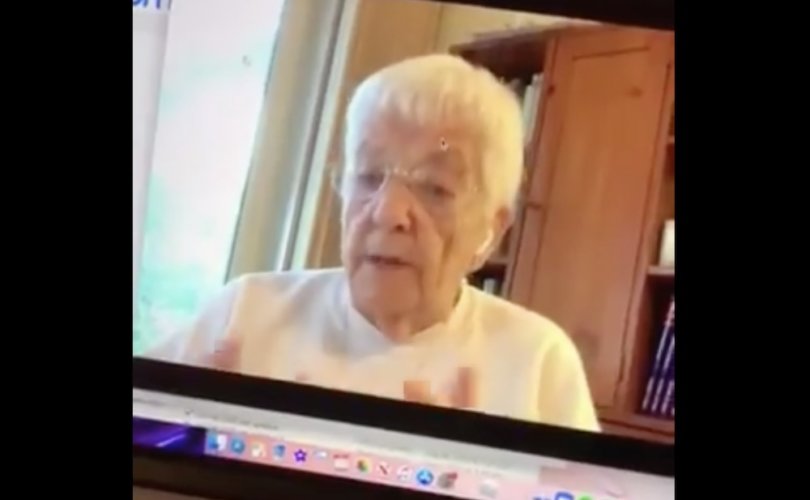 Titled “A Conversation with Jane Elliott Focusing on Power, Perception and Prejudice,” the September 23 online event billed Elliot as an “internationally known teacher, lecturer, diversity trainer and recipient of the National Mental Health Association Award for Excellence in Education,” whose “mission exposes prejudice and bigotry for what it is, an irrational class system based upon purely arbitrary factors.” It was presented by the SGA and the university’s Division of Diversity, Equity, and Inclusion (DEI).

Conservative personality CJ Pearson, who is currently an Alabama student, shared a clip of the event, in which Ellliott claimed Trump “has admitted to being racist, sexist, ageist, homophobic, and ethnocentrist” (none of which Trump has actually admitted), and said his supporters backed him anyway “because he is opposed to abortion.” He also said Elliott “compared America to Nazi Germany” and “the President to Hitler”:

Here’s one clip, with her most mild commentary of the night.

How such a one-sided presentation could be sponsored by a public university baffles me. pic.twitter.com/yptePzHMfI

In follow-up comments to Campus Reform, Pearson added that Elliott claimed Trump sleeps in bed with Hitler’s “speeches and manuscripts.” A screenshot of an Alabama student chat discussing the event paraphrases additional Elliott remarks as including “religious people need to get over abortion,” “evangelical Christians are terrible,” “George Washington was a terrible person,” “race doesn’t exist,” and the claim that the terms “gay” and “straight” are both “offensive.”

Here’s some @UofAlabama students talking about the mandatory hateful “diversity, equality and inclusion” training they had to do. The trainer, Jane Elliott, attacked: MAGA, Christians, George Washington, President Trump and more! We need to get this insanity OUT of our schools. pic.twitter.com/tSc5toKB9i

“Several leftist students in attendance, emboldened by the speaker, disparaged their conservative classmates as ‘ignorant’ for raising objections to Elliott’s rant,” the Alabama College Republicans and Alabama chapter of Young Americans for Freedom said in a joint statement. “It is ironic the University would endorse such views at the same time as they roll out their new OneUA initiative, the slogan for which is ‘hate doesn’t roll here.’”

While the event was technically voluntary, Pearson, YAF, and College Republicans also allege that it was functionally mandatory for “hundreds of students,” who had to attend as a qualification for various student organizations and programs.

The university responded to the controversy by insisting that “participation is voluntary” and that Elliott’s was just one of many “diverse opinions and perspectives” given a platform, none of which the university endorses. The university did not respond to several follow-up questions asking for examples of conservative perspectives it has hosted, addressing the charge that the event was mandatory for at least some students, or explaining why a recording of the full event has not been made available:

No they cannot. There was no conversation. Just a university deflecting.

Students have said that in order for an organization to be accredited with a diversity certification the campus org has to watch it. So, a sorority must make it mandatory to be accredited as a diverse org. That doesn’t sound voluntary. UofA knows what lack of accreditation means.

This summer, conservatives’ long-running complaints about incidents such as this one spurred the Trump administration to announce a review of the federal aid and tax-exempt status of public universities in light of whether those universities indoctrinate their students into adopting certain viewpoints.