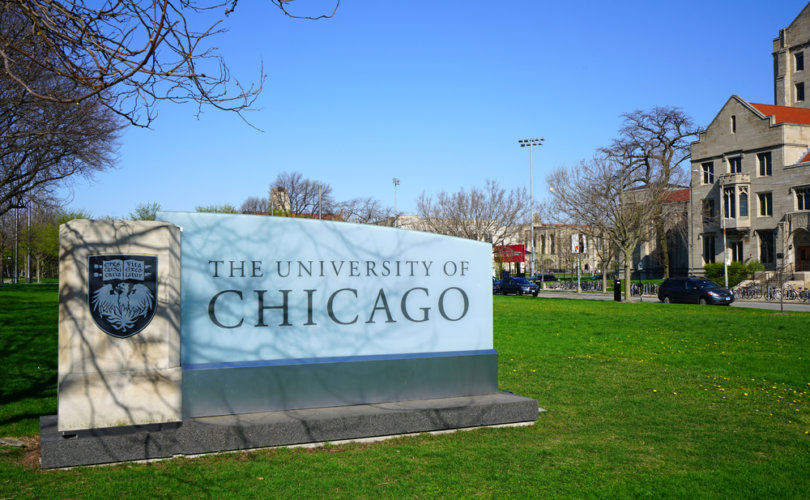 (LifeSiteNews) — Nonprofit advocacy group Health Freedom Defense Fund (HFDF) is pursuing legal action against the University of Chicago for its COVID jab mandate as well as its religious exemption form that requires applicants to agree to a list of controversial “facts” about COVID-19 and the experimental shots mandated to treat it.

HFDF president and founder Leslie Manookian, a former Wall Street executive and analyst who created a powerful documentary in 2011 examining the risks of vaccines and whose organization has led numerous lawsuits over the past year and a half challenging overreaching vaccine and mask mandates, said the framing of the religious exemption document amounts to “compelled speech.”

In an exclusive interview on Friday, Manookian told LifeSiteNews the University of Chicago violated Illinois law and its own university principles by mandating COVID-19 shots for all students, staff, and faculty, and forcing anyone applying for a religious exemption to first agree to a series of debatable assertions about the coronavirus and the abortion-tainted jabs on the market to treat it.

Requiring applicants to agree to a list of controversial statements about COVID-19, Manookian argued, is a form of “compelled speech” and is an element of the document the HFDF founder said she finds “repugnant.”

“The university is not providing an opportunity for students, teachers, and staff to make any edits or adjustments to the statement that they require you to sign,” Manookian said.

Applicants must agree, for instance, that “COVID-19 is a serious respiratory infection that has caused over 650,000 deaths in the United States and hospitalized over 2.9 million people in the U.S. since March 2020,” despite the CDC’s acknowledgement that many who died “of COVID-19” had serious and often multiple comorbidities.

In addition, applicants seeking a religious exemption at the University of Chicago must declare that “COVID-19 vaccines reduce the risk of people spreading the virus that causes COVID-19,” despite a recent statement by CDC director Rochelle Walensky that “what [the vaccines] can’t do anymore is stop transmission.”

Further, those requesting a religious exemption are required to sign their names to a statement that “COVID-19 vaccines are safe and effective at preventing COVID-19 disease, especially severe illness and death,” regardless of the fact that the long-term safety and efficacy of the shots has yet to be determined, and hundreds of thousands of reports of adverse reactions, including more than 16,000 deaths, have been reported to the Vaccine Adverse Event Reporting System (VAERS) since the shots were rolled out.

Manookian said another problem with the religious exemption document provided by the university is that it fails to provide applicants the option to object to the shots as a matter of personal conscience, regardless of affiliation in an organized religion.

“They are not providing an accommodation that is consistent with the Illinois Health Conscience Act, which doesn’t say that you have to be part of an organized religion or anything like that,” Manookian said. “It says ‘it’s against your conscience,’ that you have some kind of a moral objection. And there is no process, there is no avenue at the university to pursue that. So that’s a major problem. It’s clearly a violation of Illinois law.”

The Illinois Health Care Conscience Act (745 ILCS 70) cited by Manookian states that “[i]t is the public policy of the State of Illinois to respect and protect the right of conscience of all persons who refuse to obtain, receive or accept … health care services and medical care.”

According to Illinois law, it is also “unlawful for any person, public or private institution, or public official to discriminate against any person … because of such person’s conscientious refusal to receive, obtain, accept, perform, assist, counsel, suggest, recommend, refer or participate in any way in any particular form of health care services contrary to his or her conscience.”

Per the language of the legislation, “conscience” is defined as “a sincerely held set of moral convictions arising from belief in and relation to God, or which, though not so derived, arises from a place in the life of its possessor parallel to that filled by God among adherents to religious faiths.”

Manookian slammed University of Chicago administrators who act as “judge and jury” to determine the medical needs and religious beliefs of the university’s students and employees, saying the situation is “appalling” and “illegal.”

Manookian also pointed out that in addition to violating Illinois law, the wording of the religious exemption is “at odds with the University of Chicago’s ‘Chicago Principles’ which purport to defend and support free speech, academic freedom, freedom of thought.”

“If you’re compelling speech, you are contradicting your very own principles which they tout as the leading statement, and leading principles that should guide how universities conduct themselves,” Manookian said.

According to Manookian, the University of Chicago is not as eager as the HFDF to see the issue held up to legal challenge.

Manookian said the university “seems very keen to negotiate and try and find accommodations for these individuals, which I’m happy for, for them to be accommodated, but it doesn’t rectify the bigger picture, which is that their requirements are in violation of the Illinois statute.”

“The problem is these big groups just rely on the idea, comforted by the notion, that no one will sue. Well, you know what? Health Freedom Defense Fund is here, and we are suing,” she said.

LifeSiteNews reached out to the University of Chicago for comment but has yet to hear back.

Manookian told LifeSite her organization has up to 20 lawsuits currently underway, including one targeting Oregon Gov. Kate Brown for her jab mandate for healthcare workers, one against the city of Hailey, Idaho for its mask mandate, and another against the federal government for the president’s executive order requiring COVID-19 vaccination for federal employees.

“We have so many lawsuits on our plate it’s incredible because as you could imagine, people are desperately trying to do everything they can to save their lives and their jobs,” she said.

HFDF has seen success in its past legal actions against vaccine mandates, pushing Arizona to ban vaccine mandates and urging the Los Angeles Unified School District to toss its mandatory jab scheme.

Manookian said she feels energized to fight on behalf of others in defense of personal freedom and securing a better future.

“There is nothing more gratifying than helping people who don’t feel like they have any options, who feel helpless, and so that’s why I get up and do what I do every day,” she said.

Urging ordinary people to stand up against totalitarian overreach in whatever way is accessible to them, Manookian advised individuals and groups to hold the line and take back political power at the local level.

To those whose jobs are threatened if they do not get the jab, she said, “Do not fold. Don’t voluntarily resign, don’t separate, insist. Show up for work, and make them fire you if they’re going to do that.”

Exhorting those worried about government overreach to organize with like-minded neighbors, friends, and co-workers, the HFDF founder also encouraged families to pull their children out of public schools and for anyone with the interest and ability to “run for their school boards, run for city council, run for state senate or representative in their states, because you can make a difference. You really can.”

“And the thing is there’s never been a better time, at least in the last hundred years in our country, for average people to run for these positions and get elected, because there is a groundswell of support to get rid of the establishment people.”

“I think the biggest thing is: Protest. Protest. Stand up, show up, protest, protest,” she said.

“They are the few and we are the many. The only thing that is keeping them in power is the perception that they control us,” Manookian said.

Anyone interested in finding out more about Health Freedom Defense Fund should explore the organization’s webpage, follow the latest news of HFDF’s legal actions, and consider becoming a member.