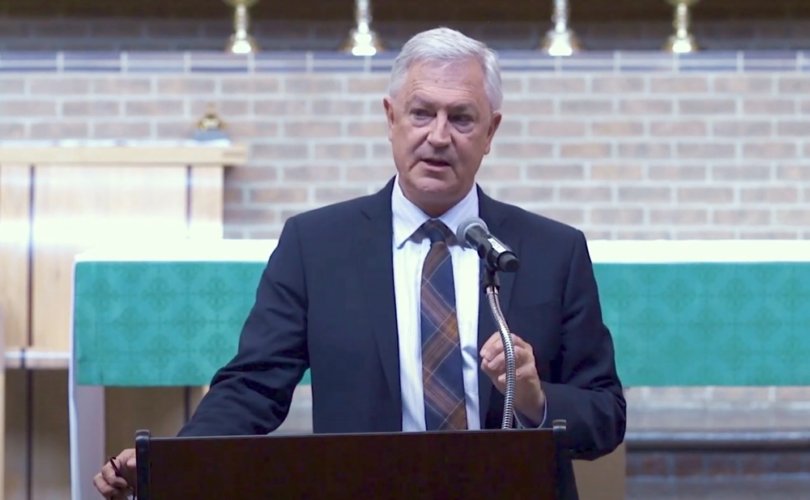 DALLAS, Texas, February 2, 2021 (LifeSiteNews) – The University of Dallas (UD), a private Catholic university in Texas, has come into the crosshairs of gender ideology activism after a disgruntled former student, a man who now identifies as a woman, took umbrage at an alleged “social media posting of hatred against trans persons by chair of the political philosophy department, Prof. David Upham.”

The alumnus, “Bethany” Beeler by name, a married man and father of three who claims that “Jesus is trans,” penned an open letter to the university administration, wherein he asserts that Upham’s “mischaracterization of trans persons flies in the face of established medical science, psychological science, and public consensus on the trans experience.”

Beeler shared a screenshot of a Facebook post by the professor which shows him criticizing the appointment of gender-confused Dr. “Rachel” (previously Richard) Levine as President Biden’s Assistant Secretary of Health. In the post, Upham makes straightforward observations about Levine, including that “Dr. Rachel Levine was born Richard Levine,” as well as pointing out that, being a biological male, Levine “was married and became the father of two human beings – whom God made in His image, male and female He created them.”

Upham clearly disapproves of Levine’s lifestyle change from husband and father to now “put on a somewhat convincing hormonal costume to go along with his conventionally feminine dress.”

Lamenting the onslaught of gender ideologues, Upham suggested that “Levine, in concert with the whole Biden administration, will try to use the powers of the federal government to FORCE others, by their words and their deeds, including medical expertise and know-how–to participate in these falsehoods, these hormonal and surgical harms–these wrongs.”

Continuing, Upham decried that “dissenters will have to say ‘SHE’ and ‘WOMAN’ or ‘HE’ and ‘MAN’ even when they know it’s false.”

Rather than attempt to prove Upham has made an error in what he “obviously believes, with religious conviction,” Beeler requested that the university administration “consider the judgement, character, and fitness of Prof. Upham,” essentially asking that he be removed from his post.

Beeler goes on to admit that Upham is “entitled to free speech,” but claims that he uses this liberty to promote “inflammatory descriptions of trans persons” and increase “prejudice against, [and] misconceptions about” gender-confused people.

Blind to the irony of his accusation, Beeler begins to criticize Upham for promulgating biological realities as truth, simply on account of them being his personal belief.

“One can believesomething a falsehood. Believing so doesn’t make it so.”

“Further, publicly insisting that it’s [transgenderism] a falsehood is so much screaming ‘Fire!’ in a crowded theatre, where there is none.”

Comparing Upham’s social media post to the events at the Capitol on January 6, Beeler says that “such behavior harms others, ‘forcing’ them to death or to suffer others’ attempted tyranny.”

In another clear attempt to have Upham fired, Beeler asked the unvierstiy administration: “[is] this the kind of behavior and person UD wants to place in front of children growing into young adults?”

The attempt to use gender ideology to strike at Upham was struck down by the university, whose president Thomas Hibbs, and provost Jonathan Sanford, released a joint letter in response to Beeler’s accusations, upholding religious and academic freedom: “The university is following its existing policies and protocols in this matter, and will not yield to internal or external demands to divert from them. We are not in the business of limiting the speech of our faculty and staff when they speak on personal social media sites.”

Seeking recourse to the Catholic identity of the university, the letter states that “If anyone is wondering whether we uphold Catholic teaching, we do. Our Catholic identity and fidelity to its teachings is at the core of our mission.”

Doubling down on the moral nature of the “transgender” issue, the university stated that it “embraces unreservedly the Church’s articulation of the moral law, including its articulation of those truths that deal with the embodied nature of the human person and human sexuality. If anyone is wondering whether we will protect the civil rights of all the members of our community, we can say unequivocally that we will. UD endeavors to respect the intrinsic dignity of each and every person in a spirit of truth and charity.”

Clare Venegas, Assistant Vice President for Marketing and Communications, added that “UD is fully and wholeheartedly ‘committed to the Catholic Church and its teaching.’ The university is committed to protecting the civil rights of all our students, faculty, staff and we are committed to a Catholic vision of difference and unity.”

The letter states that Upham is “a hardworking, kind, joyful man, who openly loves our school, our country, and our Lord. He courageously and respectfully discusses and defends what he loves in the classroom and in the public square.”

Defending Upham’s description of biological reality, the authors write that “Upham’s post was wholly consistent with the Church’s teaching that God created human beings in His image, that He created them male and female, that He created each person as an embodied soul.”

“We must clearly state that Dr. Upham was in no way inciting violence against anyone or ‘espousing hate out of fear of difference.’ He was merely warning that the incoming Biden administration poses a real threat to religious liberty,” the letter continues.

Turning attention to Beeler’s spurious claims, the letter asserts that a “reasonable person may disagree with Dr. Upham’s assessment, but only an unreasonable and intolerant person would see Dr. Upham’s assessment as grounds for dismissal and ostracism … Therefore, we ask that you give unqualified support to Dr. Upham and reaffirm the University of Dallas’s commitment to its mission statement.”

UD is not alone in facing opposition from “transgender” ideologues. LifeSiteNews is facing censorship from Twitter for making similar comments about Levine, now having had two accounts removed by the social media giant for expressing the biological truth about Levine.

In order to keep up to date with our daily news articles and comments, make sure to bookmark LifeSiteNews.com (or save as a “favorite”). We urge our readers to subscribe to our email list, but also warn that there is a chance our current email marketing platform may join the Big Tech purge of conservatives. Should this happen, we will change email marketing platforms as soon as we are able to do so. We have been anticipating a possible purge of pro-life voices by Big Tech companies and so are prepared for this day. We also urge our readers to make a habit of regularly going straight to LifeSite’s homepage. This will prevent any censorship from getting in the way of your reading the hard-hitting reporting we provide.