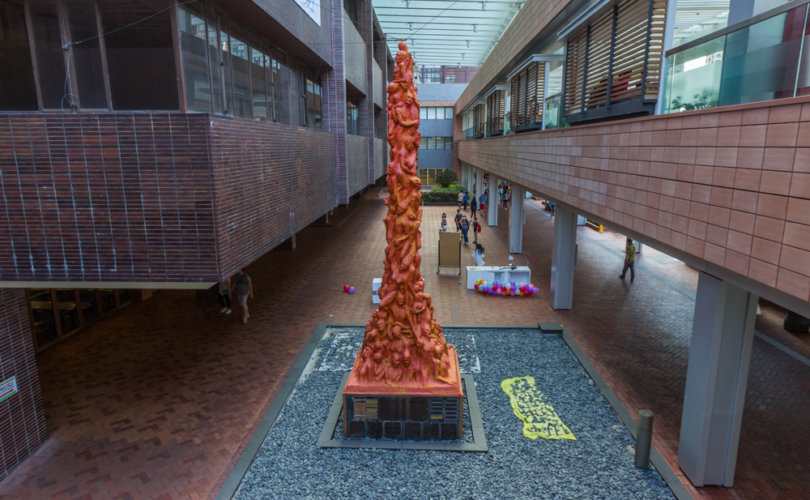 HONG KONG (LifeSiteNews) — A statue at the University of Hong Kong (HKU) representing the victims of the 1989 Tiananmen Square massacre in the Chinese capital of Beijing has been removed in the latest effort to quell opposition to Chinese authorities.

Overnight on Wednesday, a team of workers barricaded and dismantled the statue, depicting 50 contorted human bodies piled atop one another in commemoration of the bloody massacre in Beijing on June 4, 1989.

Although journalists were forbidden from accessing the site or filming during the statue’s removal, BBC footage shows the workmen breaking down the memorial, which is 26 feet tall, and transporting it off campus piece by piece, supposedly to HKU-owned storage, at around 7 a.m. Thursday.

Known as the Pillar of Shame, the statue stood on HKU’s campus for 24 years, but in October university administrators called for its removal, citing concerns with “the latest risk assessment and legal advice.”

The university released a statement Thursday, saying that the “decision on the aged statue was based on external legal advice and risk assessment for the best interest of the university.”

“Latest legal advice given to the university cautioned that the continued display of the statue would pose legal risks to the university based on the Crimes Ordinance enacted under the Hong Kong colonial government.”

“The university is also very concerned about the potential safety issues resulting from the fragile statue,” the statement added.

The statue’s creator, Danish sculptor Jens Galschiot, expressed his horror at the Pillar’s removal and calling the university’s decision “completely unreasonable and a self-immolation against private property in Hong Kong.”

Check out our latest email newsletter: https://t.co/f1vhnsokXs
I’m totally shocked that Hong Kong University is currently destroying the pillar of shame
It is completely unreasonable and a self-immolation against private property in Hong Kong

Speaking to the BBC, Dr. Ian Chong, Associate Professor at the National University of Singapore, said the statue “was one of the few remaining prominent, public memorials [of the] crackdown … and a reminder of Hong Kong’s freer past.”

The professor explained that its removal “takes away yet another public focal point for commemorating … the massacre … [and] appears to signal that the Hong Kong and Beijing governments will no longer tolerate public displays of remembrance of the events surrounding 4 June.”

The move comes amid a crackdown from Chinese authorities on political dissent in Hong Kong.

The city’s Victoria Park had played host to a candlelight vigil every year to commemorate the victims of the massacre, but the 2020 event was banned by Hong Kong authorities, apparently owing to COVID-related restrictions. Cities in China are not permitted to publicly memorialize the event.

According to Chinese authorities, around 200 people were killed at the pro-democracy protest in Tiananmen Square when the communist army opened fire on civilians over 30 years ago; however, other estimates put the death toll at between 3,000 and 10,000.

Thousands of pro-democracy activists defied the 2020 ban and gathered to remember the massacre and hold their annual vigil, organized by the now-defunct Hong Kong Alliance. Event organizer Albert Ho, former vice chairman of the Alliance, was sentenced to 10 months in prison for “incitement” and for attending the event.

A further 23 activists were charged for attending the event, eight of which received prison sentences between 6 and 10 months, and three receiving suspended sentences. A vigil was held again this year, despite another ban.

District Court Judge Amanda Woodcock said the demonstrators had “belittled” the coronavirus crisis by attending the vigil: “They wrongly and arrogantly believed their common purpose was more important than protecting the community or the public’s right to protection from a serious health risk.”

The arrests were made possible by the imposition of a new “national security law” from Beijing last year, giving the mainland powers more control over the former British colony and undermining the city’s autonomous rule.

Among those arrested was prominent Catholic media magnate Jimmy Lai, whose popular pro-democracy Apple Daily publication was closed by Chinese authorities owing to allegations of fraud against the outspoken supporter of Hong Kong’s freedom.

Unlike many attendees who were arrested for their presence at the vigil, Lai — alongside two others — contested the charges, arguing that he had simply turned up in a personal capacity and did not “incite” others to join.

Woodcock rejected Lai’s defense as “frankly nonsensical” and characterized his participation in the event as “an act of defiance and protest against the police.”