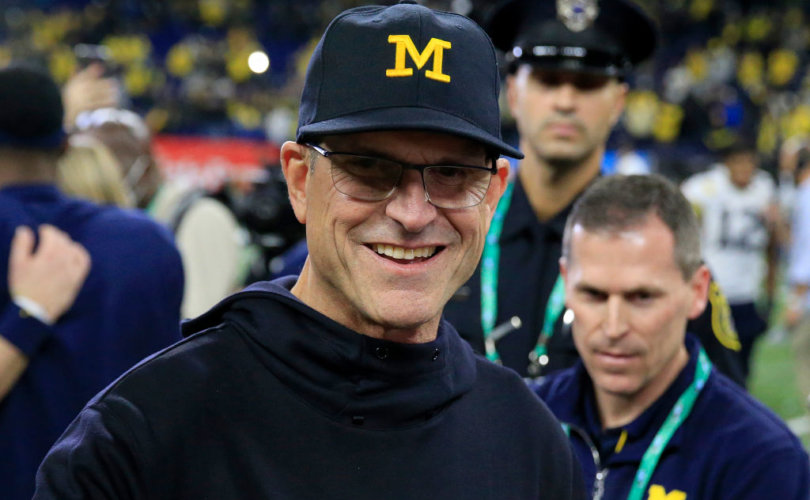 Head coach Jim Harbaugh of the Michigan Wolverines walks on the field after winning the Big Ten Football Championship game against the the Iowa Hawkeyes at Lucas Oil Stadium on December 04, 2021 in Indianapolis, Indiana.Justin Casterline/Getty Images

(LifeSiteNews) — The University of Michigan football coach and former NFL player Jim Harbaugh publicly condemned abortion as the “death of an unborn person” while speaking at a pro-life event.

The University of Michigan football coach was joined by his wife, Sarah, at the Plymouth Right to Life benefit dinner in Plymouth July 17. Harbaugh, unafraid of living his Catholic faith publicly, shared his opposition to abortion and his commitment to defend the unborn.

The coach addressed the difficulty of the pro-life mission to eliminate abortion as a “process [that] has been passionate and messy.” He said that he has “faith in the American people to ultimately develop the right policies and laws for all lives involved.”

“I recognize one’s personal thinking regarding morality of a particular action may differ from their thinking on whether government should make that action legal,” the coach continued. “There are many things one may hold to be immoral, but the government appropriately allows because of some greater good or personal or constitutional right.”

Harbaugh acknowledged the “legitimate rights of the mother and the rights of the unborn child.” He pointed out that choosing an abortion “results in the death of an unborn person.”

“In God’s plan, each unborn human truly has a future filled with potential, talent, dreams and love,” he said. “I have living proof in my family, my children, and the many thousands that I’ve coached that the unborn are amazing gifts from God to make this world a better place.”

The ‘right choice is to…let the unborn be born’

Corresponding to the event’s theme, “We Were Made to be Courageous,” Harbaugh added, “to me, the right choice is to have the courage to let the unborn be born.”

Following the keynote speakers, Harbaugh’s wife Sarah shared a testimony on how her parents influenced the pro-life views of her own family.

“From an early age, my mom and dad would go to a Planned Parenthood and pray,” she said. “Both my parents talked about protecting the unborn. I have friends, even family, who have considered abortion or had an abortion, and I know they are not better for it.”

Coach Harbaugh has spoken out against abortion in the past. In 2020, he condemned the killing of unborn babies on a podcast interview with the National Review, as previously reported by LifeSiteNews.

Harbaugh has also shared the importance of his faith with the public, including a visit to the Vatican in 2017, where he said that his priorities in life were “faith, then family, then football.”

Coach Harbaugh is not alone in the American football scene in opposing abortion. According to the March for Life, several pro-life advocates are connected to the National Football League (NFL) and have publicly spoken in defense of the unborn. Tim Tebow is also well known for his Christian stance on abortion and declaring the importance of the pro-life mission.

Following the overturning of Roe v. Wade, Harbaugh pointed out that tensions surrounding the abortion issue are higher than before. He referenced the current campaign aiming to prevent the enactment of the Reproductive Freedom for All proposal in the state of Michigan. According to Detroit Catholic, this amendment would overthrow current legislation against tax-funded and partial-birth abortions as well as the requirement for minors to have parental consent to pursue an abortion.

Earlier this week, LifeSiteNews reported that Michigan’s pro-abortion governor plans to veto more than $20 million in funding from the state’s budget bill. This includes eliminating financial support of items which would promote adoption as an alternative to abortion.

As the issue of abortion access continues to be fought in his state, Harbaugh remains firm in his faith and resolution to defend the unborn.

“During halftime of a game, talking with the players,” he said. “I say they are here because they have chosen to be here. If someone believes in what they stand for, they are choosing to stand for that position. And what kind of a person are you if you don’t fight tooth and nail for what you stand for?”