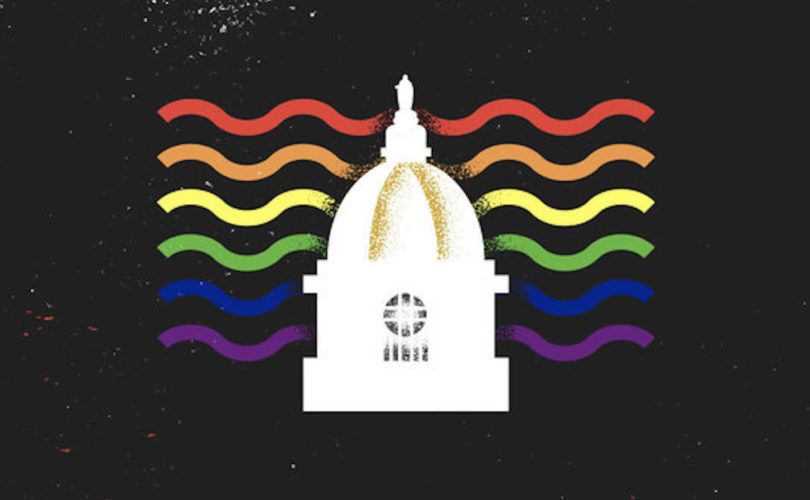 SOUTH BEND, Indiana, June 8, 2021 (LifeSiteNews) – The Catholic University of Notre Dame has officially dubbed June to be “Pride Month,” essentially joining with every other “woke” corporation and institution in the United States and the very pro-LGBT Biden administration.

A statement issued by the university’s office of “Diversity and Inclusion” proclaims that “Pride Month is observed each June in the United States in commemoration of the Stonewall Uprising,” and that it is also “a time to recognize the contributions of LGBTQ+ Americans and raise awareness about efforts for equal justice and equal opportunity for the LGBTQ+ community.”

The university issued the statement despite the fact that it stands in direct opposition to the Church’s very clear teaching on homosexuality and the imutable truth about the complementarity of man and woman.

The uprising at the Stonewall Inn in June 1969 sparked a liberation movement — a call to action that continues to inspire us to live up to our Nation’s promise of equality, liberty, and justice for all. Pride is a time to recall the trials the Lesbian, Gay, Bisexual, Transgender, and Queer (LGBTQ+) community has endured and to rejoice in the triumphs of trailblazing individuals who have bravely fought — and continue to fight — for full equality. Pride is both a jubilant communal celebration of visibility and a personal celebration of self-worth and dignity. This Pride Month, we recognize the valuable contributions of LGBTQ+ individuals across America, and we reaffirm our commitment to standing in solidarity with LGBTQ+ Americans in their ongoing struggle against discrimination and injustice.

The university then encouraged its students to explore what it means to be an ally in the effort to achieve LGBT equality by tapping into the resources of the Human Rights Campaign (HRC), the LGBT Lobbying powerhouse in Washington, D.C.

“You shame the name of Our Lady,” declared Austin Ruse, Catholic author and head of C-Fam in a tweet.

You shame the name of Our Lady. https://t.co/DtNTvBgY93

“Hey Notre Dame – as a Catholic institution, the only thing June should be for you is for the Sacred Heart of Jesus,” scolded a Twitter user named Amanda.

Hey ⁦@NotreDame⁩ -as a Catholic institution, the only thing June should be for you is for the Sacred Heart of Jesus. https://t.co/Zp7vFquSnX

“It’s so shameful to see what ND has become,” tweeted another.

It’s so shameful to see what ND has become.

The university has long been on a trajectory leading away from authentic Catholic teaching and toward the normalization of homosexuality, transgenderism, and abortion.

Last year, Notre Dame announced the hiring of Pete Buttigieg – a pro-abortion homosexual who is “married” to another man – as a 2020-2021 faculty fellow at the Notre Dame Institute for Advanced Study (NDIAS). Buttigieg is the former South Bend mayor who ran as a Democratic presidential candidate.

While vying for the Democratic party’s presidential nomination, Buttigieg inferred that God made him gay, supported gay rights over religious liberty, and very publicly encouraged a 9-year-old boy to “come out” as gay.

Yet Buttigieg’s antipathy toward bedrock Catholic teachings did not prevent him from being hired by the Catholic university. Notre Dame said it was “thrilled” to have him.

“Though he possesses an impressive background and experience, I do believe Buttigieg’s  hiring continues a pattern I have seen at Notre Dame over the last decade or so and that is the slow erosion of maintaining a strong Catholic identity and supporting Catholic values,” Mark Nishan, class of 1976, told LifeSiteNews at the time.

“I understand the desire of the university to welcome diversity and different thinkers to challenge thought and creativity,” said Nishan, “but it is disappointing that they embrace those who openly oppose Catholic teachings and values to teach within it.”

“So much that parades in political life today is threadbare theater. Notre Dame is at its best when it reaches back to ancient precepts and applies them with clarity to new situations,” observed 1974 Notre Dame graduate Chuck Donovan, president of the Charlotte Lozier Institute.