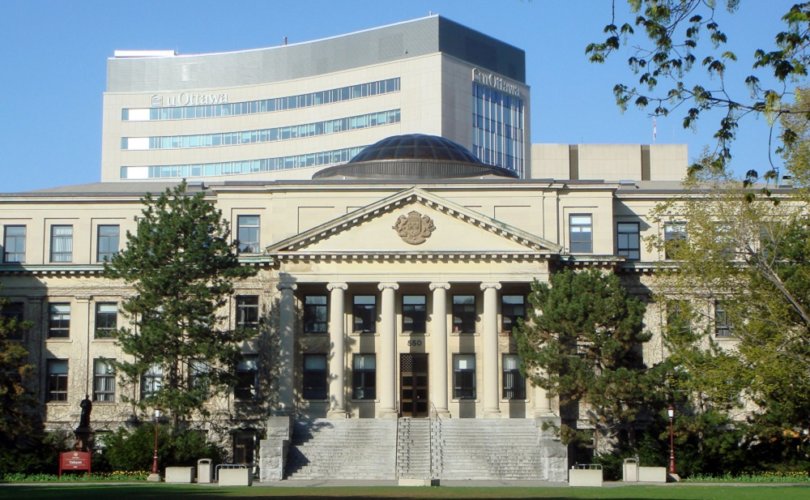 The University of Ottawa's Tabaret Hall.

Jan. 29, 2020 update: The University of Ottawa Students for Life will officially challenge the decision to strip it of official club status with an appeal to be heard on February 16. Read full statement at end of this report.

OTTAWA, Ontario, January 21, 2020 (LifeSiteNews) — A campus pro-life group vows to fight a recent decision that has stripped it of official club status.

“So effectively as of right now, the club has lost status,” says pro-life champion Ruth Shaw, executive director for the National Campus Life Network, to LifeSiteNews.

The pro-life organization serves in an official capacity to speak on behalf of the shut out pro-life club, The University of Ottawa Students for Life (UOSFL). The National Campus Life Network is a group that works to train Canadian University students to communicate effectively about the realities of abortion with those on campus.

Removing club status means that the pro-life group can no longer access funding or resources through the student union.

The UOSFL will be appealing the recent decision to ban the group and will launch a counter to the ruling at a future board meeting of the newly created University of Ottawa Student Union (UOSU). The UOSU is a recent formation after the original student union was shut down due to financial mismanagement involving members of its executive.

“They are going to appeal the decision, and we are looking at strategies to employ within the next couple of weeks with them,” Shaw added. “More than anything our aim is to have students keep active. We are not going anywhere, club status does not really mean much, we can operate.”

The ban on the UOSFL was driven in part by a 500-signature petition against them, started by fifth-year University of Ottawa biology student Bridget Dueck.  She was quoted as saying in a Charlatan article, “We are not focusing on the abortion debate because there is no debate — it is a human right.” She added, “We are focusing on the students dictating where the resources they pay for go, making them feel safe on campus and free to access their education without any fear of discomfort or trauma caused by this group.”

The UOSFL has been in a long battle to regain official club status, having been mostly in a shutout state since October of 2017. That was when the now defunct Student Federation of the University of Ottawa (SFUO) stripped the club of status. This happened because “their mandate promotes human rights for all human beings” as reported in this 2017 LifeSiteNews article. The club had been operating for ten years as a registered campus club, fostering respectful dialogue and hosting many different events focussing on human rights issues, especially abortion. Without official club status, the UOSFL does not receive any funding or support from the UOSU.

The club briefly regained status for a short time in October of 2019 as reported on their Facebook page here. They still needed, however, the final approval of the UOSU, which also recently announced that it was taking a pro-abortion position, changing its club code of conduct to block any groups from obtaining funding who are against abortion.

The UOSU held a General Assembly at the start of December, in which students were given a choice to vote on the club status of UOSFL. This meeting failed to meet quorum, meaning the final decision to remove UOSFL’s status came down to a December 20 UOSU Student Life Committee meeting. It was at this meeting where the petition of 500 signatures was brought forward from pro-abortion advocates. The committee then voted to strip the UOSFL of its status.

Shaw feels that the entire process was not fair, saying to LifeSiteNews, “They effectively rewrote the rules to work in their favour.”

Shaw also notes that UOSFL is still able to be on campus and has a presence there. This is something she feels is in large part due to a recent free speech policy mandate from the Ontario Provincial Government.

“Effectively, we can keep our club and do exactly what we were doing, thanks to the Doug Ford Policy,” says Shaw. She noted that she is grateful for this free speech policy, which she says has enabled the UOFSL to operate, despite not being officially supported by the UOSU.

The “Doug Ford Policy” is a 2019 mandate from the Ontario Ministry of Training, Colleges and Universities, which requires all publicly assisted colleges and universities to have a free speech policy. It came about as an election campaign promise from premier of Ontario Doug Ford.

“Colleges and universities should be places where students exchange different ideas and opinions in open and respectful debate,” said Ford in the official press release regarding the mandate. “Our government made a commitment to the people of Ontario to protect free speech on campuses. Promise made, promise kept.”

On January 19th, the University of Ottawa Students' Union (UOSU) held a Board Meeting, where they intended to host the appeals process for the University of Ottawa Students for Life (UOSFL). On January 6th, 2020, the UOSFL club received an e-mail outlining that our club status had been revoked and that reasons for this decision would be provided at this Board Meeting. However, not only were reasons not provided during the January 19th Board Meeting, but the UOSFL was expected to present our appeal on January 19th, without having received any reasons for the decision and without our questions about the appeals process having been answered.

On this basis, citing issues of procedural fairness, I challenged the UOSU and asserted that they should provide the UOSFL club with reasons for the Student Life Committee's decision to revoke our club status and that we could only be expected to respond after that point. They agreed with my argument, and so the appeals process has been delayed until February 16th at noon, which is the next UOSU Board Meeting.

Therefore, for these reasons, as the UOSFL's representative throughout this process, I will be challenging both the substantive decision and the procedural fairness of the decision. The UOSU is evidently unaware of the severity of the decision that has been made, and I do not feel that they are taking the process seriously. The Student Life Committee's decision has had a profound impact on our club and our members already, including causing significant emotional and mental anguish, and that is a serious concern that the Student Life Committee has not recognized up to this point. Moreover, the entire appeals process was created after the dispute with our club emerged, making it highly questionable whether the process is itself fair. Finally, the fact that the UOSU took a formally “pro-choice” position prior to the enactment of the regulations and appeal process that is now being wielded against our club is evidence of further procedural unfairness. All of these factors combine to create a reasonable apprehension of institutional and systemic bias against our club. All of these points will be discussed at the February 16th meeting, when I will be bringing a formal appeal on behalf of the UOSFL club.