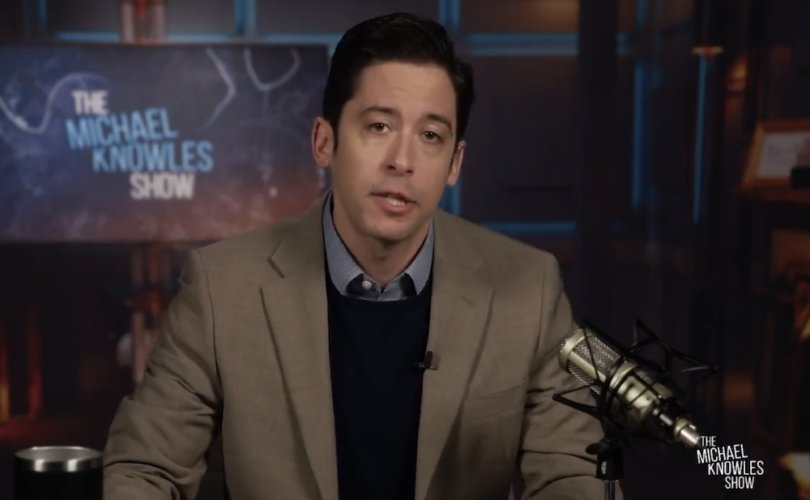 Knowles’ speech, free to the public but in a venue limited to 300 seats, was slated to tackle the ideology of gender fluidity and make the case that men and women are objectively different, which was enough to elicit plans to protest from Washburn leftists who claim this “discriminatory narrative” constitutes “transphobia” and “directly infringes on the safety of Washburn’s transgender and non-binary students and faculty”:

if you didn’t already know, a speaker by the name of Michael Knowles will be speaking here at Washburn this Thursday about “ending transgenderism madness”
i along with a large sum of the student body have organized a protest pic.twitter.com/LU2c2DScdu

i want all students at Washburn to remember that you MATTER and this discriminatory narrative will NEVER and SHOULD never be accepted at Washburn
if you feel unsafe or inadequately protected this week or thursday, PLEASE do not hesitate to reach outhttps://t.co/smd61E1vBG pic.twitter.com/ESuHMiMBqK

On Tuesday evening, Farley wrote an email to the student body endorsing that reaction, blasting WCR for “invit[ing] a speaker to campus who has a history of inciting fear and distrust. While I am strongly in the support of first amendment rights, I am disappointed when those rights are used to make others feel unwelcome and even unsafe in our community.”

Farley went on to note that the speech happens to take place on “International Trans Visibility Day,” declare Washburn’s “solidarity with Trans people around the world,” vow to work to make the campus “an inclusive place where all feel they are protected, affirmed, and valued,” and “encourage[d the student body] to celebrate the day with messages of compassion and support.”

The College Fix reported that it asked Washburn for examples of Knowles spreading “fear and distrust” and “hate and misinformation,” and if Farley had ever emailed the student body about past speakers, but was told only that the email “was an internal message and we are not going to comment further on it.”

Washburn College Republican chairwoman Claudia Fury told The Sentinel that booking Knowles in the first place was a “six-month ordeal” due to Washburn first taking “weeks to respond to emails,” then in October 2021 claiming that WCR would need $30,000 to pay for private security for the event (a sum that was eventually reduced to $780), then continuing to “slow roll” approvals, then the Student Government Association initially trying to refuse funding for the event.

Knowles addressed the controversy on his podcast and via Twitter, accusing Farley of hypocrisy in his professions of “inclusion” and offering to let him share the stage with him:

President Farley of course did not cite any evidence for his defamatory claims because none exists. But in the spirit of open dialogue and the free exchange of ideas, I would like to invite President Farley to share the stage with me tomorrow night. (2/x)

Or he can cower in his administrative office, defame me for speaking common sense, and attempt to hide the fact that he personally invited me to speak in the first place. The choice is his. I look forward to a respectful debate if he has the courage of his convictions! (/fin)

Who knew I was such a menace to society?

Washburn spokesperson Patrick Early told the Topeka Capital-Journal that Farley’s signing of the event contract is a procedural formality that does not imply his personal endorsement.

Young America’s Foundation, which is also sponsoring the speech, will be streaming it live tonight on its YouTube channel from 7 to 9 p.m. CDT.