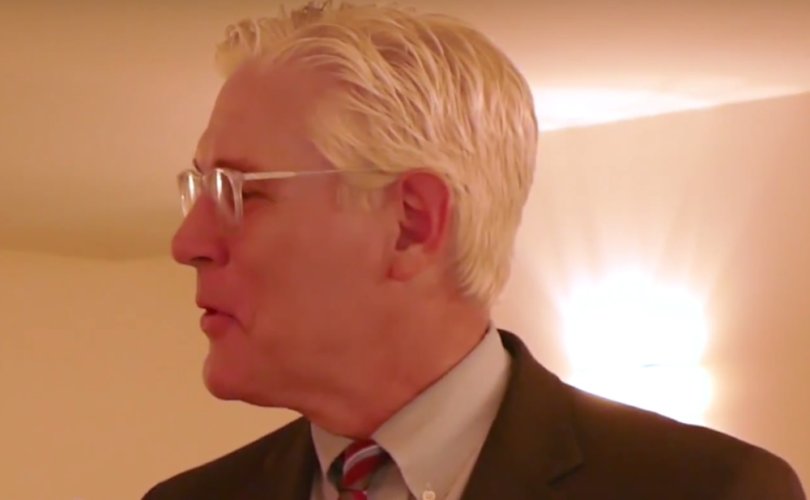 September 30, 2016 (LifeSiteNews) — The Obama administration’s imposition of transgender ideology on schools is anti-woman and “would be laughable if it weren’t so sad,” Oklahoma Wesleyan University President Dr. Everett Piper told LifeSiteNews in an exclusive video interview.

“Title IX is a law that was established in 1972 to give women —women! — equal access to the athletic field and to facilities and programs,” Piper explained. Yet this is the same law that President Obama has used to threaten schools with the loss of federal funding if they do not let students access the restrooms, showers, and intimate facilities of the opposite sex.

“Now how in the world is it possible for anybody to be pro-woman if they now, under the Title IX ‘Dear Colleague’ letter, which tells us to deny the biological fact of the female, and give her rights — the biological female’s right to the athletic field and to her shower and to her toilet and to her facilities — give those rights to someone who fancies himself or fabricates female identity out of thin air?” Piper asked.

Denying biological reality “insults the female,” Piper said. “It dumbs down the definition of the human being to nothing but a fabrication and a fantasy rather than a biological fact. Now why would I want to do that and why would anybody who’s pro-woman — why would a classical feminist ever [want to] buy that particular line of thinking?”

Piper blasted political correctness and the prevailing mindset that universities should reward students for having opinions rather than pursuing the truth.

“You pursue truth because it’s an objective reality, it’s out there,” he said. “Go get it, embrace it, learn more of it — that’s the objective of going to college in the first place.”

“If you’re a nurse, for example, and you’re going to administer medication to me on the basis of your opinion, I’d like you to stay away from me because you’re dangerous,” Piper said. “All the despots of history” had opinions, “but it didn’t end very well. Jesus told us, ‘You shall know the truth, and the truth shall set you free.’ And there’s a reason that that motto was emblazoned across libraries across the world at one time: because it’s the only context for true liberty and true liberalism.”

Piper said that under no circumstances would he allow men and women to share dorm rooms at OWU. It wouldn’t make sense to try to force that on OWU because students “come to our institution, [and] enroll voluntarily” because they believe in the four pillars of its mission statement: the primacy of Christ, the priority of Scripture, the pursuit of truth, and the practice of wisdom.

“You have freedom of association … You sign a contract saying that you will behave a given way because that’s the type of community environment you want,” Piper said. “Why would anybody presuppose to tell me to start dishonoring that and start violating that in the way I deal with students in terms of the ideas that I teach, the policies that we promote, or the expectations that we have for our students or faculty?”

Last year, Piper penned a piece titled This is not a daycare. It’s a university! It quickly went viral for skewering political correctness and the notion that students should be protected from ideas that might upset them.

His newest book, Not a Day Care: Why a Coddled Nation is a Crippled Nation, will be released in April 2017.

OWU was one of nearly 40 institutions that, along with the Little Sisters of the Poor, took the Obama administration to the Supreme Court for trying to force them to formally cooperate in the provision of contraception and abortion-inducing drugs.