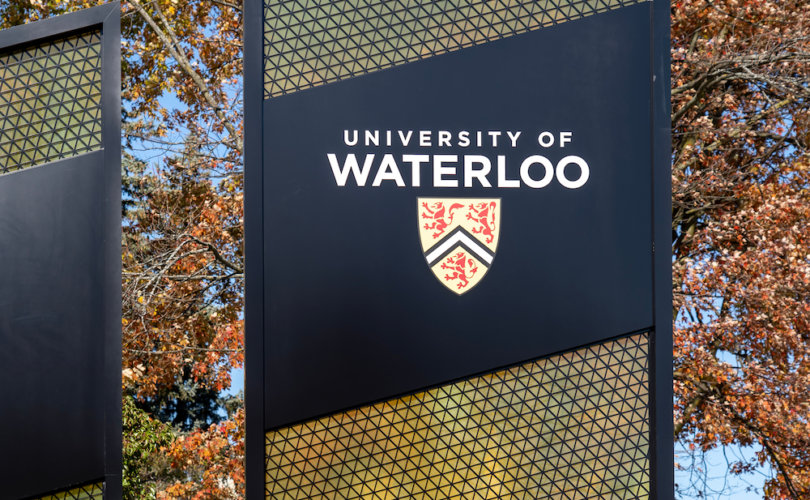 University of Waterloo (UW) pylon sign is seen at the main campus entrance in Waterloo, On, Canada on October 17, 2020. UW is a Canadian public university.JHVEPhoto/Shutterstock

WATERLOO, Ontario (LifeSiteNews) — Three University of Waterloo (UW) professors asked the school’s board to investigate whether the president’s membership on the federal COVID task force factored into his strong enforcement of a campus vaccine mandate for staff, students, and faculty.

“We are extremely concerned that the decisions made by UW President Vivek Goel with regard to the University’s mandatory vaccination policy – the so-called ‘Requirement’ – may have been significantly influenced by his membership in the federal COVID-19 Immunity Task Force, thereby representing a conflict of interest (COI) and therefore a violation of Policy 69 (Conflict of Interest),” the three professors wrote in an email addressed to the school’s Board of Governors and the school’s Senate in late March.

“UW Policy 69 requires proactive disclosure of conflicts and potential conflicts, but Professor [Vivek] Goel failed to do this,” the group stated.

As explained in the group’s letter obtained by LifeSiteNews, the COVID-19 Immunity Task Force, of which Goel is a member, strongly supports “immunity passports,” “mandatory vaccination” against COVID-19, and even considers it “urgent” to “vaccinate the world” against the highly survivable virus.

The group stated that after searching through UW archives, there was only one mention in a public document that stated Goel’s association with the task force and does not include a statement from Goel himself explaining his “association with the Task Force could affect, or could be perceived to affect, the decisions he would make as President of UW,” as required by the “conflict of interest” statute.

In light of the potential conflict of interest, the group posed a series of questions they demand be part of an investigation by the UW Board of Governors and the UW Senate, which include an inquiry into why Goel adopted “the strictest form of a vaccination policy,” why he declared “in advance that accommodation requests would be ‘rare,’” and why at least one professor, medical microbiologist Dr. Michael Palmer, was fired after public health recommended the removal of vaccine mandates.

Goel also told the Toronto Star that while UW has now temporarily halted their vaccination mandate, the school will continue to take disciplinary action against those who refused to comply with the policy, despite many other post-secondary institutions in the province allowing suspended workers to return to campus upon the pausing of COVID-era directives.

Dr. Edward Vrscay, an applied mathematics professor who has been at UW for over 35 years and whose position is threatened because of non-compliance to UW’s COVID mandate, told LifeSiteNews that UW’s handling of COVID indicates that the school seems more concerned with “control” and punishing “dissenters” than with the health of the student population.

One example Vrscay gave to LifeSiteNews to prove this point comes from a March 23 article in the Waterloo Region Record in which Goel is quoted as saying that the “success of the mandate is shown in the high level of compliance the school has had,” rather than the success being reflected in a reduction in the number of positive COVID cases since the introduction of the mandate.

In fact, another UW professor, John Turri, analyzed UW’s own COVID case data highlighting that “over an eight-month period” the vaccine mandate is only “associated” with “1 fewer positive covid-19 test on campus every two months,” a number Turri says “is not meaningfully different than zero.”

In response to this analysis, Goel did not deny what Turri presented, but rather stated that “success becomes hard to measure because we don’t know if we didn’t have high levels of vaccination whether there would be more outbreaks happening in our community,” and whatever leads to staff and students being able to return to campus without disruption is a “success for me.”

Turri responded to Goel’s statement on SubStack saying, “First, shockingly, Goel implies that compliance itself was the goal (high compliance shows that the policy succeeded). This contradicts the requirement’s stated objective [which was to “reduce the spread of COVID-19″] which impugns the honesty and integrity of UW’s communication on the topic,” adding that this indicates the policy is “arbitrary and authoritarian.”

In concluding statements to LifeSiteNews, Vrscay intimated that the adoption of the vaccine mandate and the strong push for compliance is but one symptom of a larger cultural shift occurring at universities throughout Canada.

“This is a spiritual war,” Vrscay stated. “This is not just about vaccination … This is all happening for a reason. This is happening to show how corrupt, how corrupt every man-made institution is.”

“In a sense, it is even deeper than just an institution where you are not free to say what you want … it filters down into everything, into a ‘censorship’ if you will.”

Vrscay’s statements echo those of the now-fired Palmer, who told LifeSiteNews last year that since the “get-go” the university has “refused to engage” with him on the topic of COVID vaccination, despite the fact that he is a board-certified medical microbiologist who has taught pharmacology at the university level.

Asked why he thinks that UW, and academic institutions more broadly, have been so stringent with vaccine mandates and other so-called COVID-19 measures, Palmer asserted that the “leadership” is “stacked with globalist stooges, just like all other important institutions of society, and are subservient to the [so-called COVID-19] agenda.”

The group of academics have created a website detailing and documenting all their research and the timeline of the UW vaccine mandate “imbroglio.”