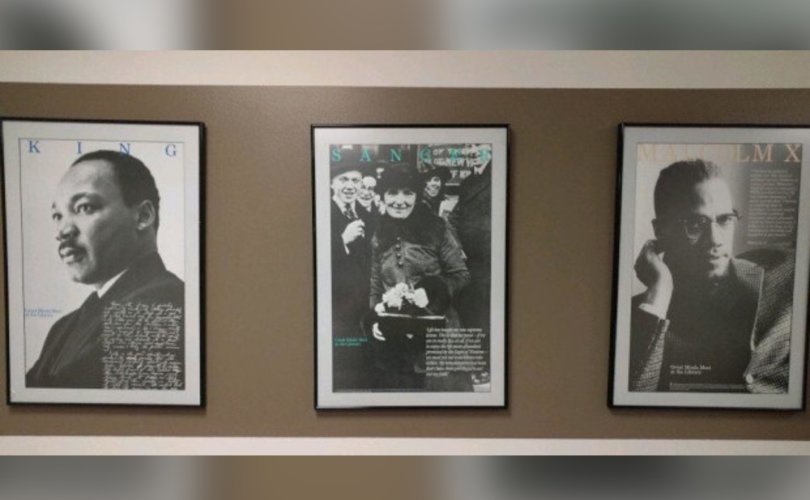 Mizzou Students for Life (MSFL) formally requested Ellis Library remove Sanger’s portrait – which was next to civil rights champion Rev. Martin Luther King, Jr.’s – because of her well-documented racism and desire to reduce the black population.

In this letter, MSFL said it was passing around a petition, alerting the national media, and contacting King’s pro-life activist niece, Dr. Alveda King.

Originally, library officials said they were going to remove the poster at their “next review.” But they ended up taking the picture down immediately.

“We applaud the library for removing the poster and no longer celebrating Margaret Sanger and her eugenicist views,” MSFL President Kristen Wood said. “The university should never be celebrating and promoting someone who publicly opposed people in poverty and racial minorities…having children, and someone who supported putting people on birth control to prevent them from having children.”

The MSFL petition cited a few of Sanger’s blatantly racist statements, arguing those necessitated taking the portrait down. The students used it as an opportunity to educate their peers about Planned Parenthood and Sanger’s shady pasts.

“If the picture comes down then it opens a conversation about her racist, eugenic views,” said Ceci Haberdash of MSFL. “People deserve to know the truth.”

Taking a similar stand in 2015 were a group of black pastors who wrote Smithsonian Museum officials, demanding they take down a bust of Sanger in their “Struggle for Justice” exhibit at the National Portrait Gallery.

Through contraception, Sanger sought to weed out “defectives” in a vision to “create a race of thoroughbreds.” The Planned Parenthood founder believed that large families should kill their infants.

“The most merciful thing that the large family does to one of its infant members is to kill it,” she wrote.

A member of the American Eugenics Society, Sanger championed forced sterilization and proposed a law requiring state approval for any pregnancies: “No woman shall have the legal right to bear a child, and no man shall have the right to become a father, without a permit for parenthood.”

Sanger taught that contraception must not “indiscriminately” distributed, but directed toward certain groups she saw as inferior. She wanted the government to put birth control in the drinking water of urban areas with large minority groups.

In 1921, she said that birth control “means the release and cultivation of the better racial elements in our society, and the gradual suppression, elimination and eventual extirpation of defective stocks — those human weeds which threaten the blooming of the finest flowers of American civilization.”

In a eugenics campaign called “The Negro Project,” Sanger enlisted black ministers to help her convince minority women to stop reproducing. She once even spoke to the women of the Ku Klux Klan.

Sanger filled her organization with others of like mind, including Nazi sympathizers.

In addition to African-Americans, Sanger targeted those with disabilities and those in prison. Even among healthy citizens, she opposed what she called the “overbreeding among the working class.”

One Planned Parenthood group admits its own “racist roots.”

Despite claiming that “Black Lives Matter,” Planned Parenthood has joined with the ACLU to fight in federal appeals court for the right to commit abortions based on the baby’s race, sex, or possible disability.

Planned Parenthood receives nearly half a billion dollars from the U.S. government annually.

MSFL thanked the Ellis library for taking Sanger’s portrait down. The students also warned library managers that if they put the Sanger portrait back, they will resume their protests.