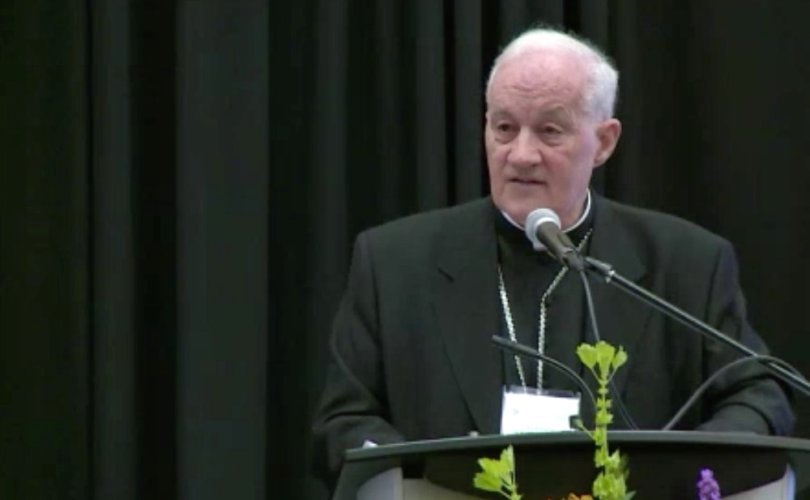 Cardinal Ouellet at CCCB meeting in 2017.

POZNAN, Poland, September 25, 2018 (LifeSiteNews) – A high ranking Vatican cardinal has called a recent allegation that Pope Francis covered-up for and promoted a known abuser an “unjust attack” against the Pope.

“We are facing a crisis in the life of the Church, a crisis at the level of leadership of bishops, and also to a certain extent of rebellion,” the Canadian Cardinal and Archbishop Emeritus of Quebec said.

“This is a serious matter that has to be dealt with in a very serious way, not only in a political way,” he continued. “So, I think for example when there is a direct attack against the Holy Father, I think it is a very bad example and a very serious offense.”

“And I do not think it is responding positively because it is also an unjust attack recently.”

Since the Extraordinary Synod on the Family in 2014, Pope Francis has faced an intensifying barrage of questions and concerns from prelates, clerics, and laypeople worried about the way he is leading the Church. However, there is a new urgency to the pleas for answers since a former papal nuncio to the United States, Archbishop Carlo Maria Viganò, released a statement this August 25 alleging that Pope Francis, knowing the prelate’s reputation for sexual misconduct, restored now-ex Cardinal Theodore McCarrick to a position of influence. The Archbishop called on the Pope to resign. Viganò stated in his testimony's single footnote that he had documents to back up his claims.

Since August, other allegations that Pope Francis has intervened to protect abusers–as an Archbishop in Argentina and more recently as pope–have come to the attention of the English-speaking world.

Ouellet told reporters that he had told participants at the week’s Council of the Catholic European Bishops’ Conference meeting that they must “express solidarity with the Holy Father.”

“I am pleased to recognize that there is something being prepared on the part of this body, of the bishops’ conference, to express to the Holy Father this solidarity in this current context,” he said.

When asked by Vatican Radio what he would say to the faithful suffering feelings of betrayal, sorrow, and anger, the cardinal stressed the importance of solidarity with their pastors who are “under attack.”

“The faithful see that their pastors need prayers and need to be supported and encouraged,” he said. In recent times, they have been strongly under attack.”

While stressing the importance of solidarity in the Church, Ouellet conceded that it is “also necessary for people to express their anger, their dissatisfaction, their freedom in complete freedom.” He also stated that “pastors” must listen and invite abuse victims to come forward.

“I believe that pastors must not only listen but also invite the people who have suffered to manifest themselves, because if these wounds are not expressed, they will destroy people’s lives. We have seen the suffering and the consequences of abuse in recent years and that the damage is enormous and is lasting in life. There is a work of reparation, of reconciliation that must be carried out,” he said.

Answering Zenit’s question about the most effective way to combat clerical sexual abuse, the cardinal suggested that “more women” should participate in the formation of priests.

“I would say that we would need participation of more women in formation of priests for teaching, for discernment, and for discernment of candidates, for the balance of effectiveness,” he said. “I think we need more reflection here.”

While not entirely minimalizing the upheaval in the Church following new revelations of clerical sex abuse and coverup, Ouellet insinuated that it is currently a preoccupation of English-speaking countries.

“The Pope has summoned to Rome all the presidents of the bishops’ conferences, to address in a very broad perspective, this problem,” he said. “It seems to be at the moment, an American, or Anglo problem, but it is a human problem. It is universal.”

Once considered a possible successor to Pope Benedict XVI, Cardinal Ouellet has been the prefect of the Congregation for Bishops and president of the Pontifical Commission for Latin America since June 2010. In 2009, he encouraged bishops to show solidarity with Benedict XVI against opposition both within and outside the Church. More recently, Cardinal Ouellet expressed a fidelity to Catholic doctrine concerning marriage and the Eucharist before the Extraordinary Synod for the Family began. However, his belief that couples in “irregular” unions must not receive Holy Eucharist seems to have become more nuanced since the promulgation of Amoris Laetitia, which permits this reception to such people under certain circumstances.