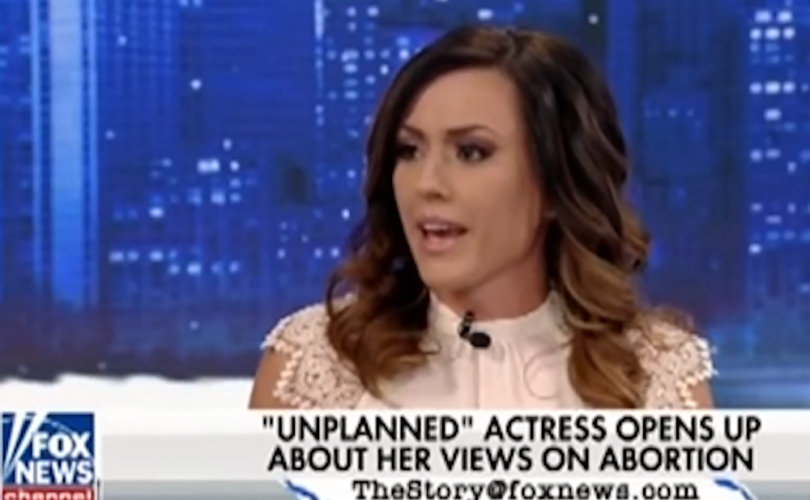 January 23, 2019 (LifeSiteNews) — The lead actress in the forthcoming Unplanned movie shared her personal experience of learning she nearly became another aborted child when her mother was pregnant with her as a young woman.

Actress Ashley Bratcher knew her mother had an abortion with a sibling before becoming pregnant with her at age 19. But it wasn’t until four days into filming Unplanned that Bratcher’s mother told her she came close to aborting her.

Bratcher’s mother shared what she had kept secret for years after the actress told her about the movie she was filming, the story of Planned Parenthood facility manager turned pro-life activist Abby Johnson.

Bratcher shared the emotional account on a recent broadcast of Fox News Channel’s “The Story with Martha MacCallum.”

Bratcher had already been on the Unplanned set for four days when her mother called to catch up with her and talk about what she was filming.

“And my mom had shared with me that when she was younger she’d had an abortion,” Bratcher said, “and that when she became pregnant with me at 19, she knew she could never have another one. That was all I ever knew of the story.”

On the day her mother called, she had no idea what Bratcher was filming, and so when she went to tell her about Johnson’s story, she wanted to be gentle and respectful of her mother’s feelings because she didn’t want her to feel judged.

“And in explaining Abby’s story and testimony, my mother just broke down completely,” said Bratcher, getting emotional herself. “And she said, ‘I need to tell you something that I never told you before,’ and I said, ‘OK, and she was just weeping into the phone.’”

“And she said, ‘You don’t know this, but I was actually on the table, pregnant, and a nurse came in to examine me, and that was when I got up and decided to keep you.”

Bratcher explained for MacCallum how this thought will follow her in life and why.

“And I get emotional every time I tell this story,” she said, “because I don’t know that it’s ever going to go away when you look at your life, and you think that everything you’ve experienced almost never happened, just within a few seconds, a few minutes.”

Bratcher said it was a really courageous thing not only for her mom to have her but to tell her. Women in similar situations and their the stories should be celebrated, she said.

“She chose to struggle and empower herself to have me,” said Bratcher. “And to tell me, it took a lot of grace to tell me this.”

The film is really about education and creating awareness, said Bratcher, “because so many people have no idea what’s really happening.”

Earlier in the interview, Bratcher explained how Johnson’s experience stepping in to assist with an abortion and seeing the truth of it the first time was the tipping point of Johnson’s pro-life conversion, something of which most people are unaware.

“The general public is completely blind to what the procedure entails,” said Bratcher. “And seeing that, she knew for the first time that there really was life inside the womb.”

She’d never taken the pro-life cause on as her platform, Bratcher said, and had “shades of gray” in her opinion.

“But after hearing Abby’s testimony and listening to a firsthand account of what was going on behind the scenes and understanding everything that was happening,” she said, “it just really opened my eyes to know that this isn’t OK for me in any situation.”

The younger generation, while divided on issues, is still asking more questions and wants to be educated, continued Bratcher.

“Anybody who approaches this,” MacCallum concluded, “any thinking person needs to just understand what the facts are in order to make their own decisions on all of this.”

The Unplanned movie is scheduled to for release March 29.