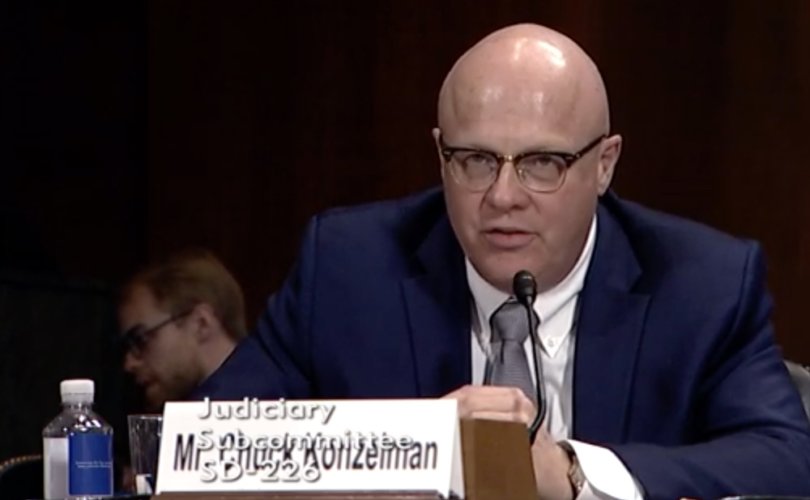 WASHINGTON, D.C., April 10, 2019 (LifeSiteNews) – The writer and director of a new film about pro-life leader Abby Johnson’s conversion story appeared before the Senate Judiciary Committee’s Subcommittee on the Constitution Wednesday to detail the suppression efforts Unplanned has endured from both the entertainment industry and dominant online platforms.

Unplanned’s official Twitter account found itself suspended recently and reinstated after public outcry, though even afterward found its followers removed and other users temporarily unable to follow it, which a company spokesman claimed was simply a matter of a restored account taking roughly a day to “stabilize.”

“This account was caught in our automated systems used to detect ban evasion. Ban evasion technology is an important tool used to reduce the number of repeat offenders on our platform,” Monje claimed in his prepared remarks. “Specifically, the person who created the movie’s account was previously suspended for breaking our rules. We reinstated @UnplannedMovie as soon as it was brought to our attention that the account was not being used for similar violative activity, and the hashtag #UnplannedMovie became a trending topic on Twitter.”

Konzelman’s prepared remarks presented a different picture of the incident, noting that the account was “owned by the film’s single purpose marketing entity” and that the justification “has not – to the best of my knowledge – been made clear, beyond being ‘accidental.’”

“Later on the same day, Twitter apparently deleted the vast majority of those listed as ‘followers’ for our account,” he continued, “reducing the number from something on the order of 200,000 to less than 200. A thousand-to-one reduction in our listed followers […] Again, this was all during the all-important first weekend of our release.

“Begging the question, Why does this only seem to happen to conservatives?” Konzelman asked. “Or as the satirical website The Babylon Bee put it: “Meanwhile, Planned Parenthood, an organization that actually kills babies every single day, still had an active Twitter account in good standing.”

The director also noted that the Motion Picture Association of American (MPAA) gave Unplanned an “R” rating for “some disturbing/bloody images,” which “precluded us from using the single most effective form of motion picture advertising –paid placement of our theatrical trailer” before non-“R” films. He noted that the filmmakers sought but were denied an exception to the trailer prohibition.

“We also looked to advertise on cable television. But with the exception of Fox News and CBN, we were systematically denied access to the outlets where we sought to advertise – among which were Lifetime, UP TV, Hallmark, HGTV, USA Network, Food Network, The Travel Channel, DIY and the Cooking Channel,” he continued, adding that the A&E-owned Lifetime network claimed to reject it on the grounds of the “sensitive nature of the film,” despite having “previously promoted an interview with Scarlett Johansson in which she promoted Planned Parenthood.

“We consider these blanket refusals highly unusual and highly discriminatory, and have formally petitioned the FCC to look further into the matter,” Konzelman said.

Turning to Google (who did not have a representative present Wednesday), Konzelman detailed how Unplanned was barred entirely from placing banner ads with the Google Display Network, on the grounds that the internet giant purports to refuse any abortion-related ads.

“Just one problem: We weren’t doing abortion-related ads. We were marketing a movie,” he said. “It’s important to note that this prohibition was solidly in place for the entire leadup to our theatrical release […] Because that all-important opening weekend’s results determine the course of the film’s theatrical run … and even how much will make in ancillary markets and overseas.”

After Unplanned’s release, he said, “Google came up with yet another restriction, concerning event ticket sales … one which our film’s marketers had never come across or even heard of in multiple similar campaigns.”

He noted that Facebook was the only major platform where Unplanned didn’t face significant hurdles, and argued that the subsequent 18 million trailer views attested to the importance of “unrestricted access” to social media.

Konzelman went on to note that several pro-abortion films are currently in development as well, and asked, “Is there any member of this committee who would like to go on record as saying they honestly expect either of those films to have trouble in buying advertising –on Google, or otherwise? I think not –because they won’t.”

“If they are allowed to apply their own broadly drawn ‘guidelines’ to dismiss one side of controversial issues – the side they don’t agree with — and do so with impunity? Then they will do so,” Konzelman warned. “In a digital age, exclusion from the digital arena isn’t just discriminatory – it’s the most insidiously effective form of censorship imaginable.”

Unplanned tells the real-life story of Johnson, a former Planned Parenthood abortion facility director who converted to the pro-life cause in 2009. It stars Ashley Bratcher as Johnson and features an appearance by reformed ex-abortionist Dr. Anthony Levatino as the abortionist who commits the “procedure that changes Abby’s life.”

During her own opening remarks, ranking subcommittee Democrat Sen. Mazie Hirono dismissed concerns of conservative censorship, suggesting the world’s leading tech giants couldn’t have become among the “biggest and most profitable companies on the planet” by “turning away a portion of their potential customers.”

In fact, Facebook, Twitter, and Google have come under fire for numerous instances of banning conservative content that fully complied with each company’s stated rules, and Planned Parenthood’s past sale of aborted baby parts is undisputed (they simply claim the money they received didn’t exceed cost reimbursement, despite Planned Parenthood officials suggesting otherwise on video).