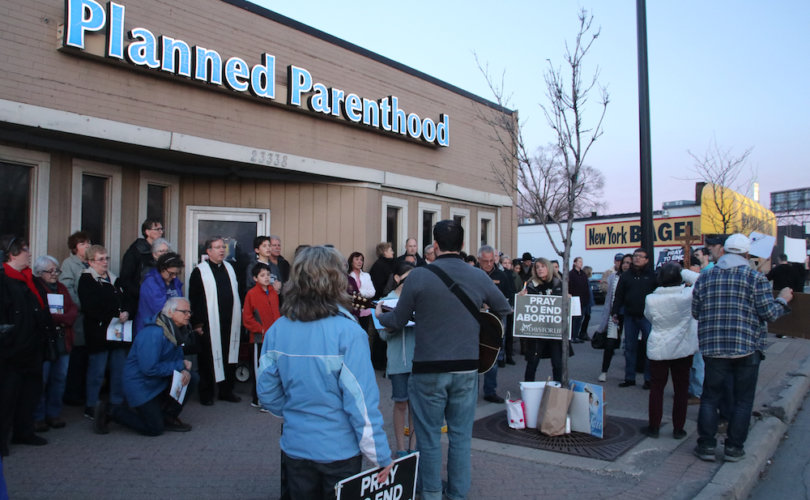 April 16, 2019 (LifeSiteNews) — At one of the well-attended Michigan vigils held in conjunction with the National Pro-Life Candlelight Vigil this past weekend, a priest gave a sermon that reminded pro-lifers when they act to deter abortion they are following Christ’s call to serve the least among us.

Msgr. Robert McClory, pastor of the National Shrine of the Little Flower Basilica in Royal Oak and former chancellor of the Archdiocese of Detroit, called the act of abortion wicked, despicable and heinous at the vigil in Ferndale, Michigan, where he spoke, and called for pro-life advocates to plead for mercy of those involved with the procedure.

He also reclaimed the area around the facility with holy water at the conclusion of his sermon.

Vigils inspired the movie Unplanned, the story of former Planned Parenthood manager turned pro-life activist Abby Johnson, had an exceptional turnout Saturday, with more than 10,000 people estimated to have turned out at some 166 demonstrations at Planned Parenthood facilities in 40 states.

A number of vigils had clergy participating, two with bishops, Michael Sheridan of Colorado Springs, Colorado and Chad Zielinski of Fairbanks, Alaska.

McClory reminded those in attendance in Ferndale of the humanity of the unborn.

The vigils were organized by the Protest Planned Parenthood (#ProtestPP) coalition composed of the Pro-Life Action League, Created Equal, and Citizens for a Pro-Life Society, together with more than 75 local, state, and national pro-life organizations.

In Michigan, Citizens for a Pro-Life Society reported nearly 300 in Livonia, 234 in Kalamazoo, 184 in Traverse City, and 75 in Ferndale.

McClory read the Gospel from Matthew 25:31-46, regarding the sheep and the goats, and Christ questioning those at the Last Judgment what they did for the least of His children.

McClory noted how inclusivity has become a popular term in our culture, and that we are called to be more and more inclusive.

Jesus in the parable of the Last Judgment describes the ultimate inclusivity, he pointed out, that Christ’s love and embrace extend to those who are hungry, thirsty, those who are strangers, naked, imprisoned and ill.

“Our culture, which espouses theoretically such a value, so sadly fails to extend the inclusive embrace of love and protection to the most vulnerable among us,” stated the monsignor.

“Jesus tells us that what we do to the least of these ones we do to Him,” he added. “And so as we help women to be able to bring their children to term and to be able to recognize the beauty of the gift of life, we’re helping Jesus.”

“As we dissuade those who would seek to undertake a wicked and despicable and heinous act of abortion, we are serving Christ in others,” McClory.

He called attention to the irony that environmental laws make it illegal to harm or kill certain animals or even take their eggs, yet human beings are not afforded the same protection.

“How it is in the environmental area we say that even an egg is of course protected,” he queried.

“Whether that egg is viable or not doesn’t matter,” said McClory, “that egg is worthy of protection, included in the protection of the law … and yet, for the littlest ones those fertilized eggs from the moment of conception – society looks the other way.”

In his preaching, he broached the Last Four Things – Death, Judgment, Heaven and Hell.

“Today Jesus reminds us that there will come a time, when we pass from this life, when we will then experience judgment,” McClory said, “and what awaits us are either the glories of heaven, or the fires of hell.”

We have a merciful Jesus who wants none of us to go down the path of destruction, he told the Ferndale vigil participants, but we should not kid ourselves that that moment of judgment won’t come.