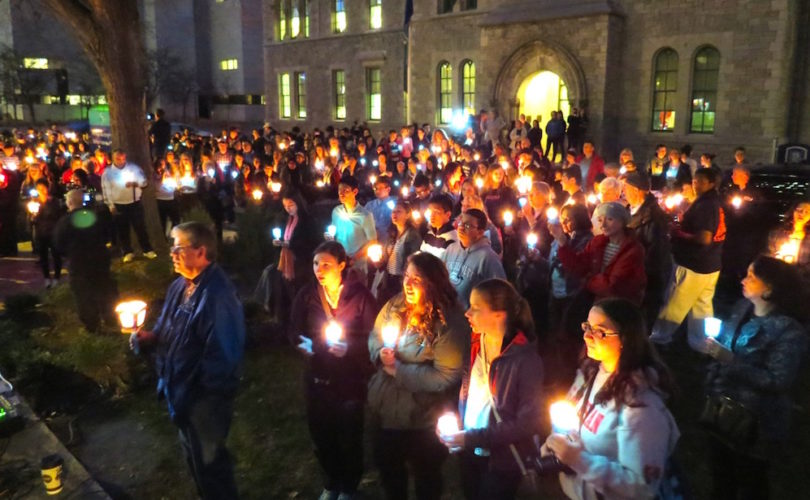 Pro-life citizens gather for a candlelight vigil the night before the 2013 March for Life.John-Henry Westen / LifeSiteNews

April 11, 2019 (LifeSiteNews) — On April 13, candlelight vigils will be held outside the Planned Parenthood facilities all across the United States, with thousands of pro-life advocates expected to participate. The vigils were inspired by the chilling look inside the abortion industry in the recently released movie Unplanned, which tells the story of Abby Johnson. Johnson left her position as the manager of a Planned Parenthood facility in Bryan, Texas, after participating in an ultrasound-guided abortion, and became a nationally known pro-life advocate. Planned Parenthood is the nation's largest abortion provider, and performs more than 36% of all abortions in the United States every year.

“Unplanned presents a heartbreaking story of what abortion does to its unborn victims, the women who make that choice, and those who are involved in providing abortions,” said Eric Scheidler, executive director of the Pro-Life Action League and one of the national organizers of the Nationwide Candlelight Vigil. “The pro-life community nationwide is responding to the pain and suffering of abortion by turning to prayer.”

More than 140 candlelight vigils have been scheduled in 37 states (see list of locations here). The vigils will feature pro-life advocates offering hymns and prayers for an end to abortion, often with reflections by local clergy. In many locations, women will share their stories of how abortion led to years of pain and suffering, encouraging other women not to make the same tragic choice.

“Planned Parenthood claims to put women's needs first,” remarked Monica Miller, a co-director of this nationwide event, and executive director of Citizens for a Pro-Life Society. “But Unplanned tells a very different story — a story confirmed by their own annual reports. While abortions continue to rise at Planned Parenthood, every year they're seeing fewer patients and performing fewer other services. More and more, Planned Parenthood is really all about abortion.”

“Unplanned has become a call to action for the pro-life movement,” noted event co-director Mark Harrington, executive director of Created Equal. “Thousands have been inspired by this movie to get actively involved in the pro-life movement for the first time. Saturday's Nationwide Candlelight Vigil will be the critical first step for many of these new pro-life activists — including a new group of first-time leaders.”

The Nationwide Pro-Life Candlelight Vigil is being coordinated by #ProtestPP, a joint project of the Pro-Life Action League, Created Equal, and Citizens for a Pro-Life Society, who are joined by a coalition of more than 75 local, state and national pro-life groups. Hundreds of #DefundPP rallies organized by #ProtestPP in 2017 and 2018 were instrumental in prompting the Trump administration to impose new rules barring abortion providers like Planned Parenthood from receiving Title X funds from the federal government.