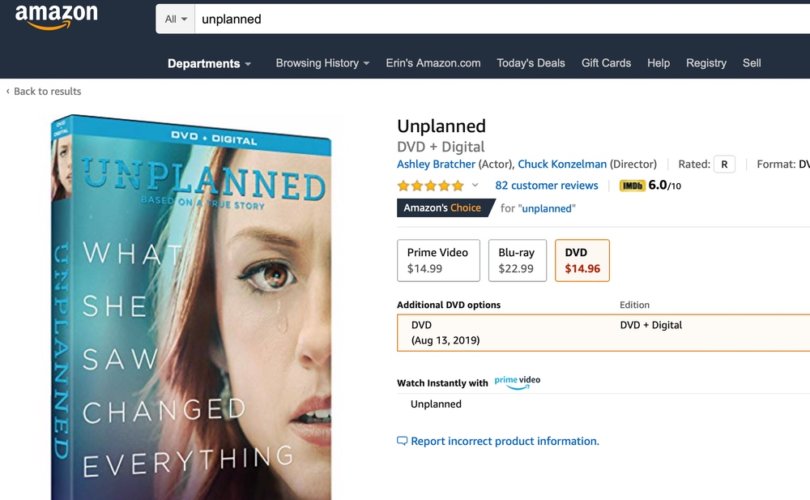 LOS ANGELES, August 14, 2019 (LifeSiteNews) – “Unplanned,” a movie which recounts the life of a woman who left behind a job as a Planned Parenthood abortion manager, has become not only a box office success but it became the number one DVD in Amazon sales on its first day of sales this week.

Capturing the true story of Abby Johnson, “Unplanned” relates how she quit a job as director of an abortion facility in Texas in 2009 after experiencing a conversion and renouncing abortion. Starring actress Ashley Bratcher in the role of Johnson, “Unplanned” has grossed more than $18 million in cinemas during the course of 19 weeks, according to Box Office Mojo. Receipts for showings in foreign markets were not available at Box Office Mojo. However, with a production budget of $6 million, domestic receipts for the film showed success. The website indicated that it has shown at over 1,500 cinemas in the United States alone.

In the days before its DVD release, Johnson — who is now an outspoken pro-life advocate and mother — said in a Facebook video: “I am so excited to tell you guys that “Unplanned”, today and maybe for a while, is the Number 1 movie on Amazon. So, not even under a specific category, it’s the Number 1 movie overall.”

The DVD of “Unplanned” can be purchased at Walmart and Amazon, as well as other retailers. Autographed copies are available on Johnson’s online store at www.abortionworker.com.” “Unplanned” was officially released in video format on Tuesday, having seen approximately 235,000 copies already sold prior to the release. It is also available on Blu-ray Disc, and can be streamed on-demand on Amazon Prime Video.

“Unplanned” is being shown in foreign markets, including Canada, United Kingdom and the Philippines. Johnson said in her Facebook video that it is widely available in Latin America, and will be shown broadly in Pakistan.

The movie has met with resistance in some markets. For example, Canadian distributors were initially reluctant to show it in cinemas. At least two Canadian cinemas canceled screenings of the film in July due to death threats. Other obstacles to the film included an “R” rating from the Motion Picture Association of America, which some critics presumed was intended to limit the number of viewers.

Guess what the #1 best selling DVD on Amazon is right now?!@UnplannedMovie pic.twitter.com/vD4wIj7h18

In an interview with Daily Signal, Cary Solomon — who co-directed the film with Chuck Konzelman — credited a mystical experience for the success of the film. She said that when the producers of the film were initially “very worried, very scared” about making the film, “we had a Holy Spirit moment: The Spirit dropped on us and basically said, ‘Do not be afraid. This is for my glory.’” Despite all doubters, Solomon asserted that this was precisely what happened.