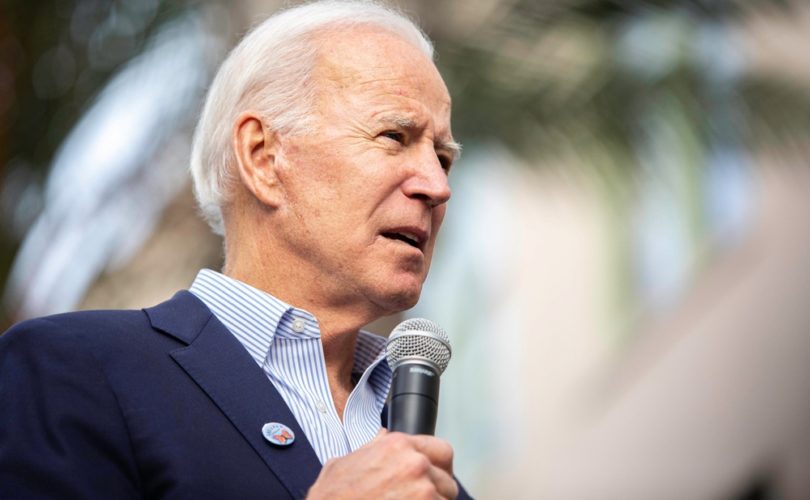 WASHINGTON, D.C. (LifeSiteNews) — A bevy of Trump-appointed officials serving on federal advisory boards were told to resign or be fired last Wednesday in an “unprecedented” move that many are calling a “purge.”

Officials who had been appointed by former President Donald Trump to serve on advisory boards and commissions were handed a letter from the White House personnel director dated September 8 asking them to resign.

If they failed to do so, the letter stipulated that their position would be terminated.

As reported by the Daily Wire, the board members given a pink slip by the Biden administration ran the gamut from appointees to boards for military academies “to highly credentialed experts at obscure entities where politics are unlikely to be an issue.”

According to the New York Post, President Joe Biden’s purge has drawn “stiff pushback” because the board members had been granted fixed appointments with terms that were “supposed to last three years.”

“I think this complete purge shows that the administration is hellbent on the woke mob controlling or having input into military education,” an unnamed board member told the Post. “Otherwise, why do it?”

Of those dropped from their positions Wednesday, 18 had served on military academy boards, with six each from the Naval, Air Force, and Army (West Point) academies told to resign or be fired.

“This is why this is such a big deal: historically it has never been done,” one board member fired by the Biden administration told the Post. “‘Unprecedented’ is a word you could use here.”

As noted by the Daily Wire, board members to bureaucratic advisory panels have usually been “appointed to fixed terms and are not removed by new presidents.”

While the move is indeed unprecedented in U.S. presidential history, it does not technically violate the law.

Prior to the move to purge Trump-affiliated officials from their board appointments, the Biden administration had previously stopped the boards from meeting at all.

“In some cases, the Biden administration initially seemingly preferred that no work get done at all rather than work with one or more Trump appointees in the room,” the Daily Wire reported.

“Boards which simply did not meet while Trump appointees were still on them include the National Board for Education Sciences (NBES), which did not meet during a year when there was a massive demand for guidance about what science says about how coronavirus should impact schooling,” the report read.

Board members selected for termination included former counselor to President Trump Kellyanne Conway and former White House press secretary Sean Spicer. Many others were relieved from duty whose appointments do not appear to have been political, including former national security advisor HR McMaster.

McMaster had pushed back against Trump on foreign policy issues during his tenure and until last week held an advisory board position with West Point.

The former national security advisor was shoved out of his role just ahead of an award ceremony on the 20th anniversary of the September 11 terrorist attacks, a ceremony in which he is slated to receive West Point’s distinguished graduate award.

Even the Daily Beast called the abrupt firing of McMaster “petty, crass, and unnecessary.”

Many of those told to resign have publicly shared snapshots of the letters requesting their resignation, announcing their refusal to comply with the White House’s directive to give up their appointments.

The resignation request letters were penned by White House Personnel Director Cathy Russell and addressed to the Trump-appointed board members.

“On behalf of President Biden, I am writing to request your resignation,” the letters read.

“Please submit your resignation to me by the close of business today. Should we not receive your resignation, your position with the Board will be terminated effective 6:00 pm tonight. Thank you.”

After receiving a letter advising her to resign, Kellyanne Conway wrote her own letter addressed to President Joe Biden, stating: “I’m not resigning, but you should.”

President Biden, I'm not resigning, but you should. pic.twitter.com/HuRYM4bLYP

“Three former Directors of Presidential personnel inform me that this request is a break from presidential norms. It certainly seems petty and political, if not personal,” Conway wrote.

Russ Vought, a former Trump administration budget director and founder of the Center for Renewing America, who received the Pentagon’s distinguished public service award for his work building up the size of the U.S. Navy’s fleet, was handed his notice Wednesday. Signalling he would refuse to resign, Vought tweeted out, “No. It’s a three year term.”

“Prof. John Yoo of @UCBerkeley and I aren’t woke enough for Biden’s tastes,” tweeted Johns Hopkins University applied economic professor Steve Hanke, who was also booted from his board position this week along with University of California, Berkeley law professor John Yoo.

“We are two of the fixed-term Trump appointees who were terminated by Biden in his unprecedented purge of federal boards,” Hanke said.

Prof. John Yoo of @UCBerkeley and I aren't woke enough for Biden's tastes. We are two of the fixed-term Trump appointees who were terminated by Biden in his unprecedented purge of federal boards. See @benshapiro's @realDailyWire reportage: https://t.co/jTsMZPIOJg

Former Navy Academy Board member Sean Spicer, who now works with conservative news outlet Newsmax, said in a Thursday Twitter thread that he has “served under 5 presidents of both parties.”

“When wearing the uniform you serve the Commander in Chief, under an oath to the constitution not [a] political party,” he added.

The former Trump press secretary announced that he plans to join a lawsuit against the Biden administration for his ouster.

“This admin has questioned the qualifications of people who have served our country & set a dangerous precedent by politicizing these institutions,” Spicer said.

It remains to be seen how many more Trump-appointees pulled from their positions by the Biden administration plan to join onto the suit, or whether other suits will be filed.