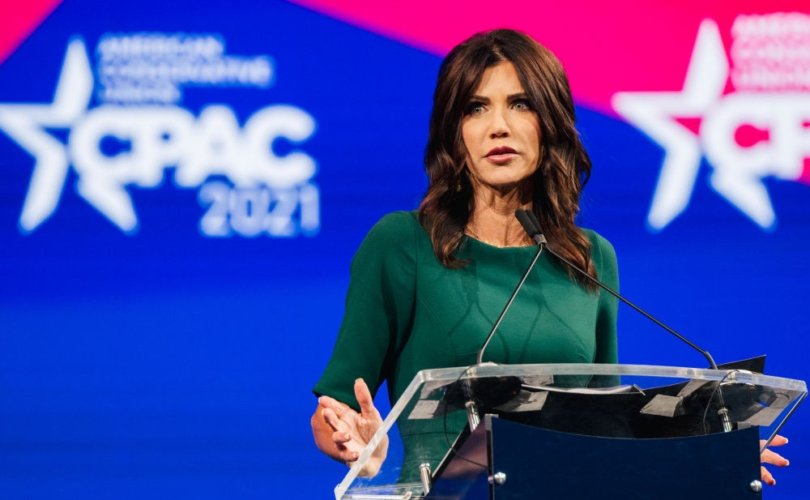 PIERRE, South Dakota (LifeSiteNews) — Republican legislators in South Dakota have refused to consider a bill proposed by Gov. Kristi Noem which would have banned almost all abortions if a fetal heartbeat could be detected, a move the governor has called “unprecedented in the very worst way.”

Gov. Noem had introduced the legislation last month on the same day the 49th annual March for Life took place in Washington, D.C., along with a bill draft which would prohibit the distribution of abortion drugs through the mail. Early signs pointed to the future success of the bills, which together would ban nearly all abortions in the Mount Rushmore State.

However, in a surprise move last week, a Republican-led committee of the state’s House of Representatives refused to grant a hearing for the bill which would ban abortions after a fetal heartbeat can be detected (or about six weeks gestation), effectively killing the proposed legislation.

The decision to reject the pro-life bill came after reports had suggested South Dakota’s legislative body was set to approve the measure.

According to CBS, Gov. Noem had “previewed the legislation for weeks, and it has received an enthusiastic reception from fellow Republicans who dominate the Legislature.”

However, at least one Republican lawmaker who rejected the legislation said the proposal was brought at the last minute and its language could endanger the state’s ongoing legal battle with big-dollar abortion chain Planned Parenthood, which Noem has suggested could go all the way to the U.S. Supreme Court.

South Dakota Republican Rep. Spencer Gosch, House speaker and member of the committee that blocked his state’s heartbeat bill, told the Argus Leader, “I am as pro-life as can be, and because of that, I do not want to do something that will jeopardize our involvement in a court case that could abolish abortion in this country.”

Regardless, Gov. Noem hit back at the Republican lawmakers who refused to consider the bill, arguing that the pro-life movement nationwide is unified around enacting such statewide measures to protect the lives of the unborn.

“Every single life is precious and deserving of our protection – but apparently South Dakota legislators think otherwise,” Noem said in a press release issued February 2. “It grieves me that they would take this unprecedented action at this time based on the advice of one out-of-state lawyer.”

“National pro-life leaders believe that now is the time to have this sort of protection in law to save lives,” Noem added.

The Republican governor, who has signed eight pro-life bills into law during her time in office, also pointed out that Texas’ heartbeat law, which “has essentially ended abortions in Texas,” has been given the green-light on three separate occasions by the U.S. Supreme Court, suggesting that a similar law in South Dakota would also be permitted to proceed.

“My focus is on ensuring that we are protecting as many South Dakota lives as possible,” she said.

The governor also pointed out that the absolute refusal of South Dakota lawmakers to even grant a hearing for a proposed bill was unexpected and flies in the face of precedent.

“The South Dakota state legislature has always guaranteed that every bill gets a hearing, and that is something that I’ve always loved about our process. We have rules and an open process, and we play by those rules. To our knowledge, this is the first time in decades that a bill has been denied a hearing,” Noem said.

“South Dakota deserved to have a hearing on a bill to protect the heartbeats of unborn children. We can hear heartbeats at six weeks, but I’m disappointed this bill was not granted even one hearing,” the governor added.

South Dakota’s proposal came amid a rash of similar measures which have been proposed or enacted in Republican-led states in anticipation of the Supreme Court’s ruling in Dobbs v. Jackson Women’s Health Organization, which concerns a law in Mississippi that bans abortions after 15 weeks gestation.

Many states, including Florida, South Carolina, and Arizona, have in recent weeks and months moved to enact new statewide laws protecting the unborn in anticipation of a pro-life ruling from the Supreme Court, which ostensibly has a conservative majority thanks to former President Donald Trump’s three judicial appointees.

A decision favorable to Mississippi in the Dobbs case could see the federal “right to abortion” established in the Court’s previous ruling in Roe v. Wade (1973) overhauled or struck down, permitting individual states to enact their own laws to allow or prohibit the killing of unborn babies.

Moreover, South Dakota is among roughly a dozen other states which already have “trigger laws” on the books which would work to immediately outlaw abortion in the state should the Supreme Court overturn Roe.

The nation’s highest court is expected to render its decision in Dobbs this summer.