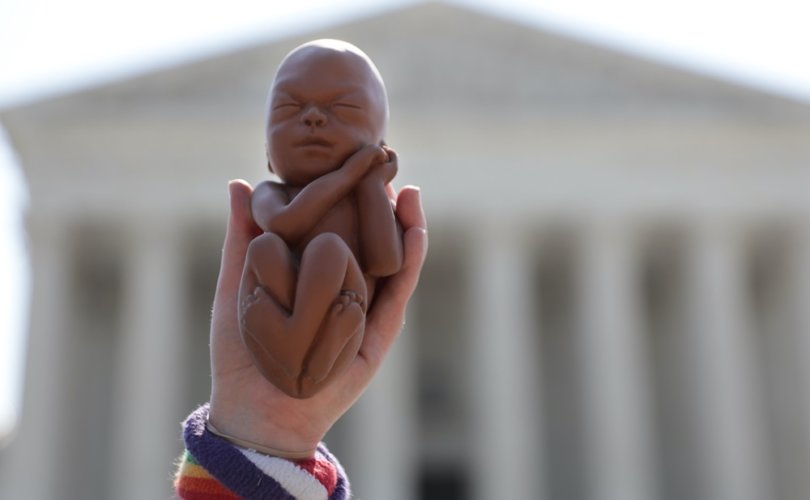 June 30, 2020 (LifeSiteNews) – Reacting to yesterday’s decision by the Supreme Court to strike down a Louisiana law requiring basic medical precautions in the event of abortion complications, conservatives criticized Chief Justice John Roberts’ siding with the liberals on the bench and reversing his own past decision to uphold a similar Texas law.

“Unreal,” commented Ryan T. Anderson of The Heritage Foundation on Twitter. “Justice Roberts just voted with the four liberals on an abortion case because of stare decisis… The precedent he’s upholding is from a case just four years ago, that he dissented on. If he thought the Court got it wrong four years ago, today was his chance to correct it.”

Unreal. Justice Roberts just voted with the four liberals on an abortion case because of stare decisis… The precedent he's upholding is from a case just four years ago, that he dissented on. If he thought the Court got it wrong four years ago, today was his chance to correct it

In his concurring opinion yesterday, Roberts, who was appointed by Republican President George W. Bush, invoked the legal doctrine of stare decisis, a controversial theory that claims past opinions gain legal weight simply by virtue of how long they last, regardless of how faithfully they reflect the law or the Constitution.

That doctrine, he wrote, “requires us, absent special circumstances, to treat like cases alike. The Louisiana law imposes a burden on access to abortion just as severe as that imposed by the Texas law, for the same reasons. Therefore Louisiana’s law cannot stand under our precedents.”

Roberts even acknowledged that he had “joined the dissent in Whole Woman’s Health,” the similar case in Texas, and continues “to believe that the case was wrongly decided. The question today however is not whether Whole Woman’s Health was right or wrong, but whether to adhere to it in deciding the present case.”

Now, however, “a very recent close decision in which he dissented apparently carries more weight. There are probably other examples, but those three come immediately to mind.”

Writing for National Review, Yuval Levin pointed out how Roberts had abused 18th-century conservative political philosopher Edmund Burke by writing about stare decisis, “This principle is grounded in a basic humility that recognizes today’s legal issues are often not so different from the questions of yesterday and that we are not the first ones to try to answer them. Because the “private stock of reason … in each man is small, … individuals would do better to avail themselves of the general bank and capital of nations and of ages.”

While Justice Clarence Thomas in his dissenting opinion had already emphasized how improper it was to refer to Burke in this context, Levin had a different angle.

“In the passage Roberts cites (as well as the one that Justice Thomas cites), Burke is talking about judgments made by statesmen, not by judges,” Levin wrote. “And it’s not as though he never expressed any views about how judges should think about precedent.”

“Burke described precedents as ‘one ground, though only one ground, of legal argument,’ and said that before they could be treated as authoritative they needed to be tested against five crucial criteria,” according to Levin.

He then proceeded to quote directly from Burke that precedents need to be “numerous and not scattered here and there;—secondly, concurrent and not contradictory and mutually destructive;—thirdly, to be made in good and constitutional times;—fourthly, not to be made to serve an occasion;—and fifthly, to be agreeable to the general tenor of legal principles, which over-ruled precedents, and were not to be over-ruled by them.”

Chief Justice Roberts, however, did not mention “any such criteria in thinking through his defense of a decision he disagreed with just four years ago. And if he had, it isn’t likely that his concurrence today would have withstood scrutiny under them.”

Live Action President and Founder Lila Rose had particularly strong words about the decision and its ramifications for unborn children.

“In the very act of bringing a case against Louisiana’s law, the abortion industry reasserted its obsession with profit, at any cost,” she said. “Abortion businesses claim to be healthcare entities, but resist any law that holds them to the same health and safety standards as the actual medical community. Abortion violently dismembers, decapitates, poisons, and crushes the living bodies of children. Abortion is not, has never been, and never will be healthcare.”

Rose said the “unjust ruling is a reminder that the lives of an entire people group have been wrongly placed in the hands of nine lawyers, several of whom abuse their power to violate the human right to life. With this decision, the Supreme Court has once again provided aid and comfort to the genocidal abortion industry which profits from the pain and fear of mothers and the deaths of their children.”

Rod Dreher, author of The Benedict Option, commented, “Two years ago, Roberts signed the dissent in the 2016 Texas case — a dissent that said the majority decision ‘exemplifies the court’s troubling tendency ‘to bend the rules when any effort to limit abortion, or even to speak in opposition to abortion, is at issue.’ Today, only four years later, Justice Roberts has Grown In Office™, and has voted to uphold the abortion status quo. Good Catholic Justice Roberts.”

Dreher asked, “Can anyone understand SCOTUS abortion jurisprudence? Can it ever be applied logically? I think it can, if you understand this principle: Pro-lifers must lose.”

Referring to the 1973 Supreme Court decision to legalize abortion, and to recent decisions on homosexual “marriage” and gender ideology, Dreher wrote, full of pessimism, that “Roe v. Wade will never be overturned. Civil rights laws will continue to be interpreted by the High Court to favor the Sexual Revolution in all its manifestations. We are no longer a socially conservative nation, and have ceased to be a Christian nation in any historically orthodox sense.”

He then took a swipe at Republicans and those claiming to be conservatives.

“The Christian leaders who told you to be cool, and trust the Republican Party and its judges — they were wrong. Maybe they meant well, but they were wrong. If you want to be a useful pawn for Conservatism, Inc., be my guest — but please stop deceiving yourself that this strategy is a winning one,” he said.

Richard W. Garnett, who teaches law at the University of Notre Dame, circled back to stare decisis, which, he said, “is not an absolute rule. Every justice — including, in several important and high-profile cases, Roberts — has voted at one time or another and for one reason or another to abandon an earlier case.”

“There is general agreement that it is, all things considered, a good thing for the law to be settled, but it is just as clear that, sometimes, errors need to be corrected,” Garnett pointed out.

He also criticized the vetting process of new judges during confirmation hearings. “Disingenuous questions,” Garnett wrote, “and slippery answers, about Roe and abortion have become a familiar feature of judicial confirmation hearings in the Senate Judiciary Committee.”

Josh Hammer of the First Liberty Institute tweeted in the same vein, “We need express litmus tests for the role of stare decisis in constitutional adjudication. Nothing less than Clarence Thomas’s position should suffice.”

We need express litmus tests for the role of stare decisis in constitutional adjudication. Nothing less than Clarence Thomas’s position should suffice.

“As we grieve this decision and the pregnant women who will be harmed by it, we continue to pray and fight for justice for mothers and children,” said Archbishop Joseph F. Naumann of Kansas City, who serves as chairman of the USCCB Committee for Pro-Life Activities.

“We will not rest until the day when the Supreme Court corrects the grave injustice of Roe and [Planned Parenthood v.] Casey and recognizes the Constitutional right to life for unborn human beings,” he added. “And we continue to ask all people of faith to pray for women seeking abortion, often under enormous pressure, that they will find alternatives that truly value them and the lives of their children.”

Marjorie Dannenfelser of the Susan B. Anthony List said the ruling was “a bitter disappointment. It demonstrates once again the failure of the Supreme Court to allow the American people to protect the well-being of women from the tentacles of a brutal and profit-seeking abortion industry.”

At the same time, she expressed her conviction that electing President Donald Trump to a second term would make things better.

“It is imperative that we re-elect President Trump and our pro-life majority in the U.S. Senate so we can further restore the judiciary, most especially the Supreme Court,” Dannenfelser wrote. “President Trump, assisted by the pro-life Senate majority, is keeping his promise to appoint constitutionalist Supreme Court justices and other federal judges. This is evidenced by Justices Gorsuch and Kavanaugh, who joined with Justices Thomas and Alito and dissented from today’s ruling.”

Just a few days ago, Gorsuch wrote transgenderism into law in Bostock v. Clayton County. Kavanaugh dissented but praised the outcome of the case, only opposing how the Court decided it.

But Gorsuch and Kavanaugh joining the conservative dissenters in the Louisiana abortion case may help reassure social conservatives going into the 2020 election that, despite the former joining Roberts and the liberals on the Bostock LGBT ruling, Trump’s judicial nominees have still made and would continue to make a critical difference compared to the nominees of former Vice President Joe Biden.

Daniel Horowitz, senior editor of Conservative Review, looked at the recent Supreme Court decisions and came to the conclusion that “Republican-appointed justices, aside from Clarence Thomas and maybe one other, will never overturn even recent expansions of abortion ‘rights,’ much less the foundation of Roe and [Planned Parenthood v.] Casey.”

No justice, apart from Thomas, had “affirmed that Roe is a complete myth. No other justice joined his dissent,” Horowitz stressed. “They all wrote dissents focusing on how there should be no standing in this case.”

“Kavanagh [sic] focused on how it wasn’t even clear that the doctors in the case would have been denied admitting privileges if they applied for them,” he said. “Gorsuch and Kavanagh [sic] joined Alito’s dissent suggesting that this case should be remanded and judged by a different standard, rather than Thomas’ dissent suggesting that this entire case should be thrown out – along with every case predicated on a right to murder.”

Horowitz admitted that the justices are not wrong, but “they refuse to show their cards. It’s not even clear how many of them, aside from Alito and maybe Gorsuch, would overturn Hellerstadt on principle without these technicalities, much less Roe. We don’t know how Kavanagh [sic] would vote in a similar case, especially given his obsession with precedent.”

“Precedent is a one-way street,” Horowitz commented. “The left wing can overturn it after 200 years, but once it does so even once, Republican judges will worship it as God’s word.”