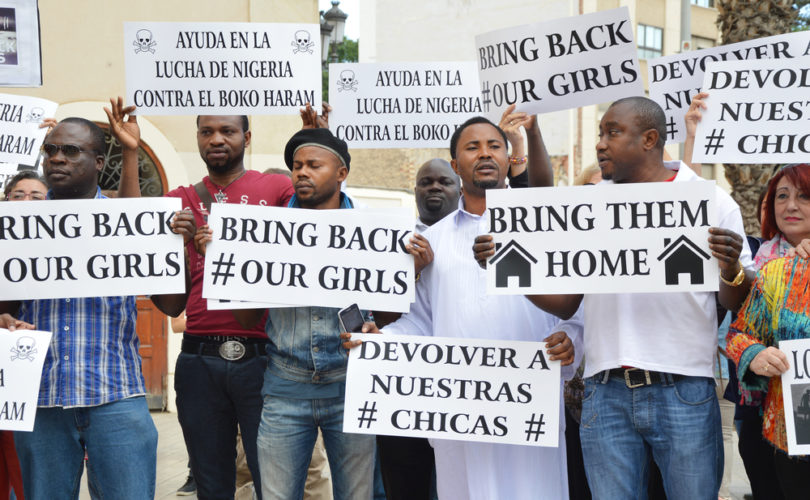 Nigerians take part in a demonstration in Spain calling on Boko Haram to return over 200 girls it abducted from a school in Chibok, Nigeria.rSnapshotPhotos / Shutterstock.com

ABUJA, Nigeria, June 12, 2015 (LifeSiteNews) – The United Nations is currently locked in a war of words about whether it is promoting abortion to young African women abused and impregnated by the Islamic extremists, with the nation's Christian leaders saying the UN is trying to depopulate the largely Christian country.

More than 1,000 young Nigerian girls were kidnapped by the Islamic terrorist group Boko Haram during one campaign this spring, and they were sold to ISIS troops for forced marriages or simply for use as sexual slaves. The Obama administration responded by having First Lady Michelle Obama launch the “#bringbackourgirls” Twitter campaign.

Earlier in May, the Nigerian army rescued 687 kidnapped women and girls. About 214 are visibly pregnant, carrying the babies of their abusers.

“Boko Haram insurgents deliberately raped women with the intention of getting them pregnant, so they would give birth to future insurgents as successors of their violent struggles,” Isa Gusau, spokesman for Borno State Governor Kashim Shettima, told ChristianNews.net. “The sect leaders…even pray before mating, offering supplications for [Allah] to make the products of what they are about doing become children who will inherit their ideology.”

Now, the United Nations is accused of pressuring those pregnant women to kill their babies, and sending “reproductive health kits” to displacement camps in the nation. The Foundation for African Heritage, a coalition of non-governmental organizations in Nigeria, has accused the United Nations Population Fund (UNFPA) of pushing abortion on the women and girls raped by Boko Haram terrorists.

Also, the Project for Human Development (PHD) Director-General Jerry Okwuosa confirmed to AllAfrica.com that “reports reaching us are that the UNFPA is offering the visibly pregnant Chibok girls abortion and sterilizing for the rest.”

“The UNFPA's abortion and sterilization services are geared towards depopulation,” Okwuosa said.

The pro-life group Society for the Protection of Unborn Children (SPUC) also complained that UNFPA is using “counseling” outreach to women to cover-up for offering abortion advice. “UNFPA is one of the leading international groups promoting abortion in the developing world. It is sending huge numbers of reproductive health kits to displacement camps in Nigeria where women rescued from Boko Haram have been taken,” the group said.

“The term 'reproductive health' is used to cover a range of interventions including abortion,” a spokeswoman explained. “SPUC fears that these emotionally vulnerable, malnourished women will be pressured into aborting their babies.”

The United Nations Population Fund responded to the criticism, insisting that it always abides by the government's laws.

“All UNFPA work is at the request of governments, in line with their national priorities and plans. Its programs are designed and implemented by and with the government of Nigeria and respect the nation's sovereignty and laws,” UNFPA senior adviser Azza Karam said, according to The Christian Post.

Abortion is against the law in Nigeria. Section 228 of the Nigerian Criminal Code says, “Any Person who with intent to procure miscarriage of a woman whether she is or is not with child unlawfully administers her to take any poison, or other noxious thing or uses any force of any kind or uses any other means whatever is guilty of felony and is liable to imprisonment for seven years.”

“UNFPA does not promote abortion as a method of family planning in any of the more than 150 countries where it works, including Nigeria. It promotes voluntary family planning, so women can exercise their human right to determine freely the number and spacing of their children. This helps reduce unintended pregnancies and recourse to abortion,” Karam said.

Karam countered accusations, concluding that “All UNFPA-supported interventions are approved, owned and implemented by Nigeria and respects the nation's sovereignty, laws and priorities.”

One fact not in dispute is that the United Nations Population Fund (UNFPA) is one of the most influential pro-abortion groups in the world, not only defending abortion, but passing international laws to pressure Third World countries to practice widespread “reproductive freedom,” a euphemism for abortion.

Not surprisingly, pro-abortion organizations in America call on the UNFPA, and the United States, to offer the women abortion. The Washington, D.C.-based Center for Health and Gender Equality told Cosmopolitan magazine that it believes the United States government should be offering abortions to the Nigerian women. Cosmopolitan's Jill Filipovic proclaimed it is “vital” that the women abort these two hundred children.

Yet some in the West, even in the mainstream media, oppose what the UNFPA is doing – or allegedly doing. Miranda Devine of Australia's The Daily Telegraph commented, “Instead of agitating against the unfair stigma often applied to the children of rape, or pushing for the U.S. government to help Nigeria fight Boko Haram, Western activists are using their considerable influence to push for abortions for victims of Islamist sexual violence.”

Some Christians say legalization of abortion is not a solution, but what would be beneficial would be to change the sexual mores of Muslims in Islamic countries. Islam teaches Muslims to follow the example of Mohammed's life and marry girls as young as six, having sex with them at age nine as “the prophet” did and thereby often contributes to the problem of rampant preadolescent pregnancy.

Instead of seeking to influence change that behavior, the UNFPA advocates abortion as the solution.

Abortion is not the solution for Boko Haram’s rape victims: Pro-life spokesmen worldwide