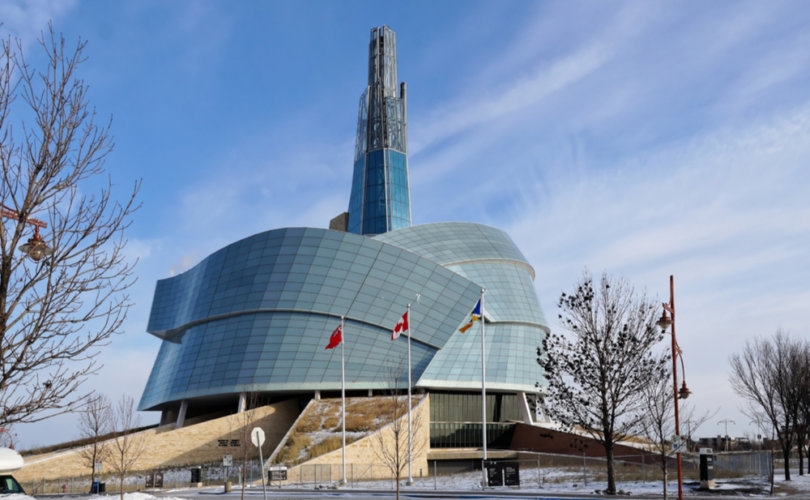 WINNIPEG, Manitoba (LifeSiteNews) — The Canadian Museum for Human Rights has banned admission to those who have chosen to not get the abortion-tainted COVID shots, despite its very namesake claiming rights for all.

The museum located in Winnipeg, Manitoba, says that banning the un-jabbed from access is so that it can be in “compliance with the current public health order in Manitoba.”

“All Museum visitors 12 and older must provide official proof of full vaccination against COVID-19 along with photo ID,” says the museum.

Kids under 12 who are not jabbed can only visit if they are accompanied by an injected adult.

The museum says only those with approved Health Canada COVID jabs qualify as “fully vaccinated,” and visitors are to use either Manitoba’s vaccine passport or the one from the federal government.

Manitoba was one of the first provinces to enact a local vaccine passport system, which was first put in place in late July.

The rules banned the un-jabbed from accessing sports venues, museums, restaurants, or any other place that mandates proof of a jab to enter.

In early August, due to provincial rule changes, the ban on the un-jabbed was lifted after the province eased its vaccine passport.

In early September, the policy was reinstated after the provincial government again enacted its strict COVID passport. Since then, the un-jabbed have been banned from visiting any museum as well as many other venues in Manitoba.

The Canadian Museum for Human Rights has been open since 2014 and is owned and operated by the federal government.

The museum’s very own mandate states, “As the world’s first museum dedicated to human rights, we are centred around the idea that respect and understanding of human rights can serve as a positive force for change in the world.”

Lawyer for the Justice Centre for Constitutional Freedoms (JCCF) Andre Memauri told LifeSiteNews that the museum’s mandate claiming it is all about human rights is “ironic” considering the unvaccinated are banned from entering.

“Ironically, the museum’s premise is founded on the rights of the few and alienated. Any mandate that restricts access to the unvaccinated violates this very premise,” said Memauri. “This segregation does not bring about positive change in the world, it sows the seeds of greater division and hatred.”

The Canadian Museum for Human Rights had promised in mid-July to open after being closed for months due to COVID rules, and that when they would do so, it would be under compliance with the province’s vaccine passport rules.

In anticipation of the July introduction of Manitoba’s vaccine passport, Canadian Museum for Human Rights CEO Isha Khan issued a statement on July 20 defending her decision to ban the un-jabbed from visiting.

“Over the last few days, we have received numerous questions, comments and criticism about our decision to reopen on July 27 in compliance with the provincial public health order,” wrote Khan. “Currently, the law specifically allows us to admit only those visitors who have been double vaccinated against COVID-19 or children under 12 accompanied by fully vaccinated adults from their household.”

Khan claimed that banning the un-jabbed was not a form of “discrimination.”

“I understand people feel like the Museum is discriminating against those who are not vaccinated. It is important, however, to ground our behaviour in human rights principles,” wrote Kahn.

Kahn stated that “[d]iscrimination is defined in law as treating a person differently on the basis of some characteristic” such as “age, ancestry, ethnic origin, sex, sexual orientation, religious belief, gender identity and disability.”

“We have to be careful about equating a choice not to get vaccinated with these protected characteristics when looking at what can be considered discriminatory.”

Khan argued that public health laws are “reasonable restrictions on individual behavior for the broader health and safety of the general public.”

Many do not want the COVID injections due to safety concerns surrounding the jabs.