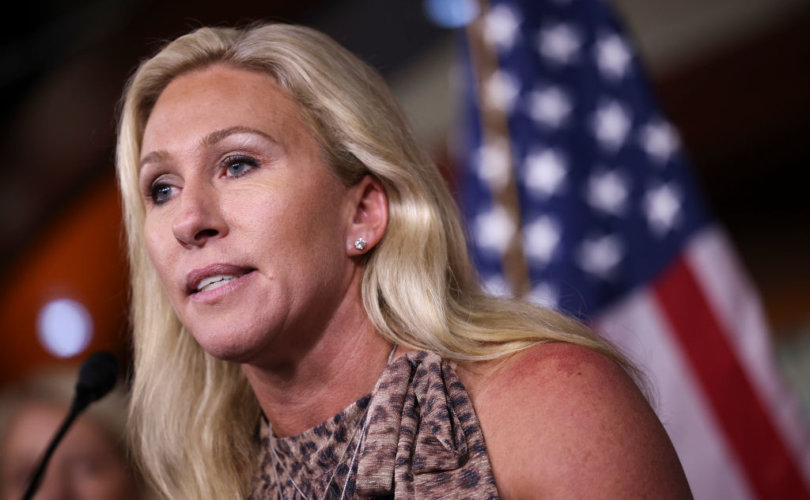 (LifeSiteNews) — Rep. Marjorie Taylor Greene said January 6 prisoners are being “treated like second class citizens” by not being allowed to receive Holy Communion or practice their religion if they are “unvaccinated.”

Greene joined Fox News host Tucker Carlson on November 8 to discuss the treatment of the prisoners of the January 6 protest at the Capitol.

The treatment of the J6 defendants at the DC Jail is appalling.

I joined @TuckerCarlson tonight with details from my visit and to tell their story. pic.twitter.com/HnEFqrq5qq

The popular news host first played audio recording of Greene’s recent visit to the D.C. prison where the January 6 protestors are still being held.

Asking the prisoners if they were allowed to have “religious services,” Greene was told emphatically “no…we do our own.”

“I submitted for Communion last week and they said the only way to get Communion is to get vaccinated, which is against our First Amendment Rights. So they’re prohibiting us from practicing our religion,” said one.

“Just so we could get the vaccine,” added another inmate.

Family visitations were also restricted for the inmates, with some attesting that they had not seen family “since April.”

Commenting on the audio recording, Greene told Carlson that it has been “patriot hunting season ever since January 20.”

“What I saw Thursday night when I went to the D.C. jail, after months of persistence trying to get in, just to see what was happening in there because of the terrible rumors that were coming out of that jail, everything that I’ve heard – I found was true,” Greene said.

She outlined a vaccination-based discrimination for inmates, with injection status leading to wider permissions, such as a “haircut” or “go to chapel.”

“You see, these people are being held. They were held for four months, 23 hours a day in solitary confinement in their cell, 1 hour out. Then followed by two months, 22 and 2: 22 hours in their cell, 2 hours out.”

“And now they’re able to be out five hours at a time if they’re on good behavior,” Greene said. “But you see if they’re not vaccinated they can’t get a haircut, they can’t shave. They’re given Nair to chemically remove their hair, instead of being able to get a haircut.”

In an extensive Twitter post Monday, Greene continued her exposé of the conditions endured by the January 6 prisoners, saying that “defendants are denied basic needs because they are unvaccinated.”

1. One of the benefits as a Member of Congress is visiting different types government facilities to provide oversight.

On my recent visit to the DC Jail one of the things I picked up was some religious material.

“Most of them have Bibles and pray and do Bible study daily,” she wrote, adding that she had prayed with the inmates while on her tour of the “Patriot Wing.”

“Most of them are also unvaccinated & don’t want the vaccine,” Greene added. “Covid and unvaccinated people is no excuse to deny pre-trial defendants & prisoners their basic human rights.”

Greene and her staff are now drawing up a report following her visit to begin “a plan for real prison reform.”

The congresswoman’s account was corroborated by an aunt of one of the detainees, Cynthia Hughes, in an interview on Steve Bannon’s “War Room” show.

Hughes described the jail conditions as “really, really tremendously horrendous,” but affirmed Greene’s observation that the detainees were enduring such conditions while still only awaiting trial. “But the bigger issue is the fact that they are being kept in pre-trial detention — we’re going on 11 months now,” she said.

“You have men languishing in jail in horrendous condition with allegedly trespassing charges,” she said.

Despite constant claims by the media and Democrats that January 6 was an “armed insurrection,” the FBI admitted in August that it believed the events of the day were “not centrally coordinated by far-right groups or prominent supporters of then-President Donald Trump.”

Viral videos showed people engaging in physical altercations with police, pushing against security barricades, breaking through windows, trespassing in congressional offices, and climbing on walls, causing the vote certification to be suspended and lawmakers to be evacuated from the chambers. Other videos, however, showed that many were let into the Capitol by police and simply walked the halls after the initial breach.