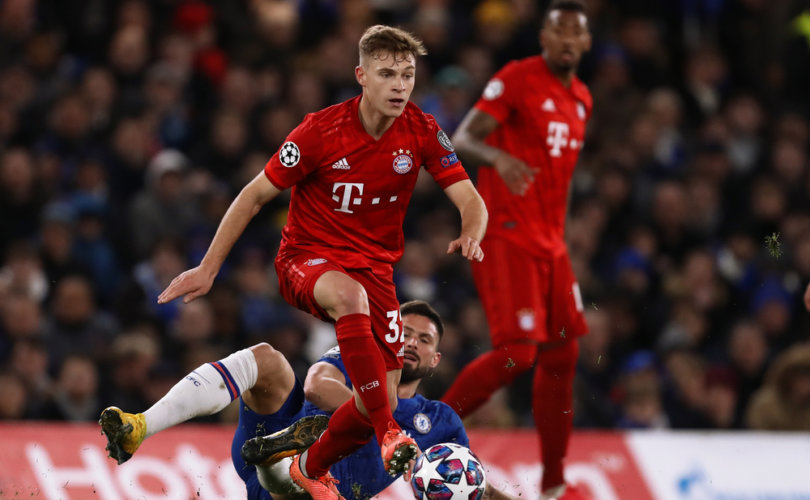 MUNICH (LifeSiteNews) — Elite European soccer team Bayern Munich won’t pay the salaries of five unvaccinated players who come into contact with a teammate who tested positive for COVID-19, according to German news reports.

Serge Gnabry, Joshua Kimmich, Jamal Musiala, Eric Maxim Choupo-Moting, and Michael Cuisance have all been placed into mandatory quarantine after reportedly coming into contact with an individual who tested positive for the novel coronavirus, German magazine Sport Bild wrote Sunday. Currently, COVID-related restrictions in Germany mandate anyone who is un-jabbed to enter a 10-day quarantine if they make contact with someone — most likely vaccinated — who merely tests positive for COVID.

According to a report in The Athletic, the club intends to withhold the wages of the five un-jabbed players because of a new rule which came into effect November 1. Employers are no longer required to pay quarantining staff if they have not yet taken an abortion-tainted shot. The rule could amount to a staggering loss of €400,000 ($450,000) per week for superstar midfielder Kimmich.

The report noted that some of the players are preparing to launch legal action against the club for docking their pay based on the decision to forego the jab, although no names were mentioned. Bayern Munich has yet to comment publicly on the situation.

Kimmich spoke to broadcaster Sky Sport, stating that his reason for deciding against the jab was due to “concerns about the lack of long-term studies.”

“I am of course aware of my responsibility. I follow all hygiene measures and get tested every two to three days. Everyone should make the decision for themselves,” he said.

The soccer star insisted his decision does not make him a “COVID denier or an anti-vaxxer,” and lamented the polarization between those who have taken the shot and those who have not.

“I find it a shame that there is only vaccinated and unvaccinated in this debate. Unvaccinated then seems to equal COVID denier or anti-vaxxer. But there are other people who just have concerns, whatever their reasons, and I think we should respect that as long as they also stick to the measures.”

Continuing, Kimmich said he is not “categorically” against taking the jab in the future but affirmed he still has “some concerns.” “It is absolutely possible that I will get vaccinated in [the] future,” he added.

Former Chief Executive of Bayern Munich Karl-Heinz Rummenigge supported the club’s decision to penalize the players, saying, “Everyone has tried to sort out the non-vaccination issue and find a solution … [after fining players] maybe it will work now.” If the wage cuts are confirmed, Rummenigge said it “should be understood as a sign that the club is now reacting. Because it must react.”

The club’s coach, Julian Nagelsmann, was subject to a 14-day quarantine in late October, despite being “fully vaccinated.”

LifeSiteNews contacted Bayern Munich to confirm whether the players had tested positive for the virus and if the players would have their wages cut but did not immediately receive a reply.

Despite the efforts of the German authorities to push COVID jab uptake as a “way out” of the supposed pandemic, coronavirus “vaccine” trials have never produced evidence that the shots stop infection or transmission. They do not even claim to reduce hospitalization, but the measurement of success is in preventing severe symptoms of COVID-19 disease.

As COVID cases have surged in heavily vaccinated countries like Israel, the U.K., and the U.S., including among vaccinated individuals, hopes that vaccination would prevent infection or halt transmission have dwindled.

The list of FDA-recognized adverse events has grown from severe anaphylactic reactions to include fatal thrombotic events, the inflammatory heart condition myocarditis, and neurologically disabling disease like Guillain Barré Syndrome, as well as thousands of recorded deaths and permanent disabilities.