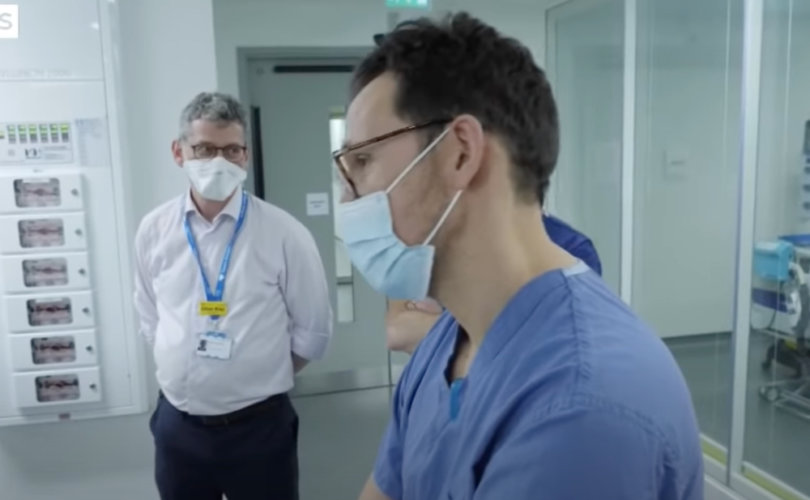 LONDON (LifeSiteNews) — The U.K.’s health secretary Sajid Javid has come under fire for his proposed COVID jab mandate for health staff, after a practicing consultant questioned Javid over the logic of the policy, calling instead for acknowledgement of the benefit of natural immunity.

During his hospital walkabout, accompanied by a large media presence, Javid asked NHS staff what they thought about his rules requiring NHS staff to be injected for COVID-19 or lose their jobs. Under recently approved laws, NHS and social care staff must be injected with the COVID shots in order to continue working, with the first dose by 3 February. Staff who worked in health settings since the start of the COVID-era, and who do not submit to the mandate, will be jobless come April 1, 2022.

After an initial uneasy silence from the five staff questioned, James responded to Javid.

“I’m not happy about that. I had COVID at some point, I’ve got antibodies, and I’ve been working on COVID ICU since the beginning,” attested James.

“I have not had a vaccination, I do not want to have a vaccination,” he added, before noting the injections’ failure to reduce transmission. “The vaccines are reducing transmission only for about eight weeks for Delta, with Omicron it’s probably less. And for that, I would be dismissed if I don’t have a vaccine? The science isn’t strong enough.”

Javid was unable to answer James’ arguments, merely insisting that “I respect that, but there’s also many different views.”

Doubling down, James pointed to the protection gained from previous infection with COVID-19, referencing colleagues who had such protection and haven’t taken the injection.

Appearing unable to answer the consultant’s points, Javid alluded to the advice the government is receiving about the mandatory NHS injections — which government papers themselves suggest could lead to over 70,000 staff sacked, in addition to the already existing 90,000 vacancies.

“Well, we take advice on when, and how much … we take the very best advice, from people who are vaccine experts” said Javid.

WOW. Consultant Dr Steve James, 10yrs at KCH, today courageously told the Health Secretary why vaccine mandates are wrong, even more so in light of omicron.

Imagine losing this talent from the NHS, let alone ending his career.

The video of the encounter quickly went viral. The Guardian reported that only half a day after it was published on Twitter, it had received over a million views.

James has garnered much support online, while Javid’s inability to answer the doctor’s points earned him criticism.

Dr Steve James encourages all those opposed to mandates to make their voices heard.

It is important that people have their say on this critical issue that will affect hundreds of thousands of clinical, auxiliary and admin staff.

Say no to mandates Together pic.twitter.com/hP9ZISTdFX

In response to the jab mandate, a group of NHS staff has been set up, called “NHS100k,” after the amount of staff still predicted to leave over the mandate. “We need to take action to stop any vaccine mandate coming in. If the government can infringe basic human rights for NHS staff, they WILL do this upon the general populace thereafter,” warns the group.

The movement is galvanizing NHS staff to wear a purple ribbon on their uniform, to demonstrate their rejection of the jab mandate.