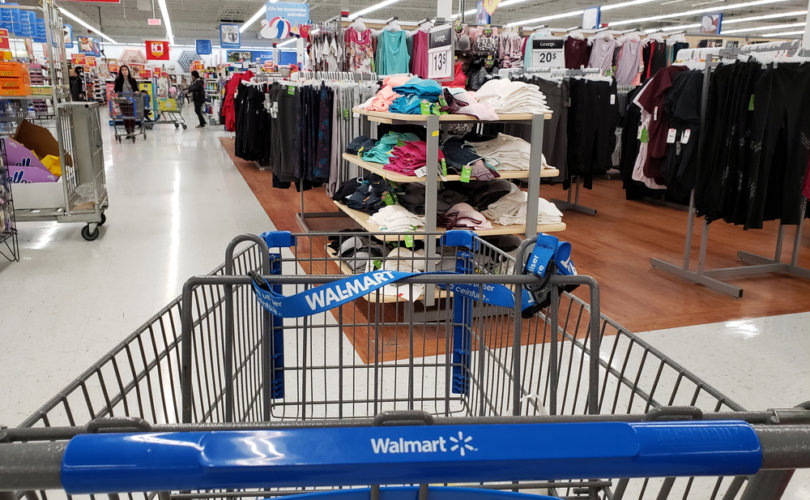 QUEBEC CITY (LifeSiteNews) – The Quebec government is coming down harder on citizens who have not taken an experimental COVID jab, restricting them in big box stores to purchase only “essential” goods.

Shoppers who refuse to show their vaccine passports when entering a large retail location will only be allowed to enter the premises if they agree to be accompanied by an employee who will ensure that they do not purchase anything not approved for unvaccinated consumers by the government.

Quebec has announced that unvaccinated citizens are not allowed inside of large stores unless accompanied by a Health Warden who will monitor them to ensure that they do not purchase anything except for food and medicine. pic.twitter.com/LEfP0GYHPE

Well-known Canadian YouTube personality Viva Frei, who is a lawyer, visited a local Walmart to test the new regulation and posted a video about it. Frei ran for the People’s Party of Canada in the September 2021 election in the Montreal area, and has been an outspoken critic of his province’s response to the declared pandemic.

He was initially refused entrance for not showing proof of vaccination, but he protested that it was his right to buy essential goods like medicine even without showing his papers.

“I’m allowed to go to the pharmacy without showing my vaccination passport,” he said. “I would like a Tylenol for the headache that this is all giving me.”

Walmart in Quebec is barring the unvaxxed. https://t.co/kiuQxjpozk This is La Belle Province under the tyrannical & wholly unscientific rule of @francoislegault Share away. @walmart is enforcing discriminatory policies, and the rest of the world should see what is going on here. pic.twitter.com/q9GCm3O5sJ

Frei had expressed in the past that he had taken the first round of COVID injections, but he is vehemently against vaccine-based segregation.

I am double-vaccinated. I will not download the app. I will not frequent any business that attempts to scan me for a QR code. And I will speak out on behalf of those who will be treated like second-class citizens because of this inhumane and unconstitutional “vaccine passport”.

The ministerial decree applies to stores with a surface area of 1,500 square metres or more, with the exception of grocery stores, pharmacies and gas stations. The intent on behalf of the provincial government is that the expanded vaccine mandate coerces more people to get receive an experimental and abortion-tainted COVID jab.

The decision is not popular with all retailers, however, as some feel they are unfairly burdened, especially hardware stores that have been deemed essential since the pandemic was declared.

Patrick Delisle, head of marketing for Quebec hardware chain Canac, told reporters, “There are several reasons we’re disappointed. … First of all, we would’ve liked to be treated as an essential service — we’ve been essential since the beginning of the pandemic.”

“We’re not going to ask someone who’s dealing with water damage [in their home] if they’re vaccinated or not,” he added. “It’s really frustrating to have to manage clients living situations like that … it’s not our job.”

Stores that sell the same goods but are smaller can still operate as normal. Simon Gagnon, owner of the sporting goods retail outlet Sports Experts, is worried that the new measures will make things prohibitively expensive for retailers that will now have to hire security guards or employ more employees to check passports at the entrance.

“What scares us is that instead of lining up, people will go shop somewhere else,” he said.