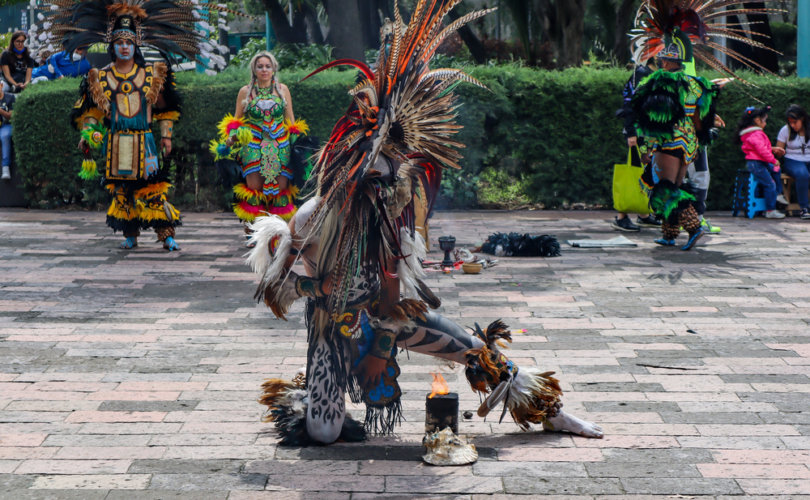 ST. JOHN, Indiana (LifeSiteNews) – The Diocese of Gary has said that a press release regarding the opening of a new exhibit at a Catholic shrine in Indiana featuring “traditional Aztec dance performances” – intended to “bless the plaza,” according to shrine administrators – is “misleading” and that no such Aztec “blessing” will take place.

Bishop Robert J. McClory of the Diocese of Gary, Indiana, is slated to preside over the grand opening ceremony, which will take place on May 22 at The Shrine of Christ’s Passion in St. John, Indiana.

The prelate is to be accompanied by Father Sammie Maletta, the parish priest of the neighboring St. John parish church, and Opus Dei priest Father Francis “Rocky” Hoffman, executive director of Relevant Radio.

According to a press release for the upcoming event, the popular midwestern shrine, which features a prayer trail populated with “40 beautiful life-size bronze sculptures representing the various stages of Jesus’ Journey to Calvary,” will unveil a new plaza dedicated to Our Lady of Guadalupe on May 22.

The plaza contains two new statues depicting St. Juan Diego’s vision of Our Lady – cast in bronze – and a small chapel, which the shrine website describes as “simple but stunningly beautiful.”

After noting that Bishop McClory and Frs. Maletta and Hoffman will be “officiating” a ceremony on that afternoon, the shrine’s administrators stated that “[g]uests will witness a dance troupe that will in essence bless the Plaza in the Aztec Traditions.”

In Catholic theology, a blessing is a sacramental, and according to the Catechism of the Catholic Church, “derives from the baptismal priesthood.” While lay Catholics may preside at certain, limited blessings, the CCC (n.1669) reads, “the more a blessing concerns ecclesial and sacramental life, the more is its administration reserved to the ordained ministry (bishops, priests, or deacons).”

Although it is not known exactly which group will perform the dances at the shrine, typical Aztec cultural dances, known as danza Azteca, are ancient ritualistic performances, handed down from the pagan Aztec civilization.

The dances have been described as carrying spiritual significance to those who perform them, imitating a prayer of honor and worship given to the pagan gods of the Aztecs.

One troupe based not far from the shrine, in Chicago, describes its performance of the Aztec dances as “a way of celebrating and preserving Mexico’s ancient culture.”

LifeSiteNews received comments from the director of communications for the Diocese of Gary, clarifying that while an Aztec dance troupe has been invited to perform a routine at the opening ceremony, that “there are no plans for them to bless the shrine’s newest exhibit.”

Describing the shrine’s press release as “misleading,” the diocesan representative added that “the only blessing to take place will be officiated by the most Reverend Robert J. McClory, Bishop of the Diocese of Gary, and drawn from the approved Catholic book of blessings.”

In 2019, Pope Francis came under fire for celebrating a “highly symbolic tree-planting ceremony” in the Vatican Gardens, decried by many critics as being an Amazonian “pagan” ritual.

Rexcrisanto Delson, the grandson of a former shaman, told LifeSiteNews at the time that Francis’ participation in the ritual was contrary to the Gospel’s call to discipleship in Christ.

“Instead of leading the indigenous to salvation, the opposite seems to be taking place,” Delson said.

While slated to participate in the May 22 ceremony involving a pagan ritual, Maletta, who administrates the parish immediately behind the shrine in St. John, has previously spoken out strongly against the Traditional Latin Mass (TLM), describing the ancient Rite of the Catholic Church as “dead.”

He lamented those Catholics who, unhappy with the trajectory of modern culture, consequently “try to cling to what was.”

“I really don’t understand why people are attracted to that,” he said.

“The Holy Spirit is always calling us forwards, not backwards,” Maletta argued, adding his view that the Traditional Mass “is not an answer” to apparent problems in the church.

Regarding the Mass of the Ages, Maletta said “that church is dead; it’s never going to come back again.”

Bishop McClory, on the other hand, has welcomed the TLM in his diocese.