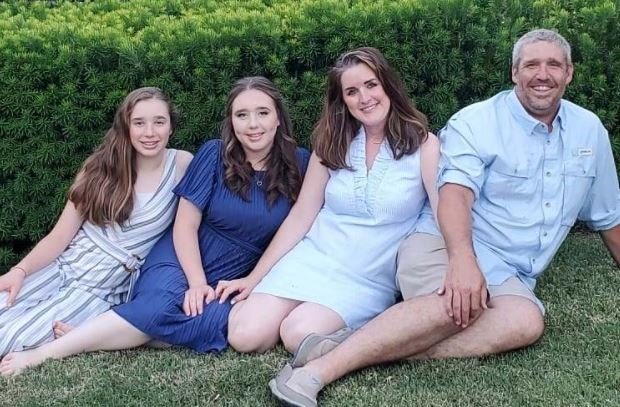 (LifeSiteNews) — An Alabama man whose doctor dismissed pleas that he be given ivermectin died just nine days after being admitted to hospital with COVID-19.

Todd Abbott, 43, died Friday at UAB Medical Center West in Bessemer, Alabama, after doctors refused to honor several appeals by his wife to have ivermectin administered to him. Abbott, a father of two teenage daughters, was later transferred to intensive care and put under sedation while on a ventilator.

Tragically, the man’s condition worsened as his kidneys shut down, fluid built up in his lungs and a blood clot developed in his leg.

Melissa Abbott, Todd’s wife of 19 years, is now left to pick up the pieces after losing her husband in such devastating circumstances.

“I’ve never felt so much pain. My heart is breaking into pieces. The joy has been ripped from my life,” Melissa told LifeSiteNews. “So now, I’m supposed to know how to move on and raise our teen daughters at such a precious age for a father to be around …”

Melissa did everything possible to have other treatments such as ivermectin given to her husband, even engaging a law firm to persuade the hospital to take action, but from the outset she felt the doctor treating Todd “spoke disrespectfully” and dismissively to her.

“I also have overwhelming anger for the medical system and the doctor who treated my husband and, up to the day he died, still refused to give him the Ivermectin and told me he wasn’t going to discuss it,” she explained.

Melissa had told LifeSiteNews last week, before her husband’s death, that she felt “like a prisoner” and that the doctors were “the wardens” due to their refusal to administer ivermectin to her COVID-stricken husband.

The bereaved mother now plans to seek further legal help in trying to ensure doctors at the hospital learn from her husband’s death, so that no other family has to experience the loss the Abbott family has.

“The night before, my husband had been doing pretty good and his stats were looking good … the next morning they said his lung had collapsed, his heart rate dropped and his oxygen was at 50-60%,” she told LifeSiteNews. “I went to say my goodbyes with my father-in-law and brother-in-law … I didn’t want our daughters to see him in the state he was in … it’s the worst thing to ever endure. I was with him when he passed away.”

“The doctor was always very grim and seemed to feed off of giving me the worst news … every time I asked about trying the ivermectin he would immediately shoot it down, saying we weren’t going to talk about it, like he had all the rights to my husband’s health,” she continued. “I am looking into my options for legal rights in regards to my husband’s health care or actually lack thereof.”

Melissa is also faced with the daunting task of having to provide for their two children, Carissa and Ava, without the help of the hardworking man she loved so dearly.

“This is the worst thing I’ve ever had to endure and don’t know how I will ever go on, while trying to raise our daughters alone,” she said.

Todd’s obituary says that he “lived his life never meeting a stranger, while blessing people with his infectious smile.”

“You knew you were in his circle of friends if he called you buddy. He truly was a servant of the Lord working as a Roadmaster for Watco Railroad and doing for others less fortunate, whether it was handing out food on the weekend or participating in a building project for someone in need,” the tribute continues. “He was never afraid of hard work. Todd loved God, his family, Alabama Football, and hunting with friends. If you were blessed to know Todd, then you knew you had a friend for life who would do anything for you.”

An intensive care specialist and member of the Frontline COVID-19 Critical Care Alliance (FLCCC) last month said ivermectin was the drug that “could end the pandemic.”

“There is just a mountain of evidence supporting its use and it is being used effectively in many portions of the world, but there is a lot of resistance to Ivermectin,” Dr. Pierre Kory told Newstalk on August 13. “In fact, there is a very strong and deep opposition in public health agencies — in the ivory towers — and that is something I have had to become an expert on.”

“This is a repurposed drug. It is cheap, it is off-patent and you can’t really make a significant amount of money off of it,” he added. “Watching what happens to a drug like that has been astonishing. It has been a lesson in life and not one that I have happily learned.”

Kory said ivermectin is being “censored and buried” because it threatens “probably the largest financial interests you can imagine,” with the WHO, FDA and European Medicines Agency continuing to claim there are not enough studies to allow for its full authorization.

“That is a tactic that they are using to very great effect,” Dr. Kory said. “They complain that there is no ‘proper’ trial as they define it. So, really, they are creating a system where only really large pharma-funded trials are recognized as valid. That is actually wrong; it departs from medicine and it actually leads to this irregular adoption of medicines.”

Ivermectin trials have so far shown “massive reductions” in mortality, hospitalization, time to clinical recovery and viral clearance times, according to Kory.

The intensive care specialist is among a growing number of experts who say these inexpensive treatments for COVID-19 are being suppressed to ensure experimental vaccines are given emergency use authorization by health authorities.