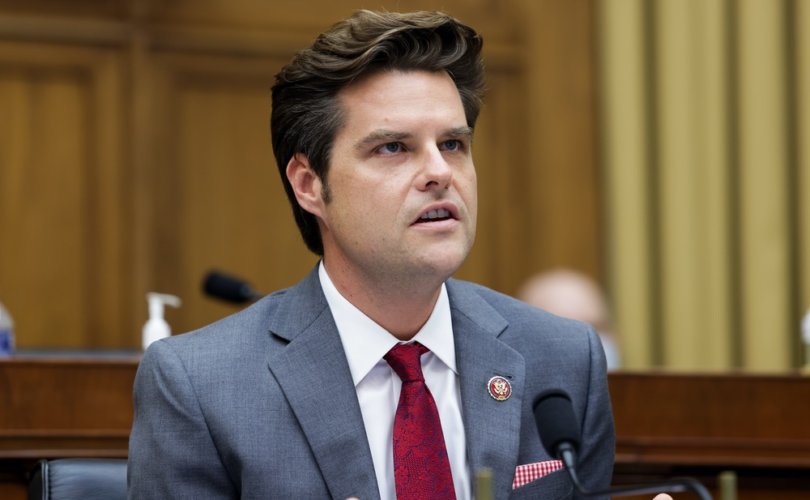 The request had been temporarily blocked by House Judiciary Committee chairman Jerry Nadler. But, according to the Washington Examiner,  Nadler “ultimately capitulated after the Florida congressman pressed further and claimed he had a ‘consultation with majority staff’.”

Rep. Majorie Taylor Greene of Georgia celebrated the victory on Twitter, saying “I’m thankful that my colleague from Florida could help them find Hunter’s laptop by entering it in the congressional record.”

I’m thankful that my colleague from Florida could help them find Hunter’s laptop by entering it in the congressional record. https://t.co/lFl5RR5vXV

Gaetz himself celebrated the event on Twitter and in his post demanded that Hunter Biden, son of President Joe Biden, be subpoenaed.

“Moments ago, I successfully entered the hard drive of Hunter Biden’s laptop into the Congressional Record,” he wrote.

Moments ago, I successfully entered the hard drive of Hunter Biden’s laptop into the Congressional Record.

After grilling FBI Cyber Division assistant director Bryan Vorndran regarding Biden’s infamous laptop on Tuesday, Gaetz asked that the contents of the laptop be entered into the official Congressional Record. Immediately after the request was made, Nadler, a Democrat, objected to the move and announced he was blocking the request “pending further investigation.”

After Vorndran’s testimony in which he claimed he didn’t “have any information about the Hunter Biden laptop,” despite his position as assistant direction of the Bureau’s Cyber Division, Gaetz pivoted his line of questioning to announce that he is seeking “unanimous consent to enter into the record of this committee, the contents of Hunter Biden’s laptop.”

After the request was heard, Nadler said he “object[s] pending further investigation,” at which point Gaetz asked, “What’s the basis of that objection?”

“It was a unanimous consent request and I object pending further investigation … It may very well be entered into the record after we look at it further,” replied Nadler, ending the conversation.

While the Biden laptop story was initially maligned as “Russian disinformation” by mainstream media and government during the period of the 2020 presidential election, the authenticity of the laptop was finally confirmed by the mainstream outlet, The New York Times, earlier this month.

Jack Maxey, a former co-host of Steve Bannon’s War Room show and a member of LifeSite’s Faith & Reason, has been the main person behind the push to have the Biden laptop known to the public. In his estimation, the contents of the laptop are not only relevant for providing context to the alleged corruption of Hunter Biden but also his father, U.S. President Joe Biden.

In an interview with LifeSiteNews’ John-Henry Westen, Maxey said that many governmental agencies, including the FBI, knew “everything that’s in this [laptop] for now almost a year and a half,” and yet did not reveal it to the American people during an election cycle with one of the main candidates being compromised by that information.

In the conversation with Westen, Maxey detailed some of the moral corruption of Hunter Biden, and how his family did not report him to authorities over his alleged sexual and child abusive behavior. He also explained how the laptop gives “a dark insight” into the pressure the Biden family was putting on Hunter to essentially “monetize Joe Biden’s office.”

According to Maxey, this monetization has come in the form of shady business dealings in Ukraine, China, and many other countries highly relevant in today’s geopolitical environment.

In effect, Maxey alleges that the “real threat” to America is that “Joe Biden is not in charge of the county” but is rather a puppet of the intelligence community who had kept the laptop’s contents a secret from the people.