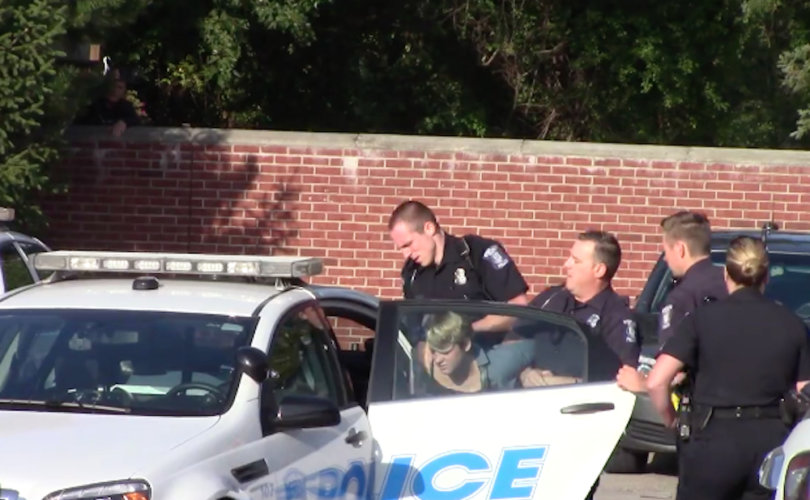 ALEXANDRIA, Virginia, September 15, 2017 (LifeSiteNews) — Six pro-life activists, including two priests who were arrested at a Virginia abortion facility this morning attempting to persuade women to choose life for their babies, have been released on their own recognizance.

They were charged with trespass and obstruction of justice and scheduled to appear for an arraignment September 21.

Four pro-life activists were also arrested at Michigan abortion facility in what organizers are calling a “Red Rose Rescue.” They were released mid-morning after being charged with trespass.

Monica Migliorino Miller, Will Goodman, Abby McIntyre and Matthew Connolly were arrested at the Northland Family Planning in Sterling Heights, a suburb of Detroit.

Imbarrato, who has been full time with Priests for Life for two years, told LifeSiteNews it’s possible three women “may have changed their minds or left” after the six pro-lifers entered the Virginia abortion facility with red roses and began counseling the women in the waiting room.

“We did decide to offer passive resistance to try and paralyze the operation of the abortion facility for as long as possible,” he told LifeSiteNews shortly after being released.

“For all intents and purposes, the place was locked down for the bulk of the time we were there,” he said. “Once the police got there, they locked the door to the facility, so nobody came in … One gal came in and it looks like she left.”

Imbarrato, 65, took part in the rescue “to send a message to the pro-life movement and to my fellow clergy that I think that our response to the massacre to children has not even been minimally proportional,” he said.

All the pro-life activists who took part in the Red Rose Rescue passively resisted arrest.

“We will not leave the abortion clinic and leave the babies who are about to be aborted on our own power, we have to be taken away,” she said. “I think the officers … tried to treat us with some gentleness.”

However, Matthew Connolly, arrested in Michigan, was suffering from neck pains and going to a nearby hospital emergency “to make sure nothing is terribly wrong.”

The 190-pound Connolly said when he was arrested he heard a police officer remark, “This one’s a heavy one.”

Five police officers dragged the 36-year-old from the abortion facility, one holding each limb while another put “both his arms around my neck, kind of in a choke hold,” he told LifeSiteNews.

“I was singing on my way out, but it was getting to where I wasn’t going to be able to sing any more … because I was running out of oxygen.”

An officer asked him if he was going to fit in the car and he replied to “put my legs in first,” related Connolly, who is from St. Paul, Minnesota.

The four women at the Virginia abortion facility were removed with wheelchairs, and the two priests were dragged out, according to spokesperson Larry Cirignano.

Meanwhile, two women entered University of New Mexico Center for Reproductive Health in Albuquerque to offer a woman a red rose and support, but decided based on their conscience that they did not want to get arrested, said spokesperson Tara Shaver.

The two also went to a city abortion facility that does late-term abortions but were blocked from entering by staff, Shaver said.

“They went ahead to talk to some clients that were in the parking lot sitting in their cars … They distributed roses that way,” she added.

“We really just wanted to stand in solidarity with Mary Wagner and the babies and the rest of the rescuers,” Shaver told LifeSiteNews.

“Our community needs to rise up and do more to save the babies here, so hopefully this is just the beginning of you know more direct action to save babies from abortion here.”

The September 15 Red Rose Rescue efforts were modeled on the “pro-life rescue activity of well-known Canadian activist Mary Wagner, who has repeatedly entered Toronto abortion centers and offered red roses to mothers waiting to have their children aborted,” says the group’s press release.

Wagner, who was sentenced Tuesday to 30 months’ probation for charges stemming from her December arrest at a Toronto abortion facility, was present as prayer support at the Michigan rescue.

She has spent five years in jail, including six months awaiting trial for her last arrest, for her peaceful attempts to save women and unborn children from the violence of abortion.

Wagner has said she was herself inspired by Linda Gibbons, who has spent 11 years in jail for her pro-life witness outside Toronto abortion centers.

LifeSiteNews was not able to reach Fr. Moscinski, community secretary for the Franciscan Friars of the Renewal in the Bronx, after his release.

Andrews Bell’s 1985 sentence of five years for trying to unplug an abortion suction machine in a Pensacola, Florida, facility galvanized the “rescue” movement, which at its height in the late 1980s and early 1990s saw thousands of pro-lifers arrested in rescues across the U.S., as well rescues in Canada on a smaller scale.

Migliorino Miller says she “feels strongly” there will be further Red Rose Rescues.