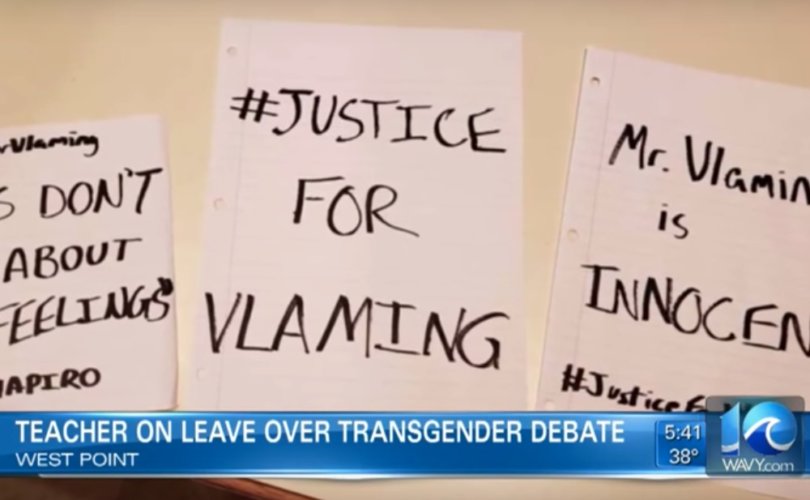 WEST POINT, Virginia, December 7, 2018 (LifeSiteNews) – A school board in the Virginia town of West Point has unanimously voted to fire a high school French teacher who respectfully refused to refer to a female gender-confused student as male, despite the vocal support of other students.

This school year, one of Peter Vlaming’s students at West Point High School came back having “transitioned” to living as a boy over the summer, and wanted to be recognized as such. Vlaming agreed to use the masculine name she had chosen and attempted to avoid referring to her with female pronouns, but said his Christian faith prevented him from calling a girl “he” or “him.”

Nevertheless, the girl says the compromise made her feel “singled out,” and her family complained to the administration, which placed him on administrative leave. At Vlaming’s request, the West Point School Board held a four-hour hearing Thursday evening to consider the matter.

Before an overflow crowd containing many students and parents who supported the embattled teacher, the board voted 5-0 to fire him, the Richmond Times-Dispatch reports.

“That discrimination then leads to creating a hostile learning environment,” West Point schools Superintendent Laura Abel said. “Mr. Vlaming was recommended for termination due to his insubordination and repeated refusal to comply with directives made to him by multiple WPPS administrators.”

“Does this board expect its employees to follow its policies or not?” asked Stacy Haney, a lawyer representing the school district. West Point High Principal Jonathan Hochman claimed he couldn’t “think of a worse way to treat a child than what was happening.”

But Vlaming and his attorney Shawn Voyles noted that not only was there no allegation that the teacher had consciously “misgendered” the student or otherwise acted maliciously toward her, the district’s “nondiscrimination” policy has no specific guidance on gender pronouns.

“One of those rights that is not curtailed” when one becomes a public employee “is to be free from being compelled to speak something that violates your conscience,” Voyles said.

Vlaming himself stressed that he had attempted to find a compromise in the spirit of “mutual tolerance,” but his superiors rejected it to punish him for holding views about sex held by “most of the world for most of human history.”

“That is not tolerance,” he declared. “That is coercion […] I am being punished for what I haven’t said.”

Much of the crowd sided with Vlaming, calling him a “model teacher” who went above and beyond for the kids by working as a soccer coach and bus driver, and bearing “Justice for Mr. Vlaming” signs they had to leave by the door.

“If there’s no policy in place, how can they just let him go?” wondered Jennifer Haynes, a parent at the school. Junior Forrest Rohde has previously called Vlaming a “really nice guy” who “wanted to do everything about his students” and “really does care about his students.” An online petition defending Vlaming is up to 1,928 signatures at the time of this writing.

Vlaming, who taught French at West Point High for almost seven years and is currently working toward a master’s in school administration at the College of William & Mary, says he wants to consult with his lawyer before deciding whether to pursue a wrongful-termination suit. Voyles says the district’s nondiscrimination policy is “unconstitutionally vague.”

“I have to research how we would do that, what that would entail,” Vlaming said. “I do think it’s a serious question of First Amendment rights.”