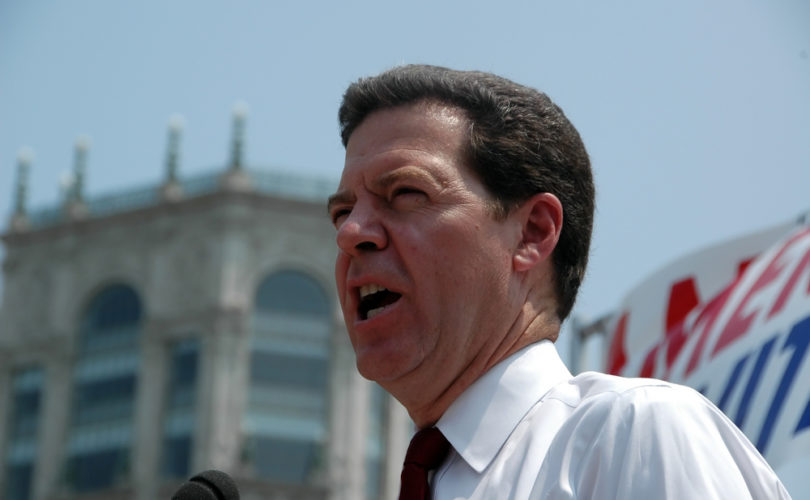 The respect for life at every stage of development, from birth to natural death, is “the foundation of our society” and the surest path to a renewed nation, Kansas Gov. Sam Brownback said in his second inaugural address earlier today.

Yet America is facing a “crisis of the family” that plunges children into poverty, undermines upward mobility, and casts a lingering shadow over the nation's future.

Family breakdown is “a principle issue that must be addressed for us to move forward,” he said after taking the oath of office for the second time in Topeka.

Brownback warned that too many people had failed to prosper due to “an overly paternalistic big government.”

“No government should ever be big enough to substitute for the family,” he said.

While he promised his administration would be “second to none in addressing” fiscal issues, “the reality is the solutions are principally cultural and moral. While it isn’t always easy to talk about, we should be talking about our culture and its renewal.”

A strong commitment to all human life is a strong component of reviving the nation from within, he said:

That starts by recognizing that everybody is a beautiful somebody. Our culture is at its best when we protect and encourage the weakest. Every life – at every stage, in every place – has a dignity beyond our imagining. Every human – especially the most vulnerable, the unborn, the infirm, those ravaged by age and those desperate in despair – should be protected in law, loved, and told repeatedly of their incredible beauty and worth. The equal and immense dignity of every person, all the time, is the foundation of our society. Kansas is great, and great for America, when more and more we honor every human life everywhere.

Defending the unborn has been a pivotal issue for the former U.S. senator. As governor, Brownback signed bills protecting pharmacists' conscience rights, defunding Planned Parenthood, and tightening regulations on abortion providers. Another piece of legislation that the Republican executive signed into law defined life as beginning at the moment of conception, as well as banning sex-selective abortions and strengthening the state's informed consent law. Brownback wrote “Jesus + Mary” across the top of his talking points when discussing how it helped create a “culture of life.”

In his second term, Brownback promised to revitalize the family structure. “One difficulty – that often people don’t want to talk about, because it is hard to talk about – is the crisis of the family,” he said.

“Lack of healthy families is a big part of poverty in our state and nation,” Brownback said. “A big piece” of reducing childhood poverty, he said, “will be to strengthen healthy marriage and family.”

“Ours is a particularly difficult time because our biggest challenges are internal. We must renew the American culture,” he said today. “At its core, the renewal of America comes down to the family.”

Social scientists have found strong correlation between economic success and growing up in an intact family unit. Heritage Foundation researcher Robert Rector has called marriage “America’s Greatest Weapon Against Child Poverty.” He found that marriage boosted a child’s chance of living above the poverty line by 75 percent after controlling for socioeconomic factors.

Only 5.8 percent of married families were living in poverty in 2009, the Family Research Council’s Marriage and Religion Research Institute (MARRI) found. “If the government pledged to reduce family breakdown by just one percent, taxpayers would save around $1.1 billion dollars each year,” said MARRI Director Dr. Pat Fagan.

Poverty has risen and family cohesion has dissipated because Americans have not stood by time-tested values rooted in faith, Brownback said.

“We have focused on personal satisfaction and chance, not obligation and sacrifice. That is not the way 'to the stars,'” he said, a reference to the state's motto: Ad Astra per Aspera (“To the stars, through difficulties”).

Curing this is “not as simple as going back in time,” he said. “We have to figure out how in 2015 we can do better to strengthen family in our country. We need to renew our culture around our Founders' principles of love of God, love of country, and love of family.”

“We are headed to a renewed, stronger culture, to better days,” the Kansas governor said. “And as in the past, we will take America with us.”