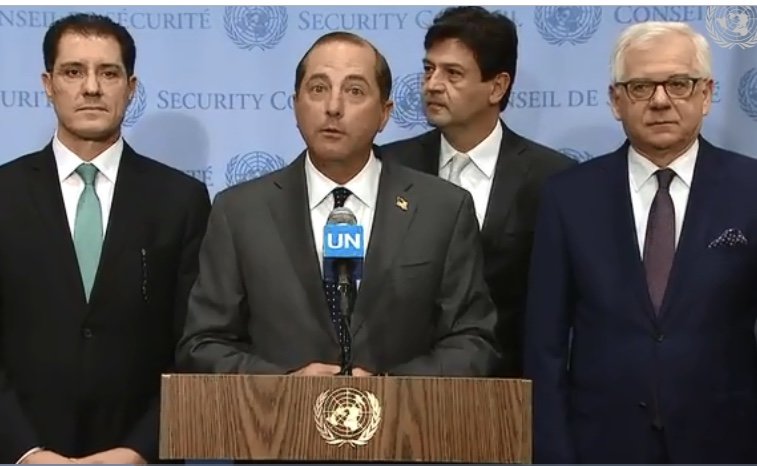 U.S. Secretary for Health and Human Services Alex Azar (center) delivered a joint statement from 19 countries on Monday, September 23, at the United Nations.

NEW YORK, September 23, 2109 (LifeSiteNews) — The United States delivered a joint statement at the United Nations General Assembly today asserting “there is no international right to an abortion” and repudiating the use of ambiguous terms signaling abortion “rights” in UN documents.

The statement also declared that the family is “the foundational institution of society and thus should be supported and strengthened” and affirmed the “protective role of the family” when it comes to sex education of children.

U.S. Secretary for Health and Human Services Alex Azar delivered the statement Monday before the High-Level Meeting on Universal Health Coverage on behalf of “19 countries representing more than 1.3 billion people.”

The “diverse nations here today are united on a positive, constructive goal: focusing the international discourse around healthcare on better health and on the preservation of human life,” said Azar in a preamble to the statement.

Ahead of the #UNGA High-Level Meeting on Universal Health Coverage, I joined colleagues in delivering a joint statement asking Member States to join us in concentrating on topics that unite rather than divide on the issues surrounding access to healthcare. https://t.co/jUIoXXtu5K pic.twitter.com/3KLXHa1cEh

The statement by the 19 signatories urged UN member states to “join us in focusing on the important work of expanding health and opportunities for all people, and especially those in situations of risk and/or vulnerability,” and to concentrate “on topics that unite rather than divide on the critical issues surrounding access to health care,” Azar read.

“We do not support references to ambiguous terms and expressions, such as sexual and reproductive health and rights in U.N. documents, because they can undermine the critical role of the family and promote practices, like abortion, in circumstances that do not enjoy international consensus and which can be misinterpreted by U.N. agencies,” said the statement.

“Such terms do not adequately take into account the key role of the family in health and education, nor the sovereign right of nations to implement health policies according to their national context,” the statement says.

“There is no international right to an abortion and these terms should not be used to promote pro-abortion policies and measures.”

The statement futher asserted that “the family is the foundational institution of society and thus should be supported and strengthened,” and that the signatories “only support sex education that appreciates the protective role of the family in this education and does not condone harmful sexual risks for young people.”

“We therefore request that the U.N., including U.N. agencies, focus on concrete efforts that enjoy broad consensus among member states. To that end, only documents that have been adopted by all Member States should be cited in U.N. resolutions,” the statement read.

“This is an amazing statement, and one that is much needed to counter the aggressive anti-life and anti-family agenda that continues to spread at the United Nations,” said Matthew Wojciechowski, vice president of Campaign Life Coalition, Canada’s national pro-life political lobbying group.

Campaign Life has been lobbying to defend the sanctity of human life at the UN, where it has official Non-Governmental Organization (NGO) status, for more than 20 years.

“We applaud the U.S. administration and the many nations that co-signed this statement for reminding the UN and policy makers, that there is no international right to abortion,”  said Wojciechowski, who oversees Campaign Life’s NGO efforts at the United Nations.

“I also believe that the positions expressed in this statement are not exclusive to these 19 nations. These positions are held by an overwhelming majority of members states, but they are often silenced by a very loud minority of abortion activists inside UN agencies and influential NGOs,” he told LifeSiteNews.