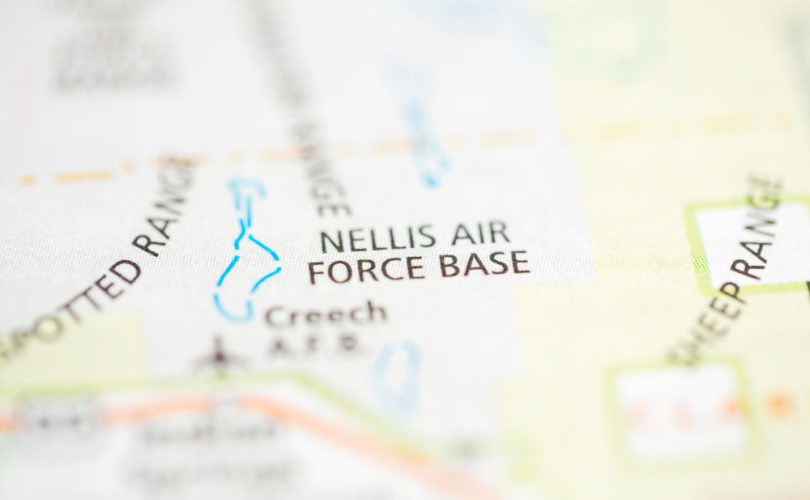 June 23, 2021 (LifeSiteNews) — A major U.S. Air Force Base in Nevada has hosted a drag queen show, claiming the event had been “essential to the morale, cohesion, and readiness of the military.”

“At Nellis Air Force Base last week, pilots were gathered around a different kind of runway,” stated a tweet from the Family Research Council (FRC).

At Nellis Air Force Base last week, pilots were gathered around a different kind of runway. https://t.co/kUUfeS8mE7

The Drag Queen show took place at Nevada’s Nellis Air Force Base, which proudly claims to be “home to the United States Air Force (USAF) Warfare Center, the largest and most demanding advanced air combat training mission in the world.”

As impressive and intimidating as that description may sound, Drag Queens warmly welcomed at Nellis raises serious questions about the image of the nation’s military at home, and around the world.

“To the amusement of America’s enemies, some of our most skilled servicemen and women spent their Thursday night ‘discover[ing] the significance of drag in the LGBT+ community’ at a base club,” wrote FRC President Tony Perkins. “No doubt our mastery of the catwalk will strike terror in the hearts of Iran and China, where leaders must be looking on with glee at this administration’s social preoccupations.”

“This should definitely help the image of the armed forces, and therefore recruiting, among the young straight masculine men who have fought all wars in all of history,” asserted online conservative commentator, Ace of Spades HQ.

The event came to light when a USAF special warfare veteran posted on Twitter a flyer advertising the Drag Queen show. “So Nellis AFB is having a base-sanctioned drag Queen show; isn’t that awesome?” he remarked.

Nellis Air Force Base and the 99th Air Base Wing hosted its first-ever drag show Thursday, June 17, at the Nellis Club. The event was sponsored by a private organization and provided an opportunity for attendees to learn more about the history and significance of drag performance art within the LGBT+ community.

Ensuring our ranks reflect and are inclusive of the American people is essential to the morale, cohesion, and readiness of the military. Nellis Air Force Base is committed to providing and championing an environment that is characterized by equal opportunity, diversity and inclusion.

The event underscores a major cultural shift in the U.S. Military from patriotism to woke-ism; from “God and Country” to “LGBT and BLM.”

“Welcome to the Biden military: you can’t have a Bible on the table, but you can have heels in your footlocker,” noted FRC head Perkins in his online statement. “Of course, the irony is that while the military defends drag queen acts on military installations, they aren’t extending Christian troops the same tolerance.”

[C]onservatives watch helplessly as the proud warfighting ethos that Donald Trump restored is replaced with a circus of LGBT activism. Just ask yourself: when was the last time you read a headline about the military that actually had to do with national defense? Instead, we're talking about climate change, extremism “stand downs,” critical race theory, rainbow flags, and maternity flight suits. The Defense Department, NRO’s John Rossomando warns, is a case study in “misplaced priorities rooted in myths.” It’s a woke military focused on politics, not “lethality and readiness,” one former undersecretary of Defense under George H.W. Bush argued. “It will excel in virtue signaling and fail at winning battles …” Including the one for the heart and soul of America’s proud fighting force.

Under the Biden-Harris administration, the normalizing of homosexuality and transgenderism within the ranks of the U.S. military is accelerating. The Pentagon is moving “full speed ahead toward maximum LGBT inclusion.”

The USAF announced that a Lesbian, Gay, Bisexual, Transgender and Queer/Questioning Initiative Team (LIT) had been formally established under the umbrella of its Barrier Analysis Working Group (BAWG).

At the same time, pictures of the “first ever all gay U.S. Navy helicopter crew” made their way around social media.

Within days of taking office, President Biden formally revoked the Trump administration’s ban on transgender military service. Biden’s new executive order declared (but did not explain how) the military “thrives when it is composed of diverse Americans who can meet the rigorous standards for military service, and an inclusive military strengthens our national security.”

FRC’s Lt. General (Ret.) Jerry Boykin noted that Biden’s reversal of Trump administration policies “has everything to do with President Biden’s LGBT agenda — and nothing to do with military readiness, which should always be the Pentagon's first consideration.”